The FISA report from the DOJ IG is due out next Monday, December 9, 2019.  It’s likely that the DOJ IG Horowitz will address a number of issues, some we already know.

We reported in January of 2018 that a FISA Court Ruling report listed many criminal activities that took place during the Obama years related to the FISA process.

On April 26, 2017, an unsealed FISA Court Ruling unveiled a number of criminal activities that Barack Obama’s FBI and DOJ participated in during his time in office.  The report to date received little attention.  Now interest is brewing due to the recent actions of Congress and the report that is expected to be released in the upcoming weeks.

The FISA Court Ruling shows widespread abuse of the FISA mandate. According to the report, Obama’s FBI and DOJ performed searches on Americans that were against their 4th Amendment rights.  This went on for years.  One paragraph in the report states that 85% of the Section 704 and 705(b) FISA searches made during this time were non-compliant with applicable laws and therefore criminal.

FISA 705 warrants deal with US citizens outside of the country. 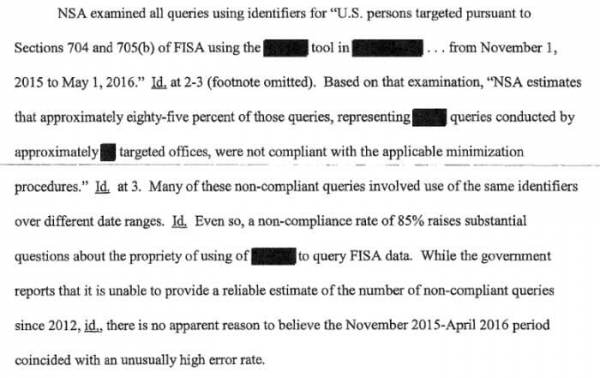 In addition, the report cites that at the same time that Obama’s DOJ and FBI were illegally searching Americans against their rights and unbeknownst to them, Obama’s FBI was providing this information to outside contractors who had no business or legal cause or claim the information.

We then followed this up in April 2018 with a post referencing the same report that showed that the Court stated “James Clapper’s NSA had an institutional “lack of candor”.

It’s been leaked over the past few weeks that at least one attorney at the FBI made fraudulent edits to a FISA application.  His name was Kevin Clinesmith.  Clinesmith was already noted in a prior DOJ IG report.  On page 445 of the DOJ’s IG report on Hillary Clinton’s emails, there is a discussion of what Attorney 2 (Clinesmith) from the FBI texted on October 28, 2016  –

Among the general discussion of political issues by FBI Attorney 2, we identified three instant message exchanges that raised concerns of potential bias.  The first of these exchanges was on October 28, 2016, shortly after Comey’s October 28 letter to Congress that effectively announced the reopening of the Midyear investigation.  FBI Attorney 2 sent similar messages to four different FBI employees. The timestamps of these messages are included below. The messages stated: