Through the first half of 2019, silver significantly underperformed gold. Put another way, gold gained relative to silver – culminating in the gold:silver ratio registering a 27-year high of 95:1.

That market signal was received by the mining industry. Since there are few primary silver producers, and those that do mine silver also typically mine gold and some base metals, precious metals miners had an incentive to invest more into gold production and less into silver.

As silver wasted away in recent years, its bombed-out prices heavily impaired silver mines’ ability to generate operating cash flows and profits. The silver miners were forced to adapt and shifted their focus and capital into adding gold production rather than boosting silver output.

Hamilton notes that the top 17 components of the GlobalX Silver Miners ETF (SIL) produced a total of 72.2 million ounces of silver last quarter, amounting to a 4.4% year over year decline. At the same time, their total gold output increased by 11.9%.

What this suggests is that the silver market is being under-supplied. In fact, the Silver Institute recorded a 2.4% global silver supply shrinkage in 2018.

And things certainly aren’t looking up this year.

Silver’s mining supply problem could be a super-bullish driver of higher prices. Higher prices will eventually incentivize increased production from the mining industry. But it will take much higher prices sustained for some time in order to move the needle of mining production in any significant way.

Silver Mining ETF Sham: These Stocks Are Primarily in Other Metals

As silver miners have become less silver-centric, their stocks can be expected to show less correlation to the silver price. In fact, some stocks that have “silver” in their name derive a large majority of their business outside of the white metal.

Consider Pan American Silver (PAAS), a $3.6 billion company that makes up a 5.4% weighting in the Silver Miners ETF (SIL).

While Pan American is indeed a producer of silver, its business comes mainly from other metals. According to BMO estimates, only 33% of Pan American Silver’s revenue in 2019 will come from silver production.

SIL’s third-largest holding is Korea Zinc. It is base metals smelter, not a silver miner. It processes some silver, but that particular aspect of its business amounts to just 17% of annual revenue.

Rare is the “silver” company that actually derives most of its revenue from silver. Since silver deposits tend to accumulate around other metals, valuable byproducts will be extracted during the mining process. Most silver is produced as a byproduct of mining for base metals, so primary silver mines are few and far between.

One exception is First Majestic Silver (AG). It is the purest major producer, with 62% of its revenue attributable to its namesake metal.

Of course, you will never find a purer silver play than actual .999 pure silver bullion products.

The further your silver-related investments get from the underlying metal, the more they will be driven by other factors you may not necessarily understand or believe in.

When silver starts becoming a hot commodity again, Wall Street will surely supply a bevy of new “silver” equities and exchange-traded derivative products – most of which will serve to divert casual investors away from investing in silver itself.

Silver bullion investors have tended to fare better than silver stock investors in recent years. Since its inception in 2010, the Silver Miners ETF has underperformed the silver price by a net 25%. See the chart below… 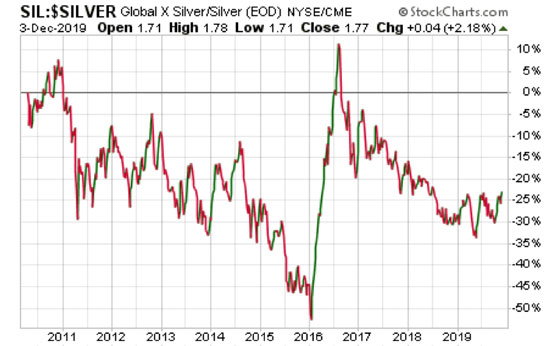 Despite an impressive spike in 2016, silver equities have languished before and since versus silver itself.

Silver companies – especially those that actually derive the bulk of their business from silver – could certainly see the value of their shares multiplied during the next big precious metals run-up. But investing or speculating in mining companies is inherently riskier the owning the metal itself.