Trump has spent the entire last 24 hours tweeting about “Great Jobs”, as has Mr. Coke-up-nose.

What do I think of it?  Well, this table is pretty interesting….

Note that the “official” release says +266k, after ADP said manufacturing lost jobs.  Well…… about that — BLS says manufacturing was +54,000.  Of course 41,000 of those were people who were shown off last month (autoworker strike, remember?) so the actual gain isn’t very large (about +11k) — but that clowns the ADP report. 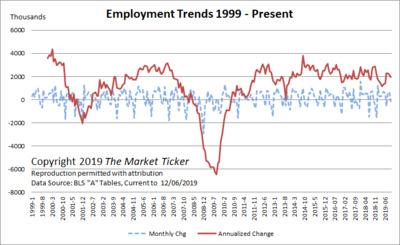 You might notice, however, that the blue line in that chart above is negative.  That’s because it was — the household, unadjusted number was negative 122,000.  All of the so-called “gains” were from the BLS guesses, in other words.

Of much more interest from my point of view is the 12 month population adjusted figure, which currently sits at +618,000.  The high point in recent months, was a spike high in August of +911k; prior to that the general trend had been negative on an absolute basis for the past two years.

What’s the relevance of that date?

Quite a bit, actually.  It came approximately correlated with the “consumer-impacting” tariffs imposed on China and clowns those who said it would trash US jobs and productivity.

It in fact did the exact opposite; it gave a hell of a lift to US jobs on a 12 month adjusted basis — and that’s Round #1, with the second round coming in here in a week or so.

Were there some losses?  Small ones, in mining and wholesale trade (big surprise.)  But gains everywhere else predominated, including non-durables (which exceeded the losses from wholesale trade) and, in addition, transportation and warehousing went up materially.  Granted some of this is seasonal but BLS claims to be adjusting for that.  So muc hfor the “oh we’re all gonna die” nonsense.

I can find one place where the tariffs are biting: Non-incorporated self-employed agricultural workers.  These are 1099 contractors or single-person proprietors, and they’re getting hammered.  However, the larger picture is that the incorporated farming operations are not being hurt at all employment-wise.  This, in turn, means if you want to address actual issues with tariff-related job loss you don’t do it with the corporate farms — you do it only with unincorporated individuals.  That’s what the data says, but we know how Washington works: Give a huge amount of taxpayer money to big corporate Ag, and a bit trickles to individuals.  **** Congress and Trump sideways; the data is clear.

As expected for November the non-HS graduate continued to improve — that’s seasonal hiring for Christmas, mostly.  One caution — having some college experience but not a bachelors has not been a good thing over the last 12 months, nor has being a High School drop-out.  Everyone else has done ok.  Pick a direction and if you’re not going to go to college (and you shouldn’t if you have to go into debt to get a degree) learn a trade.