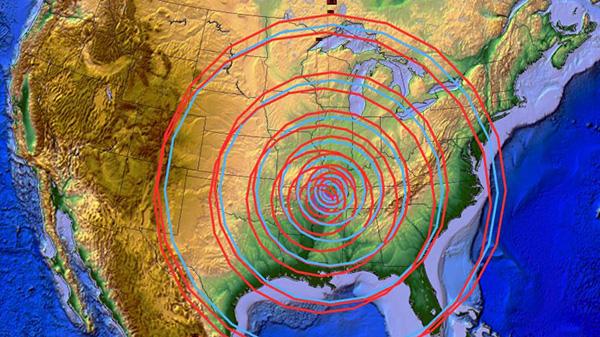 Mt. Rainier and the New Madrid fault zone are both shaking, and a catastrophic seismic event at either location would cause death and destruction on an unimaginable scale.  Mt. Rainier has been called “one of the most dangerous volcanoes in the world”, and scientists tell us that it is just a matter of time before a major eruption occurs.  When that day finally arrives, Mt. Rainier has the potential to bury hundreds of square miles with a colossal tsunami of super-heated mud that is literally several hundred feet deep.  And since Mt. Rainier is very close to major population centers, we are talking about the potential for the worst disaster that we have seen in modern American history.  But a massive earthquake along the New Madrid fault zone actually has the potential to be far worse.  A very deep scar under the ground that was created when North America was originally formed has made that part of the country very mechanically weak, and many experts believe that a big enough earthquake along that fault zone could literally rip the United States in half.

But before we discuss the New Madrid fault zone, let’s talk about what just happened at Mt. Rainier first.

According to the USGS, Mt. Rainier was hit by a magnitude 3.6 earthquake on Sunday afternoon…

After a spurt of seismic activity this weekend, Mount Rainier National Park was shaken by a 3.6 magnitude earthquake Sunday afternoon.

The quake hit at 12:31 p.m. and was felt as far as Kent, nearly 80 miles away, the U.S. Geological Survey reported. The relatively shallow quake was centered roughly a mile beneath the earth’s surface.

In addition to that quake, there have been quite a few others in recent days.

In fact, it is being reported that Mt. Rainier has been hit by “more than a dozen” earthquakes since Thanksgiving day.

The Seattle Times is assuring us that this is perfectly normal, but they are also warning their readers that they “should prepare for what might happen in the event of an eruption” just in case…

Regardless, people living near Mount Rainier should prepare for what might happen in the event of an eruption, said Wes Thelen, a research seismologist at the Cascade Volcano Observatory. Specifically, an eruption could cause lahars — large volcanic mudflows — to rip down the side of the mountain.

Many of my readers clearly remember the eruption of Mount St. Helens in 1980, but a catastrophic eruption of Mt. Rainier would be so much worse that the two events would not even be worth comparing.  The following comes from Wikipedia…

If Mt. Rainier were to erupt as powerfully as Mount St. Helens did in its May 18, 1980 eruption, the effect would be cumulatively greater, because of the far more massive amounts of glacial ice locked on the volcano compared to Mount St. Helens,[40] the vastly more heavily populated areas surrounding Rainier, and the simple fact that Mt Rainier is a much bigger volcano, almost twice the size of St. Helens.[49] Lahars from Rainier pose the most risk to life and property,[50] as many communities lie atop older lahar deposits. According to the United States Geological Survey (USGS), about 150,000 people live on top of old lahar deposits of Rainier.[9] Not only is there much ice atop the volcano, the volcano is also slowly being weakened by hydrothermal activity. According to Geoff Clayton, a geologist with a Washington State Geology firm, RH2 Engineering, a repeat of the 5000-year-old Osceola Mudflow would destroy Enumclaw, Orting, Kent, Auburn, Puyallup, Sumner and all of Renton.[39] Such a mudflow might also reach down the Duwamish estuary and destroy parts of downtown Seattle, and cause tsunami in Puget Sound and Lake Washington.[51] Rainier is also capable of producing pyroclastic flows and expelling lava.[51]

A lahar is essentially a giant tsunami of super-heated mud, and they can be hundreds of feet high.  If you live in that region, you might be thinking that you will just outrun any lahar that is headed your way, but the truth is that the highways will instantly be jammed once an eruption happens and a lahar can travel at speeds of up to 50 miles per hour.  The following is how one author described the danger that those living in the area could potentially be facing…

The numerous towns and cities that occupy the surrounding valley would all be at risk for not only severe destruction, but complete annihilation. Residents of cities like Orting, Sumner, Buckley, and Enumclaw are estimated to have no more than 30 minutes before the lahar, speeding down from the many rivers that flow from Mount Rainier, buries their homes and businesses beneath as much as 30 feet of mud and debris. Even the larger cities like Auburn, Puyallup, and Tacoma itself are not safe. Auburn and Puyallup, with nearly 80,000 residents between them, would be covered in 20 feet of mud in less than an hour, and Tacoma, at almost 200,000, is estimated to be hit with nearly 10 feet from the lahar.

As you can see, the death and destruction would be off the charts, and let us hope that such a disaster does not arrive any time soon.

And as I mentioned earlier, a major earthquake along the New Madrid fault zone has the potential to create even greater death and destruction.