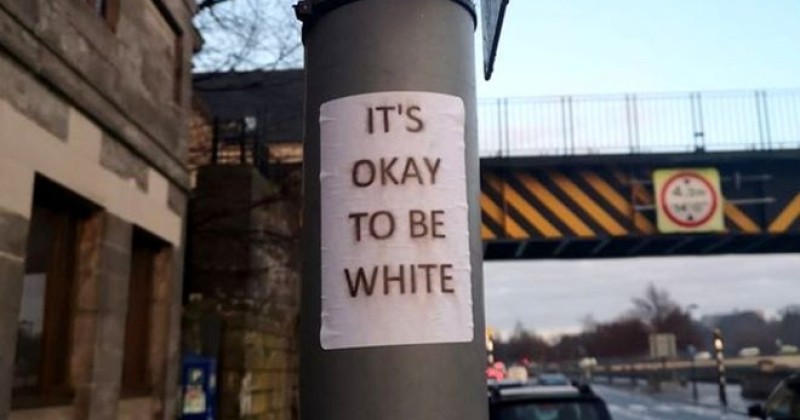 Yet another moral panic caused by 4chan troll.

Police are investigating fliers that appeared in a Scottish city that read “It’s okay to be white,” with one member of Parliament calling them “atrocious.”

The posters appeared in Perth city center and were plastered all over lampposts and drainpipes throughout the city over the weekend.

Perth Against Racism said it was alerted to the posters by locals who said they made them feel “unsafe.”

“It’s sickening and disgusting to know that people think like this,” one person told the group, adding that she was now worried for her non-white daughters.

John Swinney, MSP for Perthshire North, branded the signs “atrocious,” adding, “We must stand together to resist this unacceptable material.”

“Although no complaint has been made to police regarding these posters, they have been brought to our attention and officers are currently looking into the matter,” a Police Scotland spokeswoman told the BBC.

The “It’s okay to be white” poster campaign was started by 4chan trolls in an attempt to bait the media into creating a moral panic and whipping up racial hysteria.

They appear to have been successful. Every time the posters appear in any city, the media and locals behave as if the Third Reich is about to return.

Many have commented that the stunt is particularly cunning because it forces the left to adopt the ideologically bigoted view that it isn’t ‘okay’ to be white, thus revealing them to be the actual racists.