In the long history of governments and central banks deceiving the people, August 15 1971 was just another date in the calendar. Throughout history, the ruling elite has always cheated the people. But the leaders’ irresponsible actions are always revealed as in the end they always fail.

Still, in modern times August 15th 1971 was a monumental day. That day was not the end of the financial system, and not even the beginning of the end. But it was perhaps the end of the beginning. Historians will recognise this paraphrasing of Churchill after the Allies’ El Alamein victory in 1942.

The beginning was the creation of the Fed in 1913 in order for private bankers to take control of the financial system and money creation. With August 1971 being the end of the beginning, we have thereafter seen the final phase lasting soon half a century and creating the most ginormous super bubble that the world has ever seen. 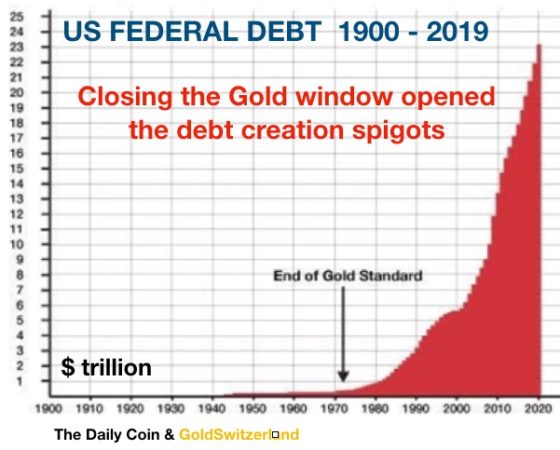 WE ARE NOW APPROACHING THE END

So we are now coming to the end, after over 100 years of a fake financial system, created and controlled by the bankers for their benefit. The build up has been long but the end will be fast and extremely painful. The speed at which the collapse will happen will take the world by surprise. The final phase happens at an exponential rate as I explained in my article from 2017 about filling a stadium with water:

“EXPONENTIAL MOVES ARE TERMINAL
There is a more scientific illustration how these exponential moves occur and also how they end.
Imagine a football stadium which is filled with water. Every minute one drop is added. The number of drops doubles every minute. Thus it goes from 1 to 2, 4, 8 16 etc. So how long would it take to fill the entire stadium? One day, one month or a year? No it would be a lot quicker and only take 50 minutes! That in itself is hard to understand but even more interestingly, how full is the stadium after 45 minutes? Most people would guess 75-90%. Totally wrong. After 45 minutes the stadium is only 7% full! In the final 5 minutes the stadium goes from 7% full to 100% full.”

GLOBAL DEBT HAS TREBLED IN THE 2000S

It has taken 107 years to create global debts and liabilities of over $2 quadrillion with most of it generated in the last 25 years.

Just look at global debt which has trebled in this century from $80 trillion to $258 trillion. This is another example of the final phase being exponential. 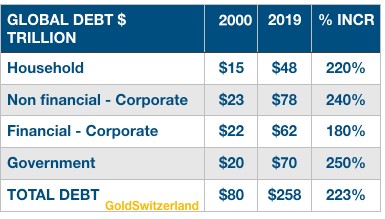 Although debt has gone up 3X in the last 20 years, what we will see in the final 5 years will be even more spectacular. As Central Banks attempt to save the system, they are now embarking on the biggest money creation in history. Saving the financial system will require more than $2 quadrillion including derivatives and the shadow banking system. Hyperinflation will multiply these figures many times.

THE END OF THE FINAL PHASE WILL BE QUICK

I would be surprised if the final phase lasts more than 5 years. It doesn’t take longer than that for asset and debt bubbles to implode. So by 2025 the total financial system will not only be unrecognisable but also a mere shadow of what it is today.

What the world will experience is the inevitable effect of 107 years of false money, fake assets, unlimited debt and false moral and ethical values.

The fact that it will all implode over a short period like 5 years, doesn’t mean that the problems are over by then. It just means that debt and asset values have all disappeared into a black hole. The debts will be gone and all the false paper assets like $1.5 quadrillion of derivatives will be gone too. Virtually all bonds will be worthless also. Many good companies will survive but profits will crash and so will P/E ratios. The result will be that stock prices will come down by 95% on average in real terms.

A world economy which was based on fake money and false values will take a very long time to recover to where we are today. It will likely be decades or even longer. Remember that the Dark Ages lasted for 500 years after the fall of the Roman Empire.

We have learnt during this final phase that it is just not possible to soundly grow an economy based on debt and printed money. Every government that has attempted this has always been caught red-handed. And this is guaranteed to happen to the current fraudulent system too.

TAXATION IS A CONFISCATORY LEVY

Throughout history, the rulers have used numerous methods to swindle their citizens. Taxation has been the most obvious of all tricks. Taxation is a confiscatory fee on the people, often levied to finance the rulers’ extravagances and wars. The first known taxation was in Egypt already 3,000 years ago. Since then, there have been a multitude of taxes on goods or trade.

In England and Wales, in 1696, a window tax was introduced. The purpose was a tax based on the prosperity of the taxpayer. Initially it was a flat tax of 2 shillings per house (£13 or $16 in today’s money). There was also a variable part above 10 windows starting at 4 shillings. People objected to an income tax since the disclosure of personal income was considered a government intrusion into private matters.

How refreshing to hear the extremely sensible values of confidentiality and privacy which prevailed at that time. What a difference to today’s world when governments are prying into our personal affairs and control the people’s every move with nothing being confidential or private. Orwell was so right when in 1949 he wrote 1984, as we now have BIG BROTHER watching every step we take. But that will end too. As the system collapses so will governments’ ability to police the people. The state will run out of money and systems necessary to control the people.

INCOME TAX IS A RECENT PHENOMENON

So for 1000s of years most nations functioned with no or very low rates of taxation. There is no reason why that couldn’t work again. But obviously not based on the incredible waste and bureaucracy in the system today. A complete revision of the tax system with a sales tax of say 10% and corporate rate of also 10% would most probably work extremely well if all the waste in the system was eliminated. People would then pay for services they used like roads.

DEBASEMENT OF CURRENCIES IS A FORM OF TAX ON THE PEOPLE

Except for confiscatory taxation, the debasement of fiat or paper money is the most common method that governments use to defraud their people. By destroying the value of money, ordinary people are robbed of their savings and their pensions. Only the wealthy can take advantage of this. They invest in asset markets, often with leverage, like stocks or property which are benefiting from the credit expansion caused by the currency debasement.

Even though the wealthy will see a colossal destruction of their wealth, they will still be left with sizeable assets as long as they don’t have major debt. Buildings and land held by the rich will still exist although worth a lot less. But when Marxist/Socialist governments take over, they will either expropriate the properties of the wealthy or tax them so highly that owners can’t afford to keep them. The UK Labour leader Corbyn has already suggested that luxury properties in Central London should be occupied by ordinary people and not the current wealthy residents.

Most ordinary people have no assets but only debt. For the ones who have houses or apartments with a mortgage, the value of their property is likely to be lower than the debt. The question is if governments will legislate to let defaulting property owners stay in their houses? But what about people who rent accommodation, will they be allowed to stay too in the coming Marxist environment?

The effects of letting everyone stay in their property even if they can’t service the debt or pay the rent will obviously lead to bank defaults. So central banks will need to print more money for this purpose to prop up failing banks.

Revolutions or social unrest are often the result of economic misery for ordinary people combined with disgruntlement with the leading elite and the wealthy. In most Western countries, but also in for example China and Russia, the gap between the rich and the poor has reached extreme proportions. The graph below shows the gap in the USA between the wealthiest 0.1% and the bottom 90%. In the mid 1980s the bottom 90% owned 37% and the top 0.1%, 10% of the assets. As the graph shows, this gap has now narrowed to the extent that the top 0.1% own as many assets as the bottom 90%. 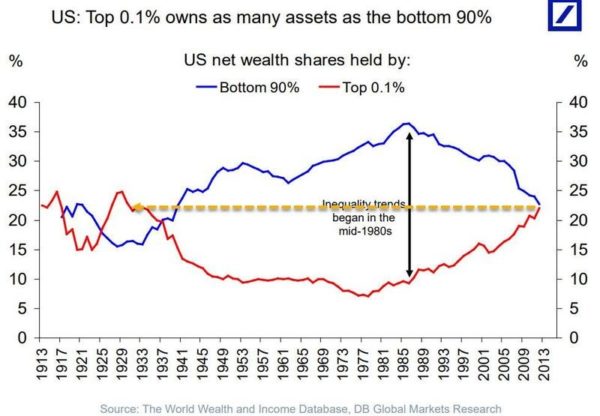 The income gains in the US show the same gap widening between the top 1% and the rest. As the graph below shows the top 1% has seen a 350% growth in income since 1980 whilst the middle 60% has only achieved a 47% increase in the same period. 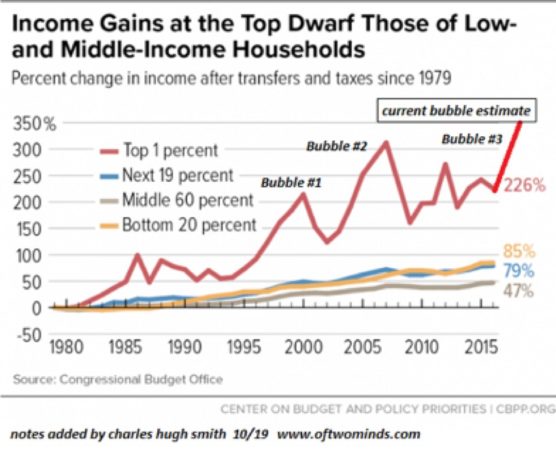 This massive concentration of wealth and income is bad for the economy but more importantly very dangerous. When the economic downturn starts in the next few years, the economic misery of the poor and the hungry is likely to lead to major social unrest and even civil war. The high number of recent immigrants in many countries today could also lead to neo-nazi or other right wing groups emerging.

So in all, we are rapidly approaching a very unstable and also dangerous period both economically and socially. We have already seen major protests and violence today around the world plus a significant increase in crime. Many governments can’t cope with the present level of crime and protests. In Sweden for example the prisons are full already. When these problems escalate, the world is likely to become a less safe place as governments lose control of law and order.