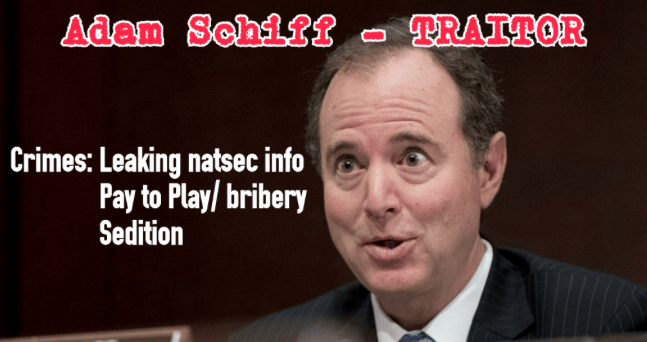 …Collapse the American Republic and Subjugate the U.S. Citizenry to the Globalist Cabal

Really, how does a thoroughly corrupt California Congressman rise to the level of House Intel Chairman, who then goes on a crime spree — IN BROAD DAYLIGHT — since the very day the Democrats took over the House, who then leads a transparently fraudulent Impeachment hoax that is on the verge of seeing a Senate trial?!

There are several checks and balances in the American governmental process that were supposed to prevent this dangerous type of flagrant abuse and misuse of power.

Therefore, there can be only one explanation for a career criminal like Adam Schiff being given the power to throw the entire U.S. Federal Government into political chaos and institutional pandemonium.

That Shifty Schiff has been able to carry out such an obvious criminal conspiracy to overthrow the POTUS — during prime time — is so inconceivable and beyond the pall that there can be only one reason.

That Schiff continues to lead an utterly fake impeachment process while both Democrats crow and Republican scowl has never happened before.  Hence, the real power and money behind Schiff’s unparalleled seditious plot to overthrow Trump must be massive.  And it is!

The New World Order globalist cabal that Schiff works for not only controls all of Deep State, it’s also directed by the notorious and all-powerful International Banking Cartel. 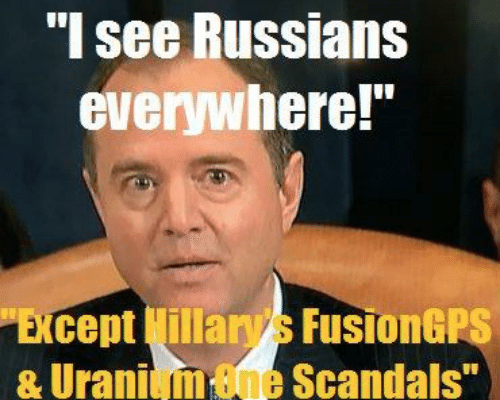 It’s of paramount importance to understand that all of Schiff’s congressional crime sprees are being executed in order to fan the flames of Russophobia.  Truly, the impeachment sham is much more about taking down President Putin and conquering Russia than it is about removing Trump. See: Deep State’s Impeachment Coup Much More Than Overthrowing Trump

Trump’s stated intentions to make peace with Russia and work with the Kremlin were diametrically opposed to the NWO scheme to re-start the Cold War as a prelude to triggering the hot phase of World War III.  This is precisely why Rep. Schiff has been thrust into the MSM limelight.

However, there are specific reasons why Schiff continually demonstrates an extreme hatred toward Russia.  The following critical exposé reveals that highly concealed Adam Schiff back story.

Only with the vital historical background imparted by the preceding link can IMPEACHMENTgate make any sense.

The upshot of this analysis is that Adam Schiff was chosen as the point-man in the Congress to lead a soft coup against the president, just as he has long been an easily manipulated puppet loyal to foreign powers whose only interest is the total destruction of the United States of America.

By the way, that little factoid makes Adam Schiff a stone-cold

Not only has Schiff proven himself to be a loyal Deep State operative and undercover CIA agent, he has also exposed himself as a puppet of the New World Order globalist cabal.  Most significantly is that Schiff’s financial support indicates that he’s a very willing pawn of the George Soros money machine, who is really a bagman for the Rothschild Crime Syndicate which is a HUGE backer of the Clinton Crime Family.

Schiff’s California district includes Hollywood which is the capital of the Pedogate control mechanism by which so many American politicians and VIPs are blackmailed and bribed to stealthily advance the treasonous NWO agenda.  This is why the Intel Chair has shown an inordinate willingness to commit any crime — no matter how reckless — as well as engage any corruption necessary to carry out their nefarious schemes.

KEY POINT: There is now a HUGE Congressional scandal known as SCHIFFgate: A Deep State Op & CIA-directed Coup Goes Prime Time Led by a Clown.  It behooves every patriot to comprehend the true depth and breadth of this Deep State deception.

What the body politic has been witnessing since Trump’s inauguration is a non-stop coup d’état.  This soft coup is being run by rogue elements within the C.I.A., FBI, DoJ, DIA and other major organs within the U.S. Intelligence Community as well as the Democrats.  The CIA’s Mockingbird Media is providing both propaganda and cover for every single crime perpetrated in the conduct of this naked subversion of the White House by Deep State. See: SUPER-PSYOP! The whole thing was set up as a CIA-directed presidential entrapment scheme.

Let’s be very clear: this Democrat-led communist revolution is rapidly unfolding to the point where everything will change between now and Election Day 2020—EVERYTHING!