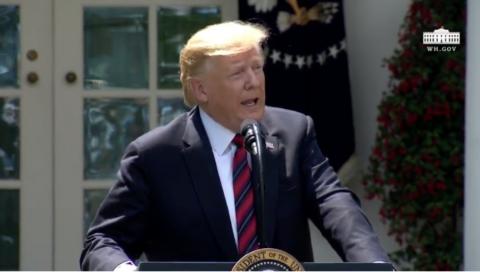 Actor Robert Redford has gone on another op-ed rant against President Donald Trump, accusing our Commander-in-Chief of being “dictator-like” and running a “monarchy in disguise.”

Writing for NBC News‘ “THINK,” the 83-year-old filmmaker lamented how he supposedly gave Trump a chance, but that Trump ultimately failed and now needs to be removed from office.

“It’s time for Trump to go – along with those in Congress who have chosen party loyalty over their oath to ‘solemnly affirm’ their support for the Constitution of the United States,” he added. “And it’s up to us to make that happen, through the power of our votes.”

Though Trump was not Redford’s “choice” for president, the legacy entertainment icon claims he “thought it only fair to give the guy a chance.” But Trump hasn’t met Redford’s expectations, so it’s time for him to be impeached, apparently.

“… almost instantly [Trump] began to disappoint and then alarm me,” Redford whined in his editorial. “I don’t think I’m alone.”

“What is happening, right now, is so deeply disturbing that instead of the United States of America, we are now defined as the Divided States of America,” Redford further claims, blaming all of this country’s current woes not on the lying mainstream media, but squarely on Trump.

“Leaders on both sides lack the fundamental courage to cross political aisles on behalf of what is good for the American people.”

Redford went on to liken Trump to the usual suspects, including Adolph Hitler, Richard Nixon, and Osama Bin Laden.

Back in April, Redford wrote an earlier op-ed for TIME that was even more hysterical. At the time, Redford claimed that it was pointless to try to impeach Trump because, unless Trump decided to accept the theory of man-made climate change, then there “will be no planet to live on” anyway.

For more related news about celebrity mental illness, be sure to check out Stupid.news.

Trump is just like Hitler, declare loud women at The View

Not to be outdone, the cackling hags from The View recently went on their own rant against Trump, also likening him to Hitler.

Upset that Facebook didn’t remove the Trump campaign’s social media advertising, Whoopi Goldberg and Joy Behar accused Zuckerberg of kowtowing to a dictator, adding that if Facebook were around during World War II, the platform would have given Hitler his own fan page.

“I think Facebook would give Hitler his own fan page … just like all the networks gave air time to Trump before they knew what a bad idea he was,” Behar squealed in disgust.

In Behar’s view, “now is the time to correct the situation” by impeaching Trump, and probably Mike Pence as well, and replacing them with Nancy Pelosi and whomever she might choose as her running mate, presumably during one of her many drunken stupors.