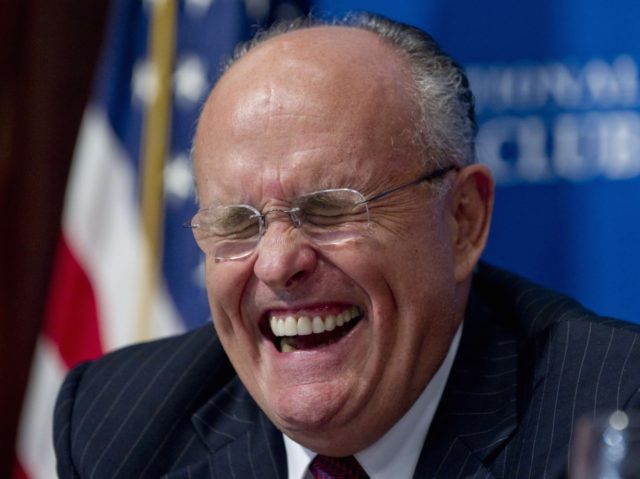 Giuliani traveled to Ukraine to meet with Shokin and other former prosecutors, according to the New York Times. He was reportedly filming a documentary with the One America News Network (OANN), according to ABC News.

Using a corrupt prosecutor as witness…

In May, the Times reported that Giuliani had been planning a trip to Ukraine “to push the incoming government in Kiev to press ahead with investigations that he hopes will benefit Mr. Trump.” He canceled his trip, however.

Giuliani’s interest in Ukraine stems from his effort to defend President Trump against claims of “Russia collusion,” which were ultimately debunked by Special Counsel Robert Mueller’s report, which was released in April. Some allegations of “Russia collusion” were reportedly fueled by Ukrainian sources working with Democrats, allegedly through a Democratic National Committee (DNC) contractor and former British spy Christopher Steele. Giuliani apparently hoped to use information gathered in Ukraine to defend Trump by explaining how the “Russia collusion” narrative began.

In addition, Giuliani became interested in the story of former Vice President Joe Biden’s intervention in Ukraine to ensure that Shokin was fired, during a time when Biden’s son, Hunter, was on the board of Ukrainian gas company Burisma. As Biden himself later recalled, the Vice President personally threatened Ukraine with the loss of $1 billion in U.S. loan guarantees unless Shokin was fired in 2016.

As witnesses testified in the House Intelligence Committee last month, Shokin — widely seen as corrupt — was in charge of an inquiry into Burisma that was “dormant,” though never closed.

Some witnesses believed that Giuliani was urging the Ukrainian government to investigate the Bidens. That claim forms a core part of the allegations against Trump in the ongoing impeachment inquiry, in which the president is being accused of withholding aid to Ukraine in exchange for investigations into Biden, a potential 2020 opponent.

Giuliani is also accused of using information from another former prosecutor, Yuriy Lutsenko, to “smear” former U.S. Ambassador to Ukraine Marie Yovanovitch, whom the president recalled after a negative story ran in The Hill.

Moreover, two of Giuliani’s Ukrainian-American associates, whom he had allegedly been using to make contacts in the country, have been indicted on unrelated federal campaign finance charges. Media reports have speculated that Giuliani himself is under federal investigation.