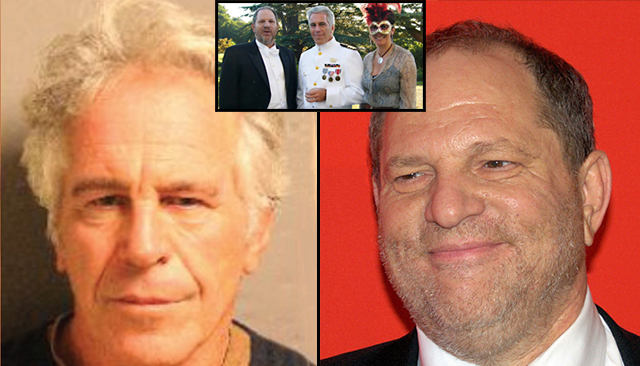 Suspected blackmailer of the global elite Jeffrey Epstein and Hollywood mogul Harvey Weinstein appear to have been very close friends.

[…] As they mingled with royalty at Beatrice’s 18th, police had already prepared an arrest warrant for Epstein on child sex abuse charges and raided his Florida mansion.

Eight days after the billionaire posed in a US Navy Seal uniform for this snap he was in cuffs.

Tuxedo-wearing Weinstein is due in court next month accused of a sex offence in 2006 – the same year this photo was taken.

Maxwell, seen in a gold mask and red headdress, is now being investigated by the FBI on suspicion of procuring girls for Epstein.

Barak was pictured entering Epstein’s house in New York (which was given to Epstein by pro-Israel billionaire and alleged Mega Group member Les Wexner) in 2016 and reportedly visited Epstein’s apartment building (which was owned by Epstein’s mysterious brother Mark) repeatedly.

Barak entered into a “partnership worth millions” with Epstein in 2015 involving the shady Israeli firm Carbyne. An Epstein-controlled company also reportedly donated $40,000 to Barak’s political activity.

As Ronan Farrow reported in 2017, Harvey Weinstein on Ehud Barak’s recommendation hired Black Cube, an Israeli firm comprised of “former” Mossad agents, to allegedly spy on and intimidate his accusers into silence.

Ex-NBC producer Rich McHugh, who worked together with Ronan Farrow to expose Weinstein, claimed Black Cube and agents of another intelligence firm hacked his phone, broke into his home and messed with his phone wires.