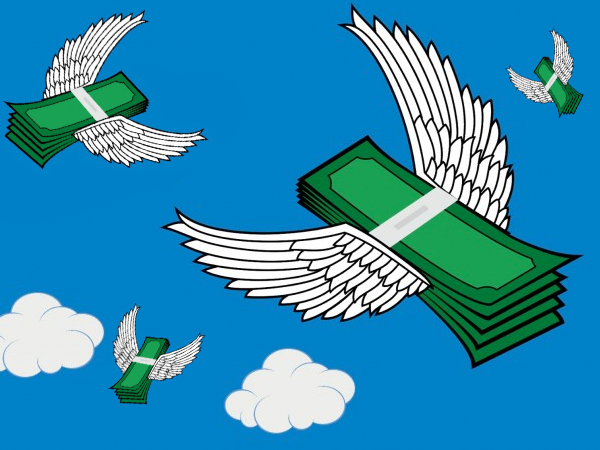 As usual, if we look beyond the government’s official numbers, we can see that “real” inflation has risen to almost 6% (blue line on the chart below):

The reason for the difference in inflation measurement boils down to a method adjustment in the 1990s that moved away from the idea of “the cost of maintaining a constant standard of living.”

But whether you use the official method or the older 1990 method, the items being measured still include food, energy, and other selected consumer items.

The symmetric 2% rate that Fed Chair Jerome Powell relies on isn’t exactly “low” as he claims. According to Ryan McMaken, it still means a lot of lost wealth for the average person:

If central banks are able to nail the “low” 2 percent inflation level, we’d still end up with a dollar that loses nearly half its value in 20 years. […] For regular people who can’t count on a 4 percent return on their investments, and who rely on banks which pay around 1 percent, this means a lot of lost wealth…

And there is likely to be more “lost wealth” in the near future, since Chair Powell has stated that the Fed may let inflation run as high as 3% into 2020.

Of course, inflation affects some areas more than others, and there are at least three sectors which have been infected by extreme price inflation.

The official CPI rate has risen about 1% net over the last decade. But that modest increase has been dramatically outpaced by price increases in healthcare, housing, and higher education.

You can see this result here: 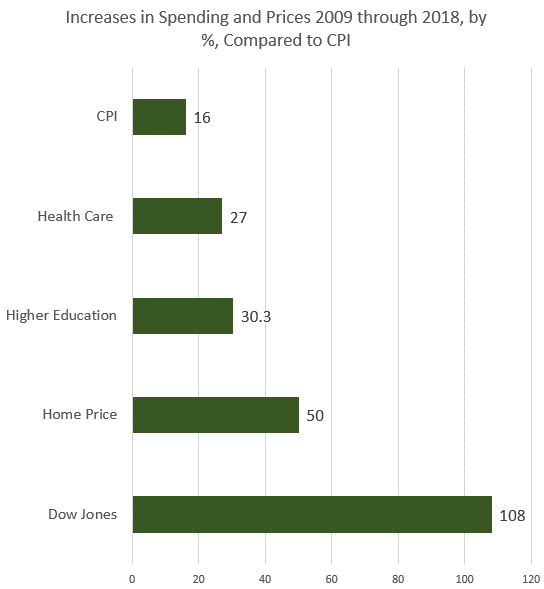 According to an article on Mises.org, “Higher education increased 30 percent over the past decade. At the same time, health care spending per capita increased 27 percent. Even bigger increases are found in asset prices. According to Case-Shiller, for example, the twenty-city housing index rose 50 percent from 2009 to 2018. During the same period, the Dow Jones rose 108 percent.”

Surprisingly, home inflation has continued even while the official U.S. homeownership rate has dropped 2% since 2010.

Unfortunately, renting won’t help you escape rising home prices. Housing rent has jumped anywhere from 22.5% to 92.6% over the last decade in the top 50 cities across the U.S., according to Washington Business Journal.

Add it all up, and it appears that the “basket of goods” the Fed relies on to report its “low” inflation rate may not include everything it should.

Obviously, there is a limit to how much price inflation the American consumer can bear. Out-of-control prices could drive consumers out of certain overpriced markets. But because the U.S. economy relies on consumer spending, any reduction could quickly become detrimental.

Make Sure Your Retirement Doesn’t Get Turned Upside Down

No matter what the actual inflation rate is, one thing is certain… it’s on the rise. And with inflation rates being allowed to “run hot” again, who knows how much control the Fed actually has over effective monetary policy?