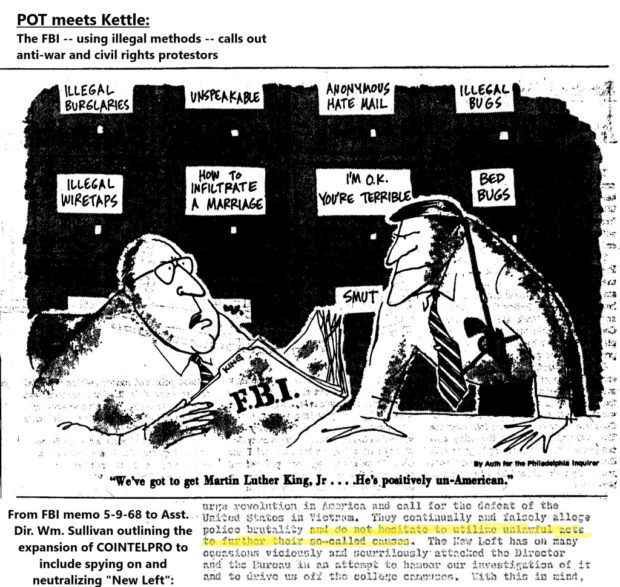 Unbeknownst to the public – or, initially in the 1950s, even the higher-level officials of the Department of Justice – the FBI’s home-grown COINTELPRO (Code for “Counterintelligence Program”) created an official policy to use illegal forms of surveillance such as bugging devices and wiretapping.  By the mid-1960s, it was subsequently expanded to allow the use of other illegal tactics, solely on the whims of J. Edgar Hoover.  As will be demonstrated below, it would soon adopt the most horrid, inhumane types of torture normally associated with Hitler’s Gestapo or Stalin’s Gulag Archipelago, though these operations were mostly “sub-contracted” to local thugs for execution, as we will shortly describe.  That these highly illegal and unconstitutional acts took place under Lyndon B. Johnson’s regime should not go unnoticed, as it should be clear that his well-known propensity for micromanaging all such activities means that the order more than likely came from him, just as his calls to “Kill More Cong” ultimately resulted in Operation Phoenix and the series of atrocities against innocent Vietnamese civilians that produced the 1968 My Lai 4 Massacre that killed 504 women, children and old men.

The use of these devices under such loose methods went well beyond “legal” constraints – they even vaulted over the higher threshold of the Fourth Amendment[1] of the Constitution – and continued, essentially unnoticed and/or uncontrolled by all of Hoover’s superiors, at least until Robert F. Kennedy finally attempted to establish control, with limited success.  Hoover, it seems, had conferred unto himself, rather than the judicial system, the authority to issue “warrants” under the amendment, where it delineates the conditions under which they may be properly issued. Perhaps it was under that leap-of-logic that he had taken the liberty of renaming his office as the “Seat of Government” (S.O.G.) as a means of justifying, to himself, the arrogated gravitas of his rarified position of paramount authority.

The FBI’s secret COINTELPRO had begun in 1956, just as Martin Luther King Jr. had become a national figure as the most famed civil rights activist.  It continued to secretly grow – propelled to a Gestapo-like leviathan during the 1960s Johnson administration – until it was exposed in March, 1971 when the FBI’s field office in Media, Pennsylvania was burglarized. It was merely one of the many secrets discovered in that break-in and passed to the news media.  The burglars belonged to an activist group called the “Citizens’ Commission to Investigate the FBI.” The burglary occurred on a night when a large part of the population was distracted due to a boxing match called “The Fight of the Century” between Joe Frazier and Muhammad Ali (Ali himself was one of the thousands of people targeted by the program because of his support for the anti-war movement).

Among other celebrities caught up in Hoover’s net were ex-Beatles singer John Lennon,[2] other early rock stars such as Janis Joplin and Jimi Hendrix, folk singer Pete Seeger, painter Pablo Picasso, comic actor and filmmaker Charlie Chaplin, comedian Lenny Bruce and poet Allen Ginsberg.  The early deaths of many of the rock musicians of the period, including Jim Morrison, were long-suspected to be related to the general paranoia suffered by many political leaders in those days. Mae Brussell had begun tracking the litany of such names in the late 60s and continued through the 1970s, stating what is now generally accepted by all: “the United States is secretly run by powerful groups that will stop at nothing to maintain control,” a statement she made which was published by the Monterey (California) Herald, Oct. 4, 1988.[3]

Still another entangled star, the child-actress Jean Seberg — “discovered” by Otto Preminger at age 17 in 1956 – was also targeted by the FBI in 1968 for her financial support of the Black Panthers. She spent a decade in turmoil over the harassment – including being repeatedly characterized as “the alleged promiscuous and sex-perverted white actress.” She was falsely accused of being impregnated by one of the Panthers (the white baby, whose father was Jean’s husband, diplomat Romain Gary, was stillborn); her friends said she never recovered from that experience, and continued to be harassed by the FBI until, at age 40, Jean Seberg committed suicide in Paris, in 1979.[4]

The FBI Sets up a Nationwide Targeting Program Aimed at Student Protestors and “The New Left” Generally, And Thomas Cahill Specifically

Among the many thousands of lesser-known people around the country who were similarly targeted was a San Antonio writer, photographer, magazine editor and anti-war protestor named Thomas Cahill. Cahill wrote the following passages to a friend, explaining his early life:[5]

In the first few years after President Kennedy was murdered on Elm Street in Dallas, Cahill watched as the country became divided by the new president’s manipulations to put it on a warpath that made no sense to him, and millions of others who were also aghast at the horrors his policies portended.  By 1967-68, most people paying minimal attention to the growing numbers of American boys killed or wounded began realizing that they had been lied to by President Johnson, Defense Secretary Robert McNamara and the generals running the war, about how “successfully” his war was going.

As did so many others watching it unfold, America stumbled into a particularly senseless war and Tom Cahill’s name, as a disillusioned veteran who had begun participating in anti-war demonstrations, thus appeared in underground newspapers.  That caused his life to be abruptly turned upside down because he had unwittingly become caught up in a “perfect storm” of events colliding around him.