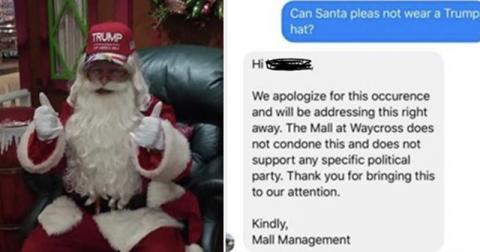 The Waycross Mall (GA) fired their token Santa Claus as Frank Skinner, age 50, was removed from duty after mall management discovered that he had the audacity to post a picture of himself wearing a Make America Great Again hat on HIS PERSONAL FACEBOOK PAGE!!!

If one understands that most malls and stadiums are FEMA camps in waiting, this should not be surprising.

Ladies and gentlement, the malls are not your friend. They are aligned with a Deep State mentality that will send dissidents to so-called re-education camps. Originally, when the concept of FEMA camps became known to the American people, the people were lied to and said that the increase in FEMA re-education camps was necessary in case of a mass influx of illegal immigrants. Well, since that time, we have had two massive waves of illegal immigration and no illegal alien went to a FEMA camp. However, as documented on the CSS, the homeless have begun to be relocated to FEMA camps and now there is talk of using ships to detain the homeless.

The case of the MAGA mall Santa gives me the excuse to expose the treasonous nature of American malls and our professional sports leagues as a whole. Of course this Santa cannot celebrate Trump, even on his own time. The Deep State took over the end game purpose of malls and sports leagues stadiums and arenas beginning in 2011-2012. IF the Democrats gain control of the White House, the House and the Senate, many of you reading these words could take up residence in one of these makeshift FEMA camps.

In September of 2011, Simon Properties, the largest owners of malls in North America inked a deal with DHS to allow their malls to be used as detention centers in times of “national emergency”. DHS has followed suit with their plans to use sports facilities as detention centers (i.e. FEMA camps). DHS and FEMA have even rehearsed for martial law detentions at various sports stadiums. The most well-known of these “rehearsed” events took place in Denver. On September 23, 2011, the Department of Homeland Security and FEMA conducted a disaster drill in Denver, Colorado that they called Operation Mountain Guardian. The plan was all-inclusive and basically shut down the Denver metropolitan area including Denver International Airport, many malls, many schools and several other public venues including Sports Authority Field where the Denver Broncos play professional football.

Why didn’t this event put people in the streets by the tens of thousands? To rub salt in the wound a similar drill was conducted at Giants Stadium in New York in the same year. As a part of the drill, several bus loads of school children were taken to Sports Authority Field along with their teachers. Surrogate parents were hired by FEMA to attempt to pick up their children at the stadium. The training was apparently a desensitization exercise for security personnel designed to refuse demands to pick up their children from these “pretend” parents. The real parents of these children were not properly notified that their children would be transported to the stadium and would be a part of this disaster drill. As a parent, I would have a major problem with the non-notification of the relocation of children. I find this ironic, because before a school child is allowed to go on a field trip, their parents and teachers are required to fill out a multiple list of permission forms that must be signed by parent or guardian of the child. This is a sign of things to come courtesy of FEMA and DHS. As if this is not bad enough, the NFL and DHS just announced their Super Bowl security measures. As far back as the 2012 Super Bowl, thousands of stadium vendors were taught how to spot “potential terrorist activities” during a mandated TSA training program. Fans were also subjected to full body pat downs, a policy ordered by the DHS in 2011. Every fan who attends the Super Bowl from now on will not only have their genitals touched, but will also have their food ex-rayed along with their bodies. Even a fan’s food will be X-rayed? This is insane! And keep in mind that both malls and stadiums now serve the dark side of the Deep State. Even recent mall construction reflects the new thinking and dual use purpose of a mall.