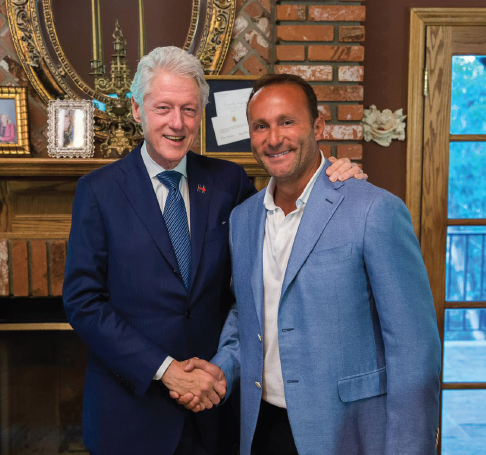 Welcome to the jungle of elites, criminals, and Pope Francis who all seem to have their eyes set on South Africa, while Russia and China run naval drills off the coast. It’s an interesting intersection of events and individuals. What’s more interesting is the timetable of recently indicted George Nader and Andy Khawaja, along with the Clintons and Pope Francis, that leads to the United Arab Emirates (UAE), who also have a big interest in South Africa.

With the recent African proverb spoken by Pope Francis, mixed in with cryptic messages of a “new humanism,” he is “reinventing” in a global pact, highlighted by Hillary Clinton’s similar African proverb used in her book “it takes a village,” one wonders what plans are underway in Africa? One also wonders what was really brokered when the Pope visited the UAE earlier this year, as the first ever pontiff to travel to the Arab peninsula. While Bill & Melinda Gates strutted the streets of Cape Town where Richard Branson’s business recently sprung branches, Meghan and Harry took a 10-day tour. Even twitter Jack is making a move to Africa to expand on twitter and other technology ventures.

The Indictment of George Nader, Ahmed (Andy) Khawaja, and Six Others for Illegally Funding Hillary Clinton’s 2016 Presidential Campaign from a Foreign Country

This indictment could prove to be the first indicted school of fish in a very large net. Essentially what we have is a foreign government meddling in our elections, a presidential candidate knowingly lapping up $4 million, and a pedophile serving as the middle man. Isn’t that something? Lebanese convicted pedophile George Nader, who goes way back with the Clintons and served as informal envoy to Syria for the Clinton administration, has acted as an advisor to the Middle East for decades. He was playing both sides, with the hope that Hillary Clinton would win.

Nader and CEO of Allied Wallets Ahmed (Andy) Khawaja worked together to provide private parties, in home dinner meetings, and fundraisers, in addition to meeting with the “big lady,” “big sister H,” and “big sister’s husband” in private, otherwise known as Bill and Hillary Clinton. Of course, to enter the world of Clinton pay-to-play, one must pay at the door, so $3.5 million was concealed and funneled through democratic political committees affiliated with Hillary’s 2016 campaign. All the while, George Nader was reporting back to UAE’s Sheikh Mohammed bin Zayed Al Nahyan (MBZ) on the progress. In order to try to slide these funds through under the radar, they enlisted staff from Allied Wallets, in addition to using Khawaja’s wife’s name. Khawaja donated hundreds of thousands to the DNC and other democratic committees, as well as to Adam Schiff, Joe Biden, Chris Coons, Dianne Feinstein and numerous others. They were so concerned that if “candidate 2” (Donald Trump) got elected “it would be over for the Arabs.”

Much to their surprise, he did in fact win, so they immediately donated $1 million to his inaugural fund. Months later, Mueller gave Nader partial immunity to go over details of meetings he orchestrated for team Trump for potential “Russian collusion,” which was later unfounded in his final report. Mueller didn’t seem too interested in Middle Eastern “collusion” and meddling in our elections, nor was he going to oust Hillary Clinton. In June 2019, George Nader was arrested on child pornography charges, which are still pending. Meanwhile, this top secret investigation was going on into illegal campaign funds to Hillary Clinton, without a single peep or a single leak, until the indictment was unsealed on December 3rd.

Does anyone believe that Hillary Clinton wasn’t aware of this money being funneled through George Nader to her from the UAE? The Clintons have an extensive background with the UAE. Just last year, on February 22, 2018 Bill Clinton met with Sheikh Mohamed Bin Zayed Al-Nahyan, the deputy supreme commander of the United Arab Emirates (UAE) Armed Forces to review “an array of issues of mutual concern.”

Bill Clinton has been a regular speaker at business and educational conferences in the UAE for years. In fact, between 2011 and 2014, he had been paid $5.625 million by Dubai’s GEMS Education to lead the charity arm, and in 2013, was paid $500,000 to give a speech at the World Travel and Tourism Council in Abu Dhabi. The foundation’s goal was to impact the lives of 10 million underprivileged children that needed better access to education. Nothing to be alarmed about there.

During Hillary Clinton’s time as Secretary of State, they banked millions, and brought entrepreneurs and investors into the UAE. The Saudi regime donated between $10 million and $25 million to the Clinton Foundation, while “the State of Qatar,” the UAE, and the government of Brunei donated between $1 million and $5 million. So is it a big surprise that they were illegally funding her 2016 presidential run?

When will they be questioning Hillary about these funds? After all, there are several people sitting in jail right now for accepting far less in campaign funds that didn’t even come from another country.

According to The New York Times, Khawaja had never made a political donation prior to this, and had met George Nader for the first time when they were both in the UAE in 2015. Coincidentally, Khawaja had a personal meeting with Hillary Clinton on November 5, 2015 in Los Angeles. To be a fly on the wall would be understatement, but it goes without saying, that the Clintons, Nader and Khawaja all had high level connections in the UAE. Perhaps this was the meeting to discuss how the funds would be funneled and what pay-to-play actions would come from it? The money was funneled between May and October of 2016, six months after that meeting took place. According to The New York Times, Khawaja shifted his funding to the Republican party after Hillary lost, and he and his wife donated a combined $250,000 to the Republican National Committee in 2017.

As disturbing as this all is, no one seems to be looking at Allied Wallets and CEO Andy Khawaja’s connections. Allied Wallets is an online payment processing service that operates out of 164 countries, is headquartered in Los Angeles, was founded in 2005, and has amassed $16 billion. They were expected to double in size by 2025, though this indictment may have put a damper on that. When Khawaja began his venture, he was allegedly turned away by 350 banks before an executive from Deutsche Bank agreed to grant him his first seed loan. That sounds a bit outlandish, except for the part about Deutsche bank.

Like any other money laundering front for the elite, Khawaja rose to stardom quicker than he could create his next shell company. Every mainstream news outlet was plastering him on their covers. He was cozy with world leaders, presidents, and even received praise and recognition from the Pope. He was educated (or trained) in speaking five languages, including Arabic, French, and German, so building relationships came easier. His elite friends called him “Doctor,” and in 2016 he was awarded an “honorary doctorate degree” in Humanitarian Studies by the Lebanese American University in 2016 to give him an official title. Two years later in 2018, Senate Minority Leader Charles E. Schumer (D-NY) appointed Khawaja to the U.S. Commission on International Religious Freedom for a term through May 2020, but that has obviously been cut short. That was a big year for Khawaja, as he also received recognition and an ambassador of peace award from the Pope.

But Not Everything was Sunshine and Roses

He has settled twice with the Federal Trade Commission (FTC) over charges of laundering money for illegal websites. He forfeited $13 million in 2009, and just this May, Khawaja and two of his officers settled with the FTC for knowingly processing fraudulent transactions for firms that were known by law enforcement agencies as fraudulent. It wasn’t just about “knowing,” they actually created fake foreign shell companies, dummy websites, and other false information so as to hide it from banks and credit card networks. This was a full blown, very carefully constructed scheme. Imagine what they must do for the elite, politicians, and world leaders to make the world go round, while moving money across 164 countries? Allied Wallet received a judgment of $110 million, and Khawaja had to turn over a residence in Los Angeles, and the rest of the judgement was suspended due to inability to pay. Election meddling by funneling funds to Hillary from a foreign country may top the list of crimes that have been exposed, but what about nearly 15 years of potential crimes that have yet to be exposed?

What happens when two Lebanese men who work with world leaders in the UAE, the Clintons who have relished in millions from the UAE, and Pope Francis all get together to dance? The Pope travels to the UAE to visit with their leaders, making it the first time in history that a pontiff has ever visited the Arabian peninsula. More details on this in the timeline below.

One thing is very important for people to grasp. The middle man, George Nader, has a history that resembles that of the devil. What was found on Nader’s phone when he was arrested in June 2019 for charges of child pornography, included images of young boys engaging in sexual acts and bestiality. In 1991, Nader was convicted and sentenced to six months at a halfway house in Maryland, on a felony charge for transporting sexually explicit videos of underage boys in foreign commerce. But the one no media outlets seem to want to include in their reporting, is the one-year prison term in 2003 where he was convicted in Prague for corruption of minors, sexual abuse and impairing minors. He sexually abused 10 young boys. THIS is the man that they have all developed a decades-long relationship with.

Hillary and Bill’s business relationships and friendships to pedophiles can no longer be overlooked. In April, 2019 Corey’s Digs published a very detailed report showing all of these relationships with those arrested and/or convicted of sexual crimes against children, including George Nader, NXIVM, Jeffrey Epstein, and many others.

In Addition to The UAE, What Are They Up To in South Africa?

Follow the individuals, connections to one another, timeline, and their interests in South Africa. We know that Bill and Hillary have been exploiting Africa for decades, going all the way back to their installment of Nelson Mandela as President in 1994, which coincidentally is when UAE formed diplomatic relations with South Africa. We also know that Bill and Melinda Gates, George W. Bush, Barack Obama, Dr. Paul Farmer, Jim Yong Kim, numerous organizations and several celebrities, have all played their roles in exploiting Africa. But something bigger is on the horizon, with a focus in South Africa specifically. The fact that all of these individuals intertwine is very telling. The UAE timeline is also very telling.