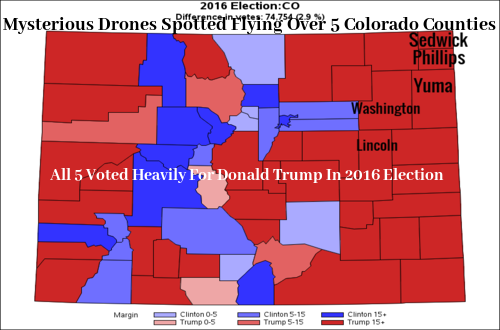 – Are 2nd Amendment Sanctuaries Being Spied Upon By Globalists Preparing Massive ‘Event’?

While authorities in 5 different Colorado counties are calling the sightings of mysterious drones, some with 6-foot-wingspans, flying grid patterns over large swath’s of land at night ‘weird and concerning’ according to this December 27th story at the Denver Post, we find it concerning that each of those counties voted heavily for President Donald Trump in the 2016 election as seen in the map above, with 4 of the 5 counties also 2nd Amendment sanctuary counties in Colorado, while 3 of them had voted to secede from the state as recently as back in 2013 as we’ll explore more in the next section of this story below.

Although initially, authorities and residents of the Colorado county’s Phillips and Yuma had reported the drone sightings, as the Post reports, now authorities in neighboring Lincoln, Washington and Sedgewick have also encountered, and are stumped by, these mysterious clusters of un-manned aircraft, numbering between 6 and 30 drones according to this December 27th story over at 9 News in Colorado.

And though the US Air Force and the FAA have both confirmed that they don’t have any drones flying grid patterns over those parts of Colorado, the Sheriff’s office in Phillips County, Colorado advises residents NOT to shoot those drones down, because doing so could carry a prison sentence of up to 20 years as drones are considered ‘protected aircraft’ under US Federal law, and hinting these drones are being used for ‘official’ purposes.

Yet while authorities have no idea what these clusters of drone sightings are, numerous ‘conspiracy theories‘ into them have emerged, including that they are the property of a Mexican drug cartel or ‘aliens from a far-off galaxy’. Yet much more likely, especially with everything else now going on in America and the fact that these drones are being spotted over ‘Trump country’ in Colorado, are the theories we’ll explore in the next section of this story below. 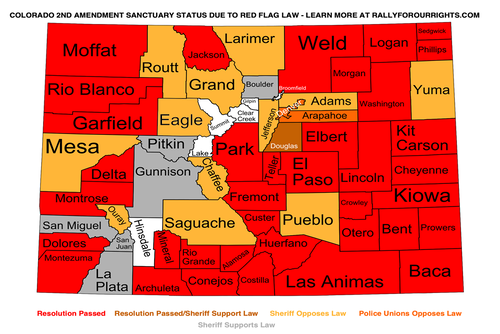 With Sedgewick, Phillips, Lincoln and Washington counties in Colorado all being 2nd Amendment sanctuary counties as seen in the map above, we also find it very interesting that as recently as 2013, residents of 4 of those 5 counties had floated proposals to secede from Colorado completely to form the state of ‘North Colorado’ as was reported in this wikipedia entry.

And with the counties of Yuma, Phillips and Washington all voting to secede from the state as recently as 2013 along with 2 other counties while 6 other Colorado counties rejected the proposal, it’s easy to see why Democrat government might want to have them under surveillance with the sanctuary counties the response to controversial red flag laws that Democrats are trying to unveil there, similar to what we’re hearing about now in Virginia.

As had recently been pointed out in this new SQAlert from Steve Quayle’s website, these counties are also some of the eastern-most counties just outside of Denver and the Denver International Airport, long rumored to be the future home of the luciferian ‘new world order’. And while we’re unable to confirm that the globalists are preparing a massive false flag event such as the nuking of Washington DC or something else absolutely horrific that would require the moving of the US capitol to Denver, it’s long been warned that before the luciferians allow themselves to be ‘taken down’ by ‘the law’, they’ll ‘take down’ America first.

As we had reported on ANP back on December 10th in this story titled “With the globalists needing an ‘end game false flag event’ to finalize their coup over America & fully cement tyranny into place, prepare to defend your families and loved ones”, a story which Tyranny News had republished here, if Democrats can’t ‘control’ society, they’ll instead destroy it.

Perfectly illustrated in their ‘bloodlust, media-hyped hatred’ of anything Christian, Conservative, pro-America or pro-President Trump that has led to innocent people, often the elderly, being brutally attacked in the streets for simply wearing a MAGA hat or t-shirt, we’ve long been warned of a future ‘end game event’ that Democrats/globalists would ‘manufacture’ then ‘use’ to ‘cement’ tyranny into place.

And while that ‘event’ hasn’t yet arrived in America, possibly bringing with it an unfolding of tyranny of the worst nature, a tyranny sure to be heavily ‘resisted’ by tens of millions of well-armed Americans, we may have recently gotten a small hint of what that ‘event’ might be with globalists/leftists happy to use ‘false flag terrorism’ to accomplish their goals, with false flags getting nations into global wars dating back decades.

Operation Northwoods was a proposed false flag operation against the Cuban government that originated within the U.S. Department of Defense (DoD) and the Joint Chiefs of Staff (JCS) of the United States government in 1962.

The proposals called for the Central Intelligence Agency (CIA) or other U.S. government operatives to commit acts of terrorism against American civilians and military targets, blaming them on the Cuban government, and using it to justify a war against Cuba.

The possibilities detailed in the document included the possible assassination of Cuban émigrés, sinking boats of Cuban refugees on the high seas, hijacking planes, blowing up a U.S. ship, and orchestrating violent terrorism in U.S. cities. The proposals were rejected by President John F. Kennedy.

With this December 22nd story by JD Heyes over at Civil War News reporting the globalists may be preparing to attempt to ban the 1st Amendment in America as well by banning the ‘reporting upon’ the growing 2nd Amendment Sanctuary movement in Virginia, it’s long been warned that a widespread attempt to take down the independent media would be a sign to watch out for that indicates the globalists full-scale implementation of tyranny in America.