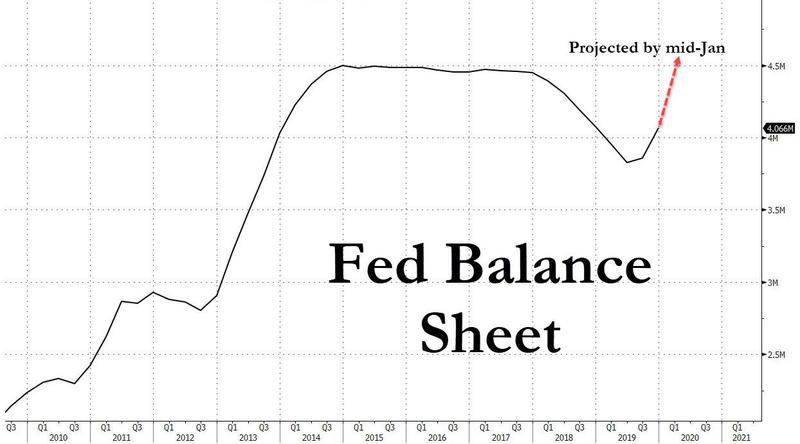 Well, moments ago the NY Fed did publish it latest weekly “Statement Regarding Repurchase Operations” as expected laying out the Fed’s expected repo operations for the period December 13 – January 14… and it blew Skyrm’s expectations out of the water

According to the statement, the NY Fed will continue to offer two-week term repo operations twice per week, four of which span year end. In addition, the Desk will also offer another longer-maturity term repo operation that spans year end. The amount offered in this operation will be at least $50 billion, just as Skyrm expected.

But there was more. Much more.

In addition, to prevent a cascading year-end liquidity squeeze, Fed overnight repo operations will continue to be held each day, and just to be safe, the Fed will go to town by substantially expanding their size: On December 31, 2019 and January 2, 2020, the overnight repo offering will increase to at least $150 billion to cover the “turn” in a flood of overnight liquidity.  In addition, on December 30, 2019, the Desk will offer a $75 billion repo that settles on December 31, 2019 and matures on January 2, 2020.

And just in case that’s not enough, the NY Fed’s markets desk also added that it “intends to adjust the timing and amounts of repo operations as needed to mitigate the risk of money market pressures that could adversely affect policy implementation, consistent with the directive from the FOMC.”

What the Fed means is that in addition to expanding the sizes of its “turn” overnight repos to $150 billion, the Fed will conduct a total of nine term repos covering the year-end turn from Dec 16 to Jan 14, 8 of which will amount to $35BN and the first will be $50BN, for a total injection of a whopping $365 billion in the coming month.

In other words, instead of QE4 the Fed will flood the repo market with a firehose of liquidity.

Here is how Curvature’s Skyrm summarized this:

One word: “Massive“. A few more words: The largest series of RP operations ever! The Fed announced it’s RP operations schedule for the next few weeks and it’s huge!

Here are my calculations: