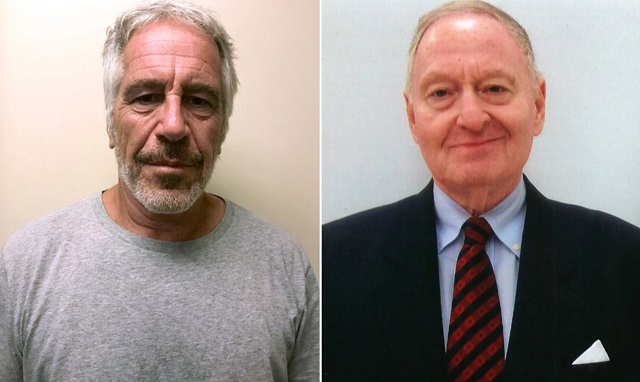 Jeffrey Epstein “admitted” he was “a top-level agent for the Israeli Mossad” to his fellow now-disgraced business partner Steven Hoffenberg, Dylan Howard reports.

EPSTEIN ‘ADMITTED TO ME’ HE WAS A SPY: Ex-Business Partner Of Sex Criminal Claims Prince Andrew Is Protecting Ghislaine Maxwell, Stonewalling Prosecutors’ Investigation Over Blackmail Fears

Steven Hoffenberg was arrested by FBI agents in Arkansas in 1996, after regulators accused him of defrauding investors. The former business partner of Jeffrey Epstein in Towers Financial spent 18 years in jail for the largest Ponzi schemes in history prior to Bernie Madoff’s crimes. But the notorious sex criminal got away scot-free. Why? In a series of new and exclusives conversations, Hoffenberg reveals the real reason he evaded justice in one of America’s largest Ponzi schemes—he was an international spy.

That’s the explosive claim of former Epstein colleague and friend, Steven Hoffenberg, who confirms that Epstein was indeed a top-level agent for the Israeli Mossad, as first confirmed in the best-selling book Epstein: Dead Men Tell No Tales.

In a series of bombshell interviews with me following the release of the book, Hoffenberg confirmed that not only does he have first-hand knowledge of Epstein’s work as an agent of the Mossad, as described in the book; but also, his former cohorts Prince Andrew and Maxwell are still actively working to keep his explosive secrets.

Hoffenberg famously worked as Epstein’s business partner at the ill-fated Towers Financial Group in the 1990s. In 1993, the business collapsed as a multi-billion-dollar Ponzi scheme was exposed. Hoffenberg pleaded guilty and went to prison in 1995, but Epstein got off scot-free.

Steven Hoffenberg is the former chairman of Towers Financial Corporation, a debt collection agency, that he used in a Ponzi scheme. He was the owner of the New York Post. The firm collapsed in 1993, and in 1995 Hoffenberg pleaded guilty to bilking investors out of $475 million. The SEC considered his financial crimes as “one of the largest Ponzi schemes in history” prior to Bernie Madoff’s crimes a decade later. According to Hoffenberg, it was his espionage connections that helped him skate. During his work with Epstein, Hoffenberg says, he had a front-row seat to the espionage work that brought Epstein into close contact with foreign agents from Saudi Arabia, Israel, Russia and more.

Read Hoffenberg’s full statement. Hoffenberg claims was afraid to mention the espionage angle because he felt “the espionage connections were too hot, and that concerned me for risk — up until your book.”

I don’t know whether Hoffenberg is actually telling the truth but the evidence we already have unquestionably points to Epstein having been an agent of the Mossad (despite Alan Dershowitz’s claims to the contrary).

Hoffenberg, who is said to be around 72 years old now, claims he became a Christian while in prison.

He was also part of a now-withdrawn lawsuit filed in 2018 by former Tower investors which alleged that Epstein was an “uncharged co-conspirator” in his Ponzi scheme.

The lawsuit also alleged “that the millions in stolen investment was the seed capital for Epstein’s hedge fund, which it values at $50 billion,” QZ.com reported.

Ed Opperman interviewed Hoffenberg on the case on Friday:

Epstein went to work for pro-Israel billionaire Les Wexner after Hoffenberg was taken down.

As to Epstein being handled with kid gloves by our government, The Daily Mail reported earlier this year that Epstein worked as an FBI informant to secure his sweetheart plea deal when he was facing life in prison back in 2007. The probe was closed out in 2008. The FBI, which at the time was under director Robert Mueller, allegedly let Epstein off the hook in part because he turned over some info on two Bear Sterns execs — who were later both acquitted!

The big screw-up: incendiary warnings by Maxine Waters over the trial of Derek Chauvin could badly backfire