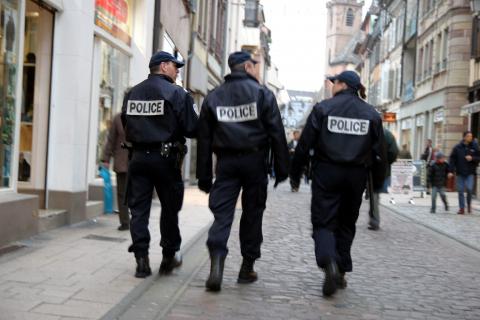 Since around 2011 the French Republic began suffering a self-inflicted cultural and social wound when the government began accepting millions of migrants and refugees from the Middle East.

Today, France has the highest Muslim population in all of Europe (5.7 million), one of the biggest problems with terrorism, and cultural decay from within because Muslims and Western Christians just don’t mesh well.

As reported by Zero Hedge:

France is bracing for major transportation disruptions throughout the country starting Thursday, as trade unions launch a strike in response to changes President Emmanuel Macron wants to make to the country’s retirement system, while port blockades have resulted in widespread fuel shortages across the country.

The site goes on to report that the disruptions and shortages will also hit the metro Paris area, which will essentially be shut down, including many national and international train lines including key Eurostar services.

In addition, many flights will have to be canceled as there will be shortages of air traffic controllers who say they plan to go to protests through to the weekend at least.

Already, hundreds of fueling stations have run out of gasoline and diesel fuel due to blockages of refineries that are now entering their second week, according to industry group UFIP.

Sponsored solution from the Health Ranger Store: The Big Berkey water filter removes almost 100% of all contaminants using only the power of gravity (no electricity needed, works completely off-grid). Widely consider the ultimate “survival” water filter, the Big Berkey is made of stainless steel and has been laboratory verified for high-efficiency removal of heavy metals by CWC Labs, with tests personally conducted by Mike Adams. Explore more here.

According to The Local, a news publication, construction workers have blocked refineries in Brittany since last week, while a blockade at La Rochelle has begun anew.

Various French media reported Tuesday morning that 390 gas stations in all have no fuel while an additional 389 had only limited supplies. Areas affected include Brittany, the west of France, some parts of eastern France near the Swiss border, and the southeast coastal area around Marseille.

‘Tired of not feeling defended and heard?’

Blockaders are protesting a fuel tax hike which is slated to take effect next year, and not just by a little. Construction workers claim that the tax will increase the cost of fuel prices by 45 percent, which adds an hourly cost of about €10 for an average mechanical excavator. Workers fear that smaller construction companies will be affected the most, which could drive many out of business and increase unemployment in the industry.

A year ago the French government suspended the fuel tax in the face of “yellow jacket” protests that were disruptive throughout the country. Macron tried to implement the tax as part of the Paris Climate Accords, but that didn’t go over so well with the French people.

In a separate fight regarding a different fuel tax, truckers from the group Organisation des Transporteurs Routiers Européens also plan to stage protests that will include rolling road blocks across France. These are slated to begin December 7 and will continue until the issues are resolved.

French truckers are angry over a two-cent increase in the diesel tax, Zero Hedge reported.

“Tired of not feeling defended and heard, road transport companies will express in the street the legitimate anger of the profession,” the group said in a press release. The protests will run “from December 7th and the following days.”

Adding to the potential chaos is the fact that yellow jacket protesters may also join in the fray, along with teachers unions, postal workers, hospital employees and even French police.

“It’s the coalition of all frustrations, and it demonstrates the isolation of the elite, the isolation of the president, even the personal rejection of Macron,” noted Dominique Moïsi, a French political scientist and the author of a recent book on emotions in politics.