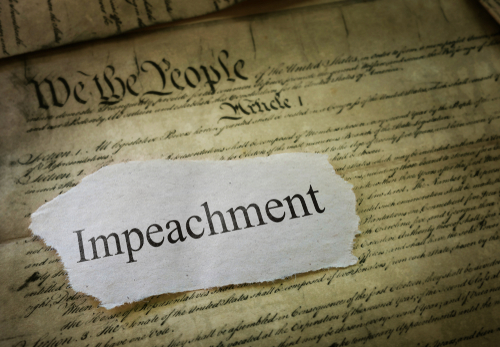 The entire impeachment process is bringing into focus serious constitutional questions. First, Congress must actually send the impeachment documents to the Senate. This cannot be done simply on a phone call or by telling the press. Pelosi has now delayed sending the articles of Impeachment for the Democrats are playing games. All along they claimed that Trump’s actions placed the nation in a situation of immediate danger. Adam Schiff has the audacity to say: “We’ve got to move this along because Donald Trump is a clear and present danger.” He added: “‘We can’t wait for him conceivably to do something.”

Now the Democrats are delaying trying to interfere in the Senate and they are clearly trying to stage a coup against Trump on grounds that are not a basis for impeachment. The clear and present danger is this partisan rigging of the rules to overthrow the president of the United States. Never has anything ever risen to such a level. Even if they succeeded to take the Senate and the White House and impose effectively Martial law to install a Marxist form of government, the retaliation from the Republican would reach the same level of chaos. The only way to prevent that would be to suspend the Constitution claiming an immediate threat to the nation.

Such a scheme has taken place throughout history and that would indeed lead to civil war. So I fail to see why the Democrats are acting so outrageously. Nixon was impeached by a bipartisan vote. This is down party lines. This is so hateful and divisive to the country, the Democrats seem to have lost all reason.

We have such a disparity in legal standards here it is unbelievable. The Democrats refuse to abide by the same rules that governed Clinton’s impeachment trial in the Senate. They are trying to prevent Trump from calling witnesses in his defense. You would think this was some third-world dictatorship. On top of that, they are seriously trying to recuse Mitch McConnell claiming he is biased when Pelosi instructed all Democrats to vote the party line regardless of their beliefs.

Then there is the fact that Joe Biden publicly admitted that he personally withheld $1 billion in a loan grant from Ukraine unless they fired the prosecutor who was investigating the company that hired his son. Under the standards they are applying to Trump, Biden should be impeached and prevented from running for office ever again.

The Inspector General’s report has confirmed that the Obama Administration was investigating, wiretapping, and even had uncover-agents inside Trump’s campaign. That reaches Watergate levels of interfering with an election. The Inspector General report stated:

“We also identified several individuals who had either a connection to candidate Trump or a role in the Trump campaign, and were also FBI CHSs, but who were not tasked as part of the Crossfire Hurricane investigation.”

That was a clear reference to the notorious Carter Page, who was an adviser whom the FBI wiretapped for a year in addition to former campaign manager Paul Manafort. The audacity of this mess shows there is clearly a denial of Equal Protection of the Law.

SMOKING GUN: The mRNA Vaccines Are USELESS and DANGEROUS!