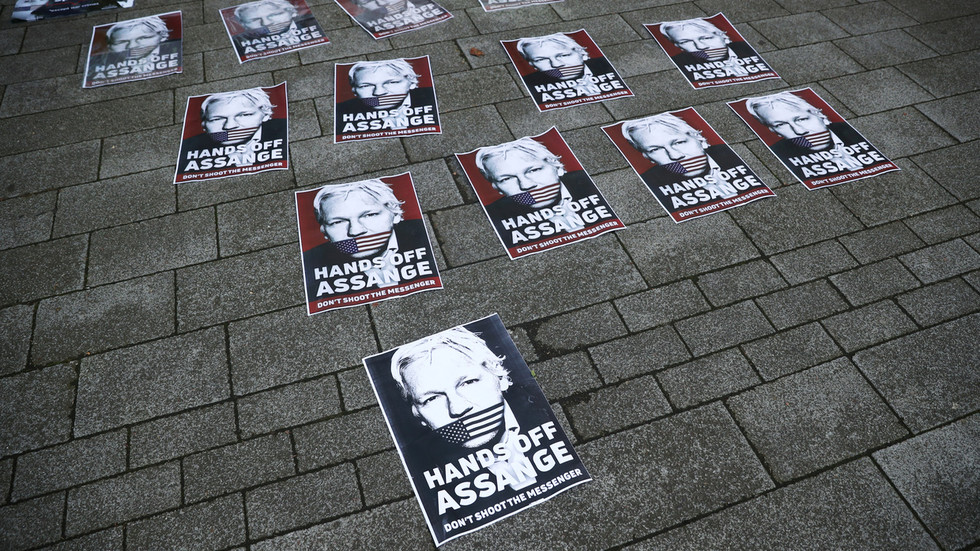 Julian Assange sounded like a shell of the man he once was during a Christmas Eve phone call, British journalist Vaughan Smith told RT, noting the WikiLeaks founder had trouble speaking and appeared to be drugged.

Assange was allowed to make just a single call from the maximum security Belmarsh prison in southeast London for the Christmas holiday, hoping for a reminder of the world beyond his drab confines of steel and concrete.

“I think he simply wanted a few minutes of escape” and to revive “happy memories,” Smith told RT, adding that Assange had spent the holiday at his home in 2010. The brief conversation was far from cheerful, however, with Assange’s deteriorating condition increasingly apparent throughout the call.

He said to me that: ‘I’m slowly dying here.’

“His speech was slurred. He was speaking slowly,” the journalist continued. “Now, Julian is highly articulate, a very clear person when he speaks. And he sounded awful… it was very upsetting to hear him”

Though Assange didn’t say it out loud during the call, Smith said he believes the anti-secrecy activist is being sedated, noting that “It seemed pretty obvious that he was,” and said others who visited Assange were of the same opinion.

Smith isn’t the first to raise this issue, but British authorities have so far refused to divulge whether Assange has been given psychotropic drugs in prison, insisting only that they aren’t “mistreating” him. But given that he is “being kept in solitary confinement for 23 hours a day,” with requests by numerous doctors to examine his physical condition denied, Smith said he has a hard time taking the officials at their word.

“Julian was extremely good company over Christmas in 2010,” the journalist said, but the man he talked to on the phone last week sounded like a different person. “I just don’t understand… why he’s in Belmarsh Prison in the first place. He’s a remand prisoner. He’s not a danger to the public.”

Belmarsh is a Category A prison – the highest level in the UK penal system – intended for “highly dangerous” convicts and those likely to attempt escape, typically befitting murderers and terrorists. While Assange meets none of those criteria and was initially locked up for a minor offense of skipping bail, he was nonetheless thrown in Belmarsh and punished as if he were a violent, hardened criminal. He now awaits proceedings for extradition to the US.

The explanation may be as simple as taking revenge against somebody who dared to speak truth to power, Smith believes, and to make an example for anyone who might follow Assange’s lead in fighting state and corporate secrecy.

“What is clear that what is happening to Julian is much more about vengeance and setting an example to dissuade other people from holding American power to account in this way,” he said.

[Assange] delivered a discussion, a debate about what transparency should look like in the digital age… The debate got quashed it never really happened, instead he’s being victimized… That’s’ why he’s in Belmarsh.

Going forward, Smith said it will be important to continue pressuring the British government to answer a litany of questions about Assange, his treatment in prison and his health, as well as to push for an “independent assessment” of the situation. Confined in one form or another since taking refuge in the Ecuadorian Embassy in 2012 and now denied the ability to defend himself in court, Assange should finally receive a fair hearing.