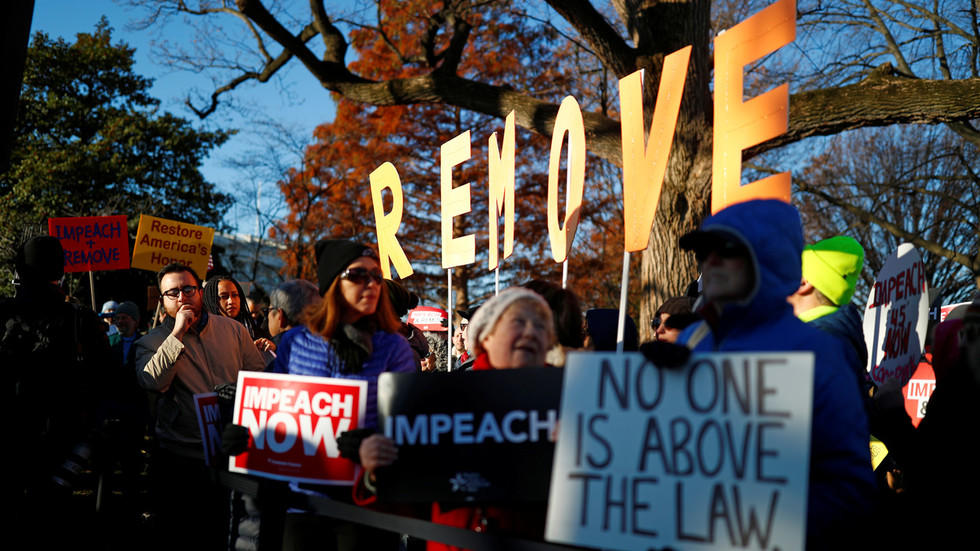 The US House of Representatives has voted to impeach President Donald Trump for “abuse of power” and “obstruction of Congress.” The Republican-majority Senate will now take up the president’s trial.

The outcome of Wednesday’s vote came as little surprise, with the Democrat-controlled House voting along party lines in what their GOP opponents perceive as a partisan attack on a sitting US leader.

Trump thus becomes the third-ever US president to be impeached by the House, after Andrew Johnson in 1868 and Bill Clinton in 1998. Both were acquitted in the Senate, and remained in office till the end of their terms. This is shaping up to be the scenario for Trump as well, as the Senate is under Republican control. Majority Leader Mitch McConnell (R-Kentucky) has already said that he intends to simply hold a vote to dismiss the charges, rather than dignify them with a debate.

Ahead of the vote, Trump tweeted a quote from Mark Meadows (R-NC), who said that “this is all about convicting a president based on innuendo, not on the facts. Even the Ukrainian president said there was no pressure!” He then proceeded to fly to Michigan, where he addressed a campaign rally as the vote in the House got underway.

On Tuesday, the president sent a scorching six-page letter to House Speaker Nancy Pelosi, saying the vote was “invalid,” and that the Democrats were “violating your oaths of office,”“breaking your allegiance to the Constitution,” and “declaring open war on American democracy.”

The “abuse of power” charges revolve around claims that Trump had withheld US military aid from Ukraine in an effort to pressure its newly elected President Volodymyr Zelensky into opening an investigation into Burisma, a gas company that had employed Hunter Biden on its board. Hunter’s father, former Vice President Joe Biden, is running for the Democratic Party presidential nomination in 2020, and therefore the investigation would amount to foreign interference in the election, the Democrats said, adding that it all somehow circled back to the ‘Russiagate’ conspiracy.