This is my last report from the good old “twenty-teens”.

In some respects, they didn’t turn out at all like I thought they would. But in many others, exactly as predicted.

I badly underestimated the system’s ability to perpetuate obvious frauds and swindles without causing a social rebellion. And worse, to watch so many otherwise intelligent people participate with glee.

Back in 2008 when The Crash Course first came out, you would have never convinced me that we’d be sitting here at the cusp of 2020 with $11 trillion of “negative yielding debt.”

I have to place that phrase in quotation marks, because, although I can write those words, I haven’t a clue what they actually mean in a world where money is supposed to be a store of value.  How can money in the future be worth less than money today?

Perhaps Pablo Escobar could help us here, as he reputedly factored in a 10% loss on all his buried cash due to rats, water damage, mold, or forgetting where he placed it.

Thee twenty-teens saw the extinguishment of bond vigilantes  leaving nobody to seriously push back on the abomination of negative rates. Only speculators are left these days, perfectly happy to place the bet that they’ll be able to sell their negative yielding bonds to a greater fool at a higher price.

There’s no such thing as a bond vigilante anymore, only speculators perfectly happy to pull on a slot machine lever in the hopes of selling their negative yielding bonds to some other punter later on at a higher price.

Paying any government to lend it money is a swindle.  Buying Greek national debt with a lower rate of return than US Treasury debt is a swindle.

These and a thousand others completely obvious swindles, and yet here we are with the vast machinery of state and corporate journalism aligned to tell you how good and right they all are.

I also underestimated the longevity of the recent shale oil “boom”.

I studied it intently early on, concluded it was a money-losing enterprise, and then patiently waited for investors to wake up to that reality.

This realization has been slow to dawn on them, but it’s finally becoming understood. Slowly, grudgingly. However, that’s after 10 years of massive losses for hapless investors in the shale oil space.

Shale company bond and equity holders have been slaughtered, though those vast losses are yet to be recognized.

While the capital raised from bond sales and equity offerings has already been spent, so are the wells that were drilled with that money. They’re played out.

Raising new capital merely obscures that any money that has not already been returned to investors can’t be and won’t be because of this dynamic: 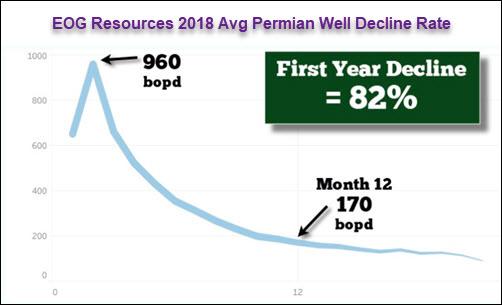 Which means that if that well has not entirely paid itself back within that first year, it probably won’t generate *any* returns for bond or shareholders to enjoy. Ever.

It also means that all the debt and equity capital poured into the ground between 2008-2017 is now “invested” in wells that are, effectively, depleted.

Bluntly, if the returns have not already happened on those monies, they probably never will.  How could they?  The wells are mostly drained.

The table below shows the equity losses for a small sampling of afflicted companies. Hundreds of other shale companies have already gone completely bankrupt with similar staggering bond losses to “investors”:

It still doesn’t make sense to me that the obvious cash-destroying financial math of shale oil has proven so difficult to explain that an entire decade has passed before the media and Wall Street have started to catch on.  It’s truly a mystery.  Usually people with money are more alert than this.  I chalk it up to the insanity stoked by the Fed in their “yield starved” captive audiences.

New Barnum – Investors are the best suckers there are.

More amazingly, there has been such a rush to rip the shale oil out of the ground that horrifying amounts of associated natural gas has been (and continues to be) simply burned off into the night sky. All that lost fossil energy will never be used constructively to build anything useful to our future.

It’s like a beacon into the universe telegraphing how moronically wasteful we’re being with a precious resource.  A multi-county sized neon advertisement for wastefulness.

Producers in the Permian are already flaring record levels of natural gas. The Texas Railroad Commission, which oversees the oil and gas industry in the state, has granted nearly 6,000 permits allowing explorers to flare or vent natural gas this year [2019]. That’s more than 40 times as many permits granted at the start of the supply boom a decade ago.

That was 6,000 opportunities to not be moronic. And we passed on every single one. 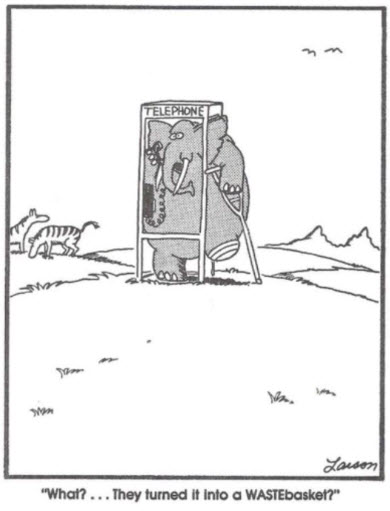 There will come a time in the not-too-distant future when people will look back, shake their heads, and pass harsh judgment on the generations involved with wasting so much precious energy.

In Dr. Seuss’ book The Lorax, the hero warns of the self-destructive impacts of industrial and consumer exploitation of the natural world and its denizens.

The book ends with a final warning; Unless. 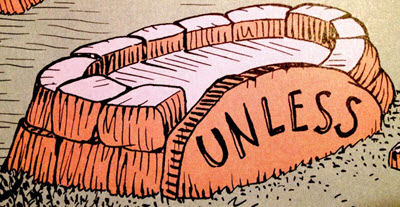 “Unless” our destructive practices are halted and reversed, much of the natural world will disappear forever, never to return. Gone is gone, man.

The distressing trends in the environment warned of in The Lorax and in The Crash Course have sadly only become gotten predictably worse over this past decade. I hate being right about those.

Meanwhile, I see a lot of people fretting about if/how various carbon emission targets are going to be met. Let me alleviate the suspense; they’re not.

Every single economically-retrievable lump of coal and molecule of oil and gas is going to be extracted and burnt before we give up our addiction to fossil fuel.