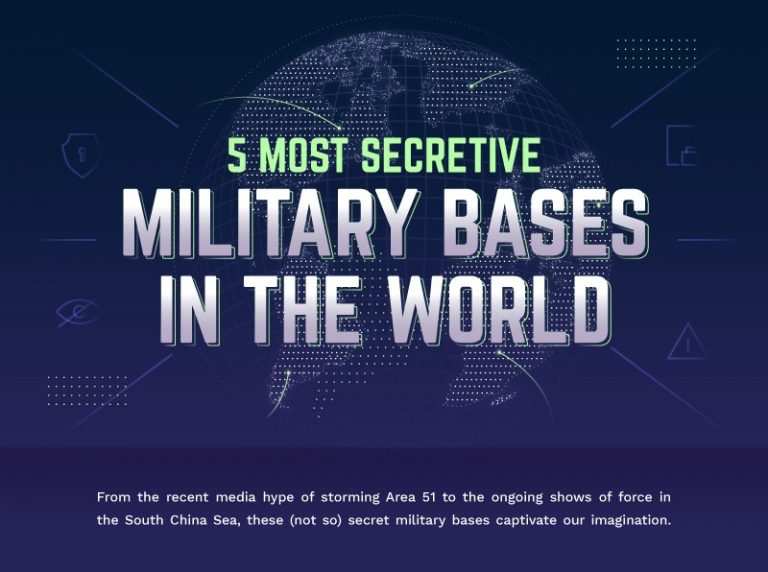 Editor: The bulk of this article originally appeared at Reservations.com They reached out to me yesterday and wanted me to run their infographic (featured at end of article). In the interest of time I am using their wonderful research and adding some videos and commentary to it. I wanted to get this info out immediately. Original text from Reservations.com article are in italics. My additions are in normal print. -Dean Garrison, Publisher and Editor

In a time when we are overloaded with information, it’s important to distinguish fact from fiction. We are here to verify some real-life military bases around the world. These bases have been shrouded in mystery and protected from the public eye for decades. At the same time, their locations and existence have been covered by the media for years or decades, so no top-secret military secrets are shared here, sorry! We’re simply here to separate the fact from the fiction for you, and perhaps stoke your imagination just a little bit. 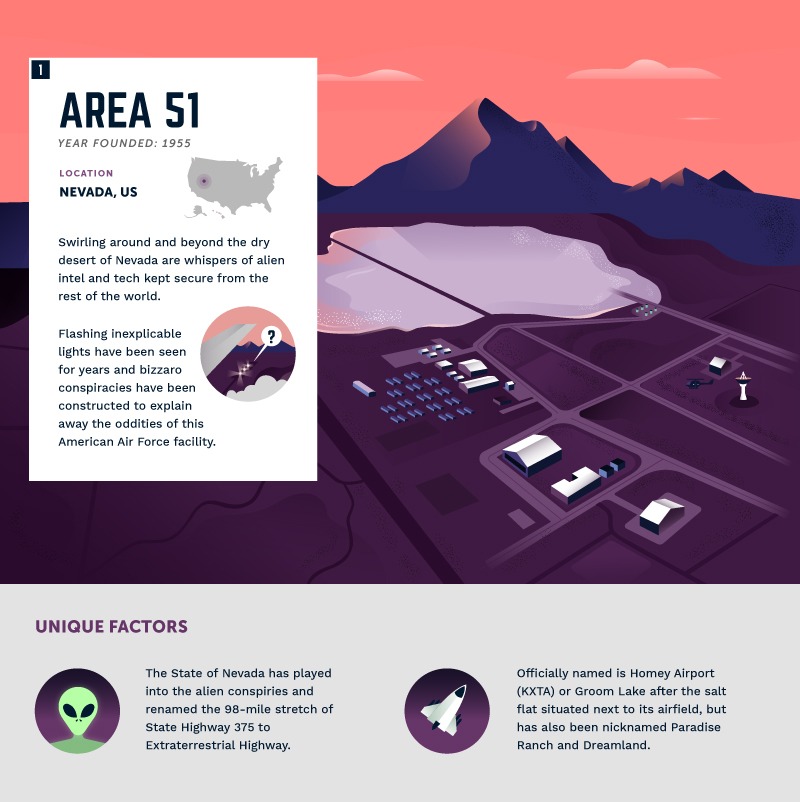 Alien hunters and bored college kids set in motion a plan to storm Nevada’s Area 51 in September 2019. Initially inspired by an innocuous Facebook event, the page attracted over a million potential attendees. As a result, the internet and journalists took immediate notice, on the other hand, so did the US military.

Area 51 is an active military base. For years it has maintained a measure of mystery caused by bizarre lights twinkling strangely in the surrounding skies. As of 2013, the US government has (finally) officially admitted its existence. Therefore, we now know it is a US Air Force training range. That could explain why years ago these rumors caught hold.

This site is potentially where some of the most advanced air technology has developed for our Air Force and military. As a matter of fact, at its origin in the 50s, planes were secretly flying or testing at night. At the time, flying objects seen at these heights and speeds were foreign and unbelievable. Those bizarre and inexplicable lights didn’t make any sense to those living around the area. Hence, they were deemed: Unidentified Flying Objects.

For years rumors of UFOs and alien testing in this uncharted and vast region dominated. For the most part, the secrets and mystery and fascination remain. In light of history, it’s no real surprise that the internet following to go “see them aliens” was so strong.

Here’s a video from Inside Edition:

Fox News has this:

“Here are some of the top conspiracy theories associated with Area 51.

An extraterrestrial ship crashed in Roswell and was transported there

The 1947 crash of a disc-shaped aircraft in Roswell kicked off UFO speculation worldwide. There have been a number of rumors about the disc, which is described as a Russian spy plane in the new book “AREA 51: An Uncensored History.”

A 1945 report on airplanes designed by Germany’s Horten brothers included this photograph of an unusually shaped parabolic aircraft. Two years later, after the crash of a foreign disc-shaped aircraft in New Mexico, in July 1947, the Counter Intelligence Corps embarked on a manhunt across Western Europe to locate the Horten brothers and their so-called flying disc.

Bob Lazar, a purported whistleblower and controversial figure in the scientific community, claims to have worked for a period of time at a secret military base at S-4, which he said is several miles south of Area 51.

According to Lazar’s claims, he saw flying saucers that were powered by Element 115, years before it was discovered by man. Lazar claims he is still being tracked and monitored by the U.S. government, 30 years after he exposed Area 51 to the world, according to media reports.

Extraterrestrials are kept hostage there

In conjunction with the alien spacecraft that conspiracy theorists believe are at Area 51, extraterrestrials are also believed to be located there, including ones that are supposedly held hostage.

In the 2018 Netflix documentary, Lazar said that he was walking down a hallway at S-4 and for an instant, saw a small, gray extraterrestrial between two men in lab coats through a small window.

Lazard claimed that he was told by a guard to stop looking and move along.

Alien autopsies have been performed there

Conspiracy theorists also believe that following the supposed extraterrestrial spacecraft that crashed in Roswell, N.M. in 1947, the dead bodies of the aliens aboard were taken to Area 51 and dissected.

In the mid-1990s, a fuzzy black-and-white film supposedly showed a team of scientists and doctors cutting open one of the beings was aired on TV. Eventually, this footage was proven to being a hoax after the producers came out and said they had faked the autopsy.

Area 51 is home to the government’s mysterious black helicopters

The government has tested secret aircraft at Area 51, including the Cold War spy plane, the SR-71 Blackbird. However, conspiracy theorists believe the military base is also the home of the government’s black helicopters.

Black helicopters, which first appeared in news reports in the 1970s, are commonly associated with cattle mutilation, toxic chemical releases over various neighborhoods and other supposed activities conducted by the U.S. government.

The government controls the weather from Area 51

One other popular claim from conspiracy theorists is that the government has set up shop to control the weather at Area 51.

While the government has put forth research projects in the past to modify clouds and the weather, according to a report from the National Science Foundation, there has been no evidence that this research took place at Area 51.”

One thing is for certain. Area 51 has some strange happenings and tight security surrounding it. I have always felt it is likely where new military technologies are advanced, and if some of those are coming from intercepted and downed alien spacecraft it would not surprise me.

I hope to get inside someday and meet Alf. 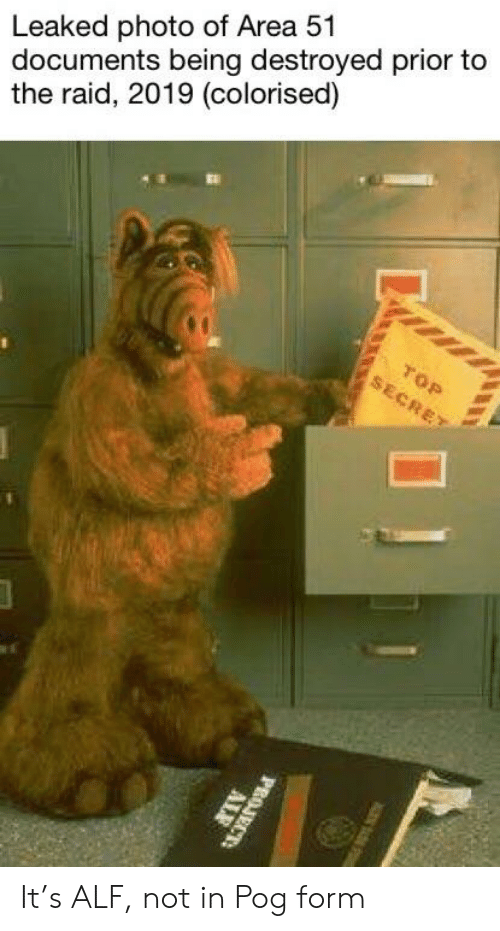 There has never been a documented cat sighting at Area-51. Now you know why…

I’m a believer in Area-51 conspiracies, but also have a terrible sense of humor at times.

2. Kapustin Yar – The one in Russia 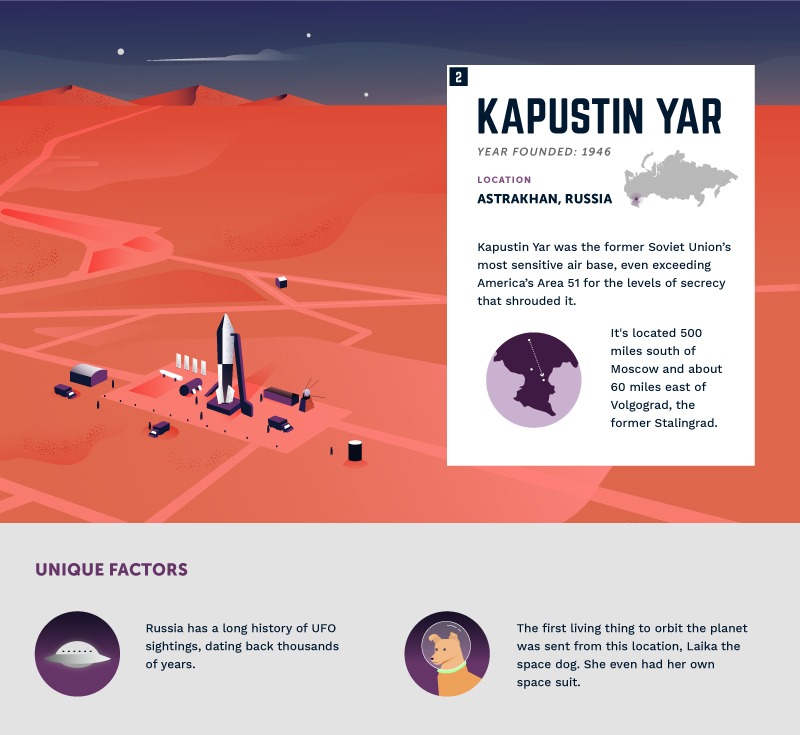 Speaking of aliens, Russia has its own base laden with incredibly spun stories of extraterrestrial intelligence. Kapustin Yar is this top-secret base. The USSR created the site for developing the Soviet space program.

Russians have a history of latching onto superstitions about magic and folklore and even incredibly detailed and elaborate alien sightings. For example, in January of 1986, an alien spacecraft crashed into Mount Izvestokovaya, or at least that was the report. In any event, the story became a sensation. Even the New York Times printed a piece detailing the large red sphere supposedly sighted and the eye-witness accounts of a 3-eyed alien wearing silvery overalls.

Most of these sightings occurred around the Kapustin Yar site. Since then “leaked” reports from previous employees mention underground holds with extraterrestrial air crafts and cells for conducting Alien autopsies.

The rapid advancements of the Soviet Union after such citings caused alarm for the American intelligence agencies. Subsequently, the US sent spy planes to, well, spy. The photo’s taken document bizarre geometric patterns and highly-sophisticated radar facilities. However, the actual facility is located a quarter-mile beneath the surface. What is still truly unknown and only speculated about, is what exists beneath the ground.

Kapustin Yar (Russian: Капустин Яр) is a Russian rocket launch and development site in Astrakhan Oblast, between Volgograd and Astrakhan. It was established by the Soviet Union on 13 May 1946 and in the beginning used technology, material and scientific support from defeated Germany. Numerous launches of test rockets for the Russian military were carried out at the site, as well as satellite and sounding rocket launches. The town of Znamensk and Kapustin Yar (air base) were built nearby to serve the missile test range.

Here’s an AP video from a famous 1960 disaster at Kapustin Yar:

3. Porton Down – The one with a very polite British name 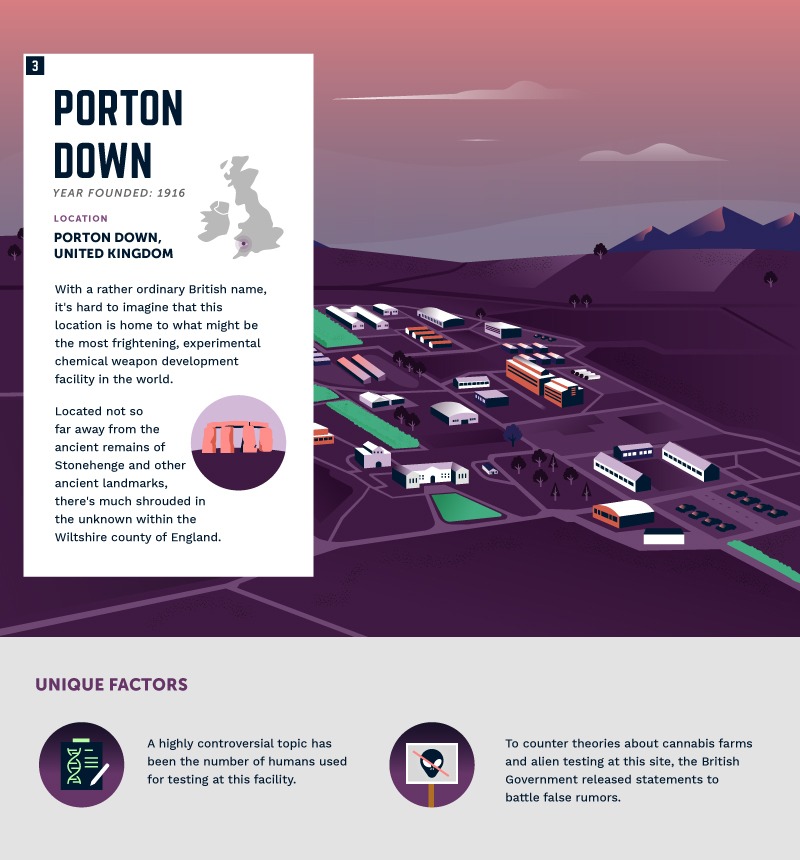 Just a skip, hop and a jump away from Stonehenge in the bright green, cheerful highlands of the United Kingdom is a research center with quite a history. It’s known for chemical and biological weapon research and laboratories exploring the world’s most dangerous pathogens. This experimental testing center conjures images of mad scientists with bubbling potions and goes by the name of Porton Down.

The British christened it during WWI as the War Department Experimental Station. Mostly, it served as their reaction to battle German chemical warfare. As the British can often have double meaning behind their words, what really happened here was much darker than it sounds.

From poisoning agents to nerve agents, this site created and tested deadly warfare weapons. The most controversial problem is the reported human test subjects used in the past and, more recently, animals. Otherwise, the data produced from these experiments gave the military and scientists a better understanding of how to defend against chemical attacks. Though, it has certainly been at a cost.

4. South China Sea Bases – The one(s) floating in the Ocean 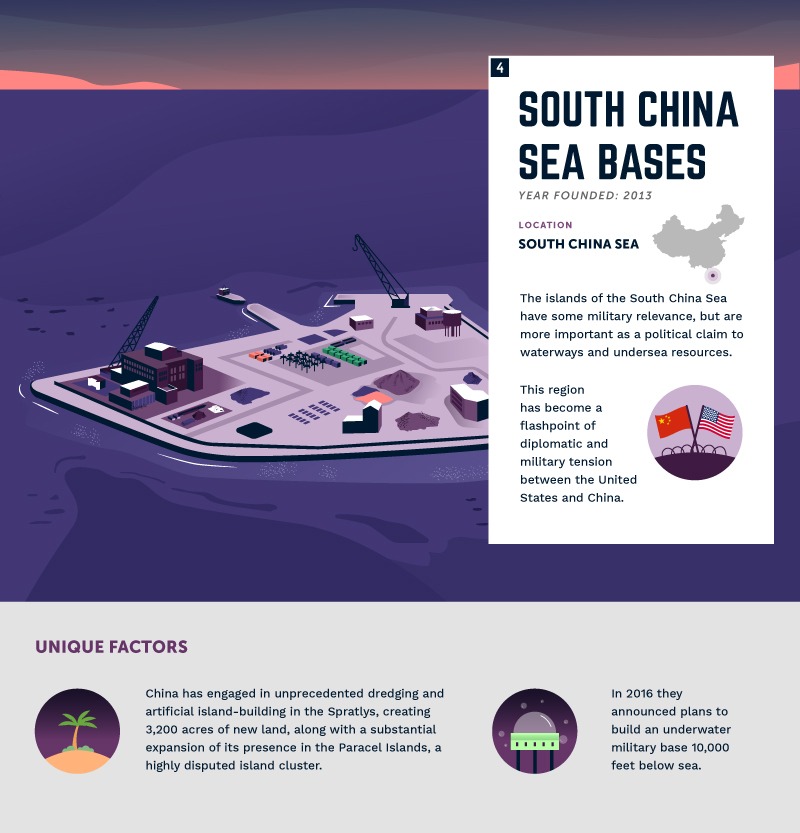 You can go on Youtube to hear voices shouting out warnings to pilots flying too close. “Leave immediately and keep far off.” These are the voices of Chinese patrols trying to keep some mystery around their fabricated islands in the South China Sea.

Just a few years ago these islands didn’t exist at all. They were just shadows of reefs under the water near the Spratly Islands. Located in a highly contested ocean territory, it’s a no-mans-land where 5 countries lay claim to the waters. No one can be sure what China is doing here. Whether they aim to control shipping and trade, take over the oil and natural gas rights or expand its military presence is unsure. Perhaps it’s all the above.