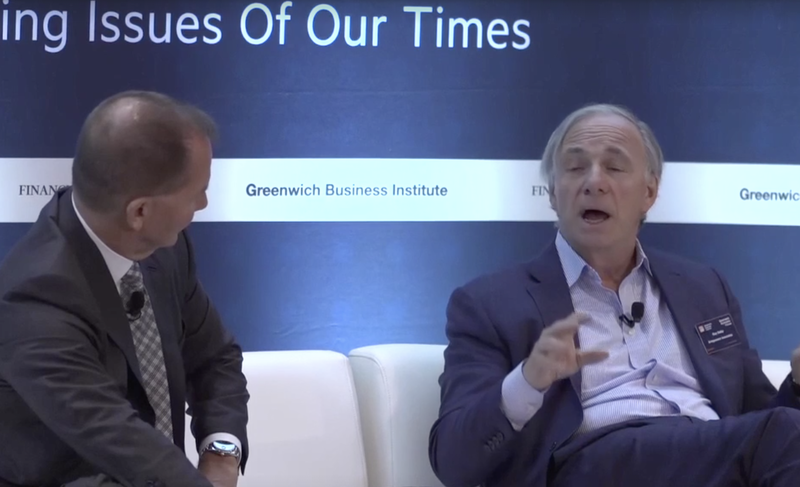 Two hedge fund icons – Bridgewater founder Ray Dalio and Paul Tudor Jones – joined Yahoo Finance for the 2nd annual Greenwich Investment Forum earlier this month. Speaking directly after Connecticut Gov. New Lamont, with whom Dalio is working to bolster Connecticut’s schools via a $100 million gift  – the largest charitable gift the state has ever received, PTJ and Dalio focused their “Fireside Chat” on the flaws of Fed policy, the dangers of America’s ballooning budget deficit, and the steps that must be take to “stop us from killing each other” in a violent revolution, as Dalio warned.

PTJ spoke first, starting with a few words about President Trump, praising him as “the greatest salesman” to ever enter the American political arena. After all, didn’t Trump convince the Republican Party – once the party of fiscal piety – that 5% budget deficits 10 years into an economic rebound are necessary to protect the economy. Similarly, didn’t he also convince the Fed – “through great moral suasion” – that returning to real negative rates with unemployment at 50-year lows was a necessity?

Both Dalio and PTJ agree that, while clearly stimulative in the short-term (obviously just take a look at the S&P 500), these decisions will set up the US economy for one of the most punishing downturns in history, which is why PTJ always laughs when Jerome Powell is quizzed about financial conditions and whether he sees bubbles anywhere. Because at this point, the whole market is a bubble.

“Clearly, the low interest rate policy we’re pursuing is creating an excess and that excess is in our public deficits. Which, at the current pace, in less than ten years we will have exceeded the threshold where Greece had its issues,” PTJ said.

And when we look abroad, the full scope of this heady “fiscal-monetary mix” becomes even more obvious.

“I look at our fiscal-monetary mix, it’s the most stimulative that I’ve ever seen – again, economically adjusted – no wonder the stock market is at new highs. It’s literally the most conducive environment – certainly in the short run – for economic growth and strength that I’ve ever seen. You add on that an 11% budget deficit in China, the second largest economy, and 3%.”

Dalio jumps in: Today, the number of companies producing earnings is the lowest since the dot-com bubble because “companies can sell dreams rather than earnings.” That’s thanks to the $15 trillion sloshing around the financial system that has been injected by central banks

“Because the world is looking for yield, companies can sell dreams rather than earnings. The number of companies that produce earnings is the lowest since the dot-com bubble in terms of their need because you can sell a dream.”

Dalio then moved on to highlighting his “1930s” hypothesis. There are three things that exist today that haven’t existed since the 1930s: A wealth gap that’s driving populism on the left and right, the absence of effective monetary policy, and an emerging world power (China) challenging an existing world power (the US).

All of this is happening at a time when, according to Dalio, the current dollar-centric global reserve system is nearing its end.

“In my opinion, we’re near the end, in the late stages, of our reserve currency system – it’s a fiat monetary system. Not only do we have negative rates, but we’re going to have much bigger deficits…and that’s not half the story. Because the larger story is the unfunded liabilities…those are pension liabilities and debt liabilities.”

War can take several different forms, as most Americans are no doubt aware at this point: As Dalio explained, there’s a trade war, a technology war, a geopolitical war and there could be a capital war.

And the US isn’t in a great place to carry on this fight. The situation will be even worse when the cycle turns and we’re plunged into a punishing economic downturn.

It’s not just the budget hole, there are also pension shortfalls and other obligations that the federal government must backstop: “We have a lot of IOUs that are either going to be funded by tax increases or spending cuts.”

If we don’t find a way to fix the system and fix wealth inequality, bad things are going to happen. But Dalio insists that increasing the size and distribution of the pie is still possible.

“The system doesn’t work, it’s gone mad, then the reason the system is broken is because it’s not an equal opportunity system. There are justifiable complaints about education…it needs to be reformed in a way that works better – we can increase the size of the pie in the same way that you can divide it better.”

PTJ grabbed the microphone next to share a few thoughts on MMT and some of the Dems who are running in the primary. Jones said MMT reminds him of the fight to legalize marijuana because 30 years, it would have been dismissed as a crackpot theory…but now it’s being taken seriously.

“Twenty years ago, Japan medicinalized it by implementing a form of it with the BoJ…now we’re at the point where it’s so wildly accepted that we sugar-coat it and put it in gummy-bear form. And it’s this wildly accepted next stage that there’s a problem. The typical recession means the budget deficit should increase by 10% to 30%.”

Biden and Buttigieg represent a middle ground: with the S&P 500 likely reversing some of its recent gains, but only enough to bring us back down to like 2,700, around where we started 2019.