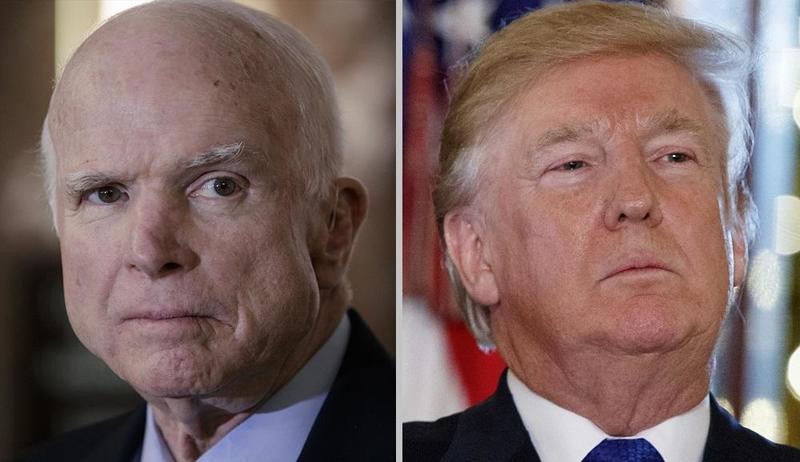 The controversial report from Inspector General Michael Horowitz into the FBI’s investigation into Donald Trump’s 2016 campaign revealed many concerning details. One was that Christopher Steele’s dossier was used in the case to the Foreign Intelligence Surveillance Act (FISA) court to secure a wiretap on former Donald Trump campaign official Carter Page after the DOJ found no probable cause to do so. The report also revealed that late Senator John McCain provided former FBI Director James Comey with reports from Steele after the FBI terminated the former British intelligence officer as a source, Breitbart reports.

McCain reportedly gave Comey five new Steele reports that were not previously in possession of the FBI, although it’s not clear if McCain knew at the time that Steele was no longer an FBI source. Regardless, the new reports were allegedly obtained by McCain from Fusion GPS co-founder Glenn Simpson. Fusion GPS was notably hired for anti-Trump opposition research by the president’s opponents in the primary.

“Several weeks later, on December 9, 2016, Senator John McCain provided Corney with a collection of 16 Steele election reports, 5 of which Steele had not given the FBI,” the IG report reads. “McCain had obtained these reports from a staff member at the McCain Institute. The McCain Institute staff member had met with Steele and later acquired the reports from Simpson.”

According to Breitbart, the unnamed McCain staffer is David J. Kramer, who reportedly gave the Steele dossier to BuzzFeed News, which published the document in full on January 10, 2017.

Devin Nunes writes letter to Adam Schiff pointing out several serious errors Schiff made in characterizing Steele dossier, Page FISA, more. ‘It is clear you are in need of rehabilitation…’ pic.twitter.com/qoY3p7EJOo

The Steele dossier as a vital part of the FBI’s investigation into Trump’s 2016 campaign, at least in terms of the FISA. Writing for The Washington Post, Erik Wemple highlights that Horowitz concluded that much of the material in the Steele election reports could not be corroborated, which squashed the hopes of pundits like MSNBC’s Rachel Maddow, who put their faith in the report. In addition, Horowitz concluded that there were certain allegations that were inaccurate or inconsistent with information gathered by the FBI. The information that was corroborated related to time, title, and location information, much of which the report noted was publicly available.