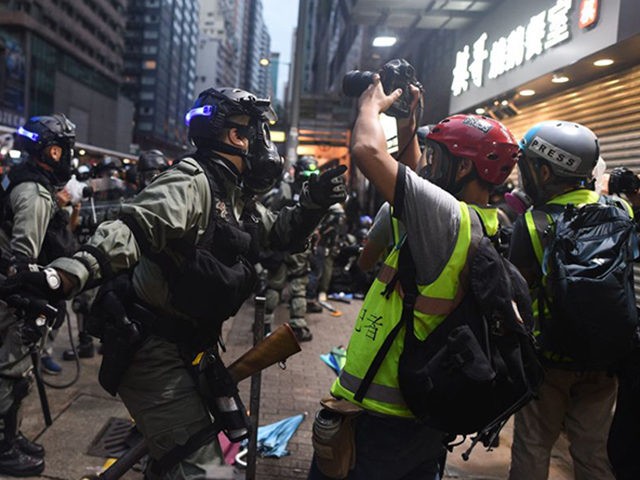 The Committee to Protect Journalists (CPJ) on Wednesday released its annual report on journalists in prison and found China taking the top spot from Turkey, ending a three-year winning streak.

Former world champion oppressor Turkey remained in second place, with Saudi Arabia surging ahead to tie with Egypt for third. Eritrea, Vietnam, Iran, and Russia fought to round out the list of dungeon keepers.

CPJ found little reason for celebration in Turkey, noting that it might have fewer journalists currently in jail — 47 in 2019 versus 68 the previous year — but that is largely because President Recep Tayyip Erdogan’s government has been able to “stamp out independent reporting and criticism by closing down more than 100 news outlets and lodging terror-related charges against many of their staff.”

The sheer number of political prosecutions clogging Turkish courts since the unsuccessful coup attempt against Erdogan in 2016 is reportedly slowing down the process of actually tossing people in jail, but many Turkish journalists have been told they are only one wrong move away from getting arrested or re-arrested. Many Turkish reporters currently living outside the country have been sentenced in absentia and know they would be arrested if they returned home. In short, reporters in Turkey have grown more fearful, not freer.

Over in China, CPJ saw a campaign of ruthless suppression as Communist Party leader Xi Jinping “consolidated political control of the country and instituted ever tighter controls on the media.”

In addition to heartily participating in the disturbing worldwide authoritarian craze for imprisoning people accused of spreading “fake news,” the Chinese are fond of jailing pesky reporters with the all-purpose charge of “picking quarrels and provoking trouble.” Merely describing the Hong Kong protests in less than sternly critical terms can get Chinese reporters arrested as pickers of quarrels and provokers of trouble. Unsurprisingly, a great deal of actionable picking and provoking occurred in Xinjiang province, home of the Uyghur Muslims, where journalists were marched into concentration camps along with everyone else.

Saudi Crown Prince Mohammed bin Salman also stood accused of cracking down on opposition journalism as he consolidated power. CPJ charged journalists in Saudi Arabia have been jailed without due process and sometimes without even being informed of the charges against them. There have been “widespread reports of torture,” including evidence of “authorities beating, burning, and starving political prisoners.”

Egypt released some of its imprisoned journalists in 2019 only to put them on a stringent form of parole that required the “freed” reporters to spend a great deal of their time checking in at police stations. As in Turkey, the Egyptian government has a predilection for accusing journalists of supporting terrorism and jeopardizing the stability of the government.

CPJ pointed out a few disturbing trends for imprisoned journalists worldwide: “Politics was the beat most likely to land journalists in jail, followed by human rights and corruption,” and “More than half of those imprisoned were reporters publishing online.”

The majority of journalists detained around the world were arrested on charges that boiled down to attempting to undermine the state, but the share arrested for “fake news charges” is up to 12 percent. According to CPJ, a remarkable 23 percent of journalists currently in detention have never been formally charged with a crime at all.