The most difficult time to remain centered and focused is during their last stages as everyone around you is going nuts. Logic has been tossed out the window, sentiment is manic, and every narrative – the stories we hear and use to make sense of our world – is thoroughly ungrounded.

After a decade of price deformation — such as UBER being valued by the ““markets”” at $45 to $50 billion despite having no viable path for ever making a profit — it seems that practically everyone has lost the ability to perform even basic math or reality checks.

For example, this week — for what must have been the 42nd time — the Trump administration has proclaimed a massive victory in the China Trade Deal.

The narrative being sold to us is that along with the immediate roll-back of tariffs (which is Trump caving, not ‘winning’), China will buy $50 billion of US agricultural products in 2020.

Huge excitement in the global equity markets has greeted this news. Stocks exploded higher and bonds have been sold off. Unleash the hounds of economic growth!!

All this, based on the premise that China has (verbally) agreed to buy $50 billion of US agriculture products in 2020.

What does $50 billion a year in Ag trade look like? Is it even possible?

What was that all-time record?  It was just $26 billion. 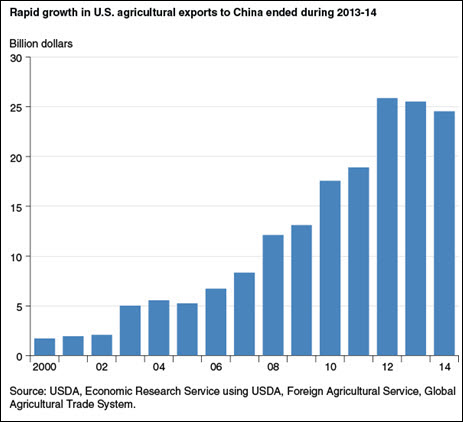 But now, suddenly China is going to double that amount?  In a single year?

After securing and formalizing huge trade deals with Russia and Brazil?  After being so dissed during the trade negotiations that China’s press and ministers openly criticize the arrogance and hostility of the US?

Yeah, that’s not very likely at all, is my assessment. China is not going to stiff its new trade partners just to make Trump happy.

More than that, it’s also unlikely that China could even find a way to spend that much on US products: 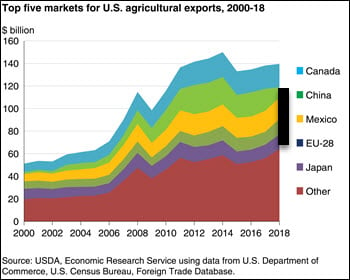 The entire US Ag export market was $140 billion in 2018.  For China to suddenly become $50 billion of that would be rather disruptive to say the least.

The black bar I’ve drawn on the above graph represent $50 billion of goods.  If China were to become that large of a consumer, it would displace the equivalent of 100% of its current consumption, plus that of Mexico, the EU and most of Japan.

This is just so completely brain-dead obvious that I’m surprised it went completely unnoticed by the entire US financial press.

Though I shouldn’t be, because the tail end of a massive bubble comes with a near-complete loss of the masses’ ability to think or reason.

Of course, we humans have been here many times before: