There is evidence that US Treasury bond yields may continue to rise, exposing the debt trap in which the US government finds itself. Market participants don’t realise it yet, but the dollar-based monetary system is spinning out of control. This will become obvious as the crisis stage of the credit cycle, which we now appear to be entering, becomes evident.

The outlook for monetary inflation is dire. Not only will governments fund themselves through QE, but central banks will be forced to inflate even more to pay for government deficits significantly greater than currently forecast. And when markets stop taking government statistics on inflation as the Gospel Truth, the interest cost of government funding will rise and rise, reflecting an increasing rate of time preference for fiat currencies which will be losing their purchasing power at an accelerating rate. 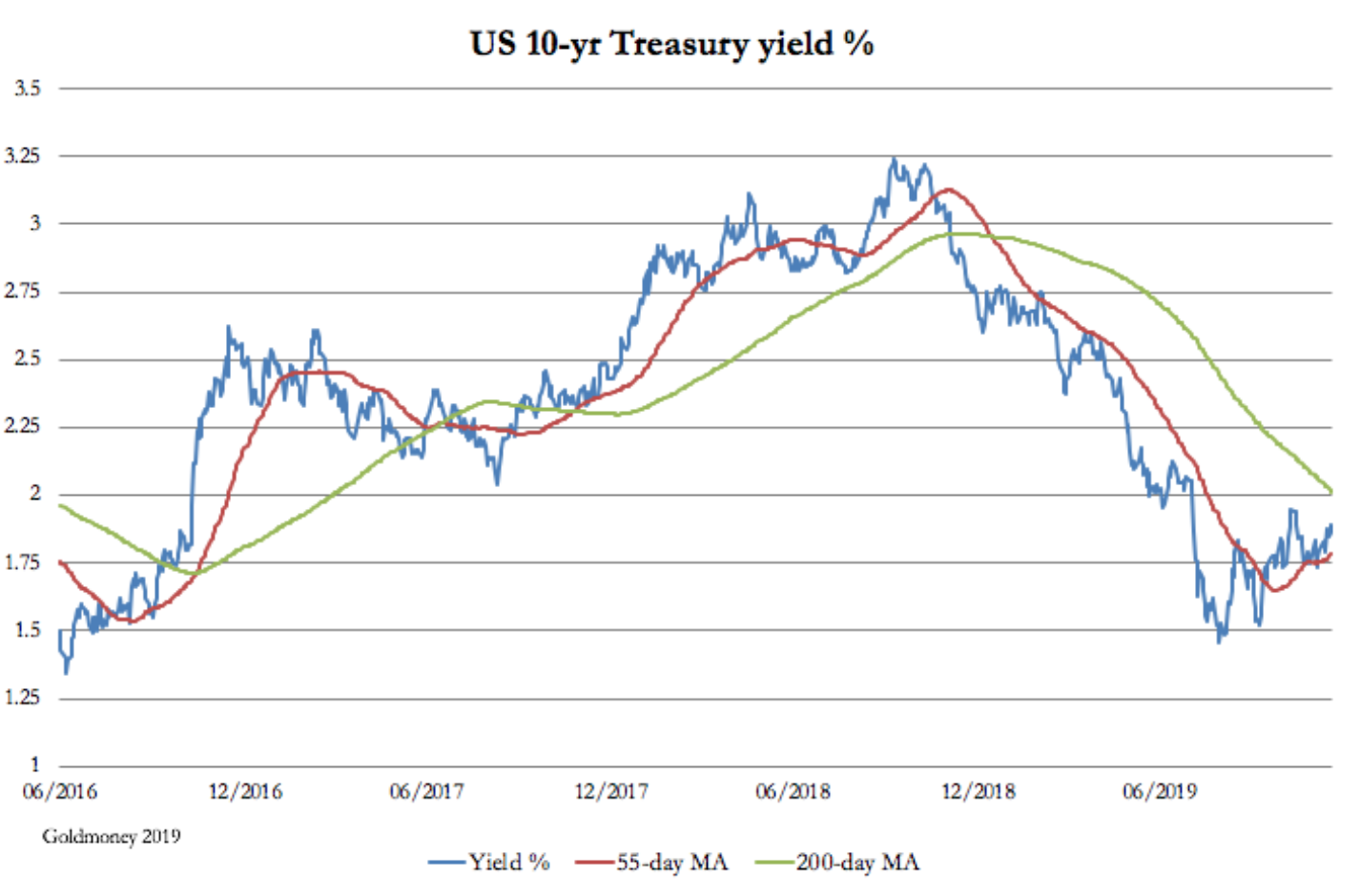 The chart above, of the US 10-year Treasury yield is shows that its yield bottomed at the end of August, when it had more than halved from the levels of October 2018. What, if anything, does it mean? Some would argue that it is good to see a positive yield curve again, implying the recession, or the risk of one, has gone away. But if US Treasury yields have bottomed out, then in the fullness of time they will continue to rise. Chartists might even claim it is setting up for a bullish golden cross, like the one earlier in the chart on 17 November 2016, which marked the beginning of a significant rise in bond yields.

That would be a worry, since equity markets have flown to places where bond yields don’t exist. But there are more solid concerns about the course of bond yields, other than charting ephemera. Despite the massive expansion of money and credit since the Lehman crisis, there is a shortage of liquidity, because the Fed is having to inject half a trillion dollars into the banking system to keep overnight levels suppressed at the Fed Funds Rate target.

Informed opinion suggests that there is indeed a liquidity crisis. The banking system in New York has become strained through banks loaded with US Government debt and providing repos to hedge funds who have shorted euros and yen to buy T-bills and short-dated government coupon debt. The shortage has occurred because the largest banks, designated globally systemically important banks (GSIBs) must demonstrate excess reserves to cover obligations thirty days out. The strains for this Basel III requirement are expected to increase at the next quarter-end, i.e. 31 December.

These strains first became evident in the repo market, which blew up three months ago, on the day Deutsche Bank completed the sale of its prime brokerage to BNP. We don’t know if these events were related, but as any investigating detective will tell you, pure coincidence must be dismissed until proven otherwise. In any event, the problems in the repo market have continued, so having noted that perhaps the Deutsche Bank sale did not go as planned, we must go with the GSIB excess reserves explanation.

Looked at in this light, the persistent rise in UST bond yields is threatening. Unless the Fed simply floods the markets with liquidity, they seem set to rise further. If the Fed does not, the GSIBs have two courses of action, and they may be forced to take both. First, they could be forced to sell down their US Treasuries in order to create intraday liquidity needs by releasing some of their required reserves to be categorised as excess. Second, they can refuse to roll hedge fund repos, forcing hedge funds to sell US Treasuries and T-bills and then sell their dollars to close their shorts in euros and yen. The withdrawal of liquidity could wipe out one or more major relative value (RV) funds, invoking the ghost of Long-Term Capital Management, which ran into trouble in 1998. [i]

All this is now known, so it would be surprising if the Fed fails to act to contain a year-end crisis. But its actions are limited to providing liquidity for the banks. It will be up to the banks if they decide to use that liquidity to continue to accommodate the RV funds.

Let us assume for a moment that we get through the year end without mishap. We will not have dealt with the underlying problem, which is who is going to buy the $1–1½ trillion of US government debt to be issued in 2020. In the past it has been principally foreigners, banks and RV hedge funds as described above. On a net basis the US saver has not been involved for a very long time, except passively through managed pension funds.

According to US Treasury TIC data, in the year to October major foreign holders added $580.5bn to their holdings of Treasury bills, T-Bonds and Notes. The balance will have come directly and indirectly from domestic credit expansion, including the banks and the RV hedge funds. But from August, foreign investors have been net sellers to the tune of $77.4bn. Until then, every successive month had seen an increase, so it appears foreign demand is stalling, which could have fed into the repo crisis as the GSIB banks in New York and RV funds ended up with too much US Government paper.

Foreign dollar demand is almost certainly affected by the sharp slowdown in global trade. This has happened for two reasons: President Trump’s tariff war against China and others has stalled international trade and at the same time, having been expanding for the last nine years, the credit cycle is due to run out of steam. Together they are recessionary headwinds, probably synergistic, which reduce the level of dollars in in the correspondent banking system foreigners need to hold for liquidity.

China is the second largest holder of US government paper and has been reducing her position in recent months. As to her future reserve policies, commercial considerations are being complicated by politics. She understands that America is desperate for global investment flows to finance US Government debt, and that China’s infrastructure plans would compete for them which explains America’s hidden agenda over Hong Kong. China bungled her management of that situation, and apparently is now exploring the use of Macau as an investment channel for foreign inward investment.

It is probably too late, the damage to investing in China having been done. But it is hard to see why China should just roll over on this issue and continue to buy US government bonds. More likely US Government debt will now be viewed as a source of funds to replace lost inward investment through Hong Kong.

We can now see a best and worst case for the dollar and US Treasury funding. The best case is stagnating demand from abroad, which throws the onus onto domestic investment, which, in the absence of an increase in savers, will be through QE and the inflation of bank credit.

The worst case will see not only stagnant foreign demand, but active selling down of current positions, due to slumping economies and China in particular selling actively. American investors seem generally complacent about this possibility, arguing that foreigners will always need dollars, and more so in a credit crisis. While there is some force in this argument, it ignores the fact that foreign ownership of dollars and dollar investment is already very high at roughly $23 trillion of which over $4 trillion is in deposit accounts, while US ownership of foreign currency liquidity is a relatively trivial figure.

Bearing all this in mind, we must assume that at a minimum US banks and hedge funds between them will be funding all the budget deficit and may even have to absorb existing stock from foreigners. But surely, one imagines a critic asking, in the absence of a change in the savings ratio, a budget deficit is a matter of an accounting identity and will give rise to a similarly sized balance of payments deficit, and so long as dollars accumulate in foreign hands, they must form the capital inflows that finance the budget deficit. Therefore, dollars will continue to accumulate in foreign hands, and they must be invested.