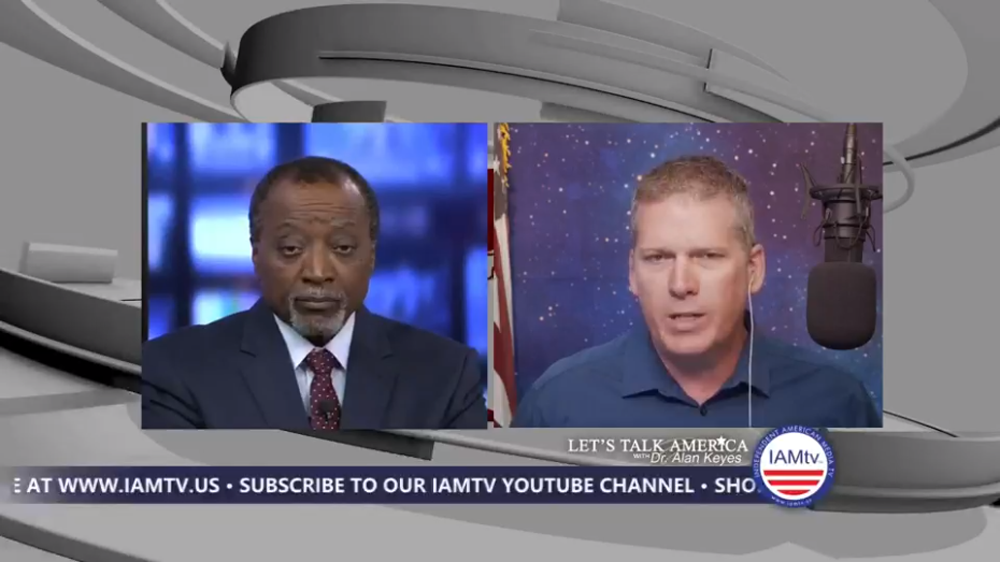 Dr. Alan Keyes, former U.S. Ambassador and presidential candidate, is one of the most admired conservative thinkers in America today. He recently launched a new talk show called “Let’s Talk America,” broadcast via IAMtv.us and now at the IAMtv channel on Brighteon.com.

Dr. Keyes recently invited me to join him for an interview, where we explored many of the most important topics of the modern era. This conversation is being called “AMAZING” by people who continue to text me and write me about the mind-expanding experience of listening to this. From my perspective, I always find it intellectually stimulating to be able to speak with people of very high intelligence who also have the moral courage to explore topics which are censored or even ridiculed by the anti-human elitists who control “establishment narratives.”

The most notable thing I can say about Dr. Keyes is that he uplifts the people around him merely by his presence. Put another way, I am a “smarter” person when talking to Alan Keyes than when recording podcasts on my own. Alan Keyes is a real treasure for humanity, and his clarity of thought on nearly every subject is astonishing. If you’ve never heard Alan Keyes speak, you’re in for a real treat.

Here’s the full transcript of the interview, with slight edits for clarity. See full video embed, below.

Dr. Alan Keyes: Welcome to IAMtv. I’m Alan Keyes and this is Let’s Talk America. Today we have a really exciting program and it’s especially exciting for me because this is someone I’ve been reading his work for years, following the work that he has done, learning from him for many years but I can’t tell you the impression that has been made over me over the years because this is somebody who actually corresponds to the descriptions that are often given to America’s Founding Fathers. A polymath, people who know a lot about many things but who apply them in a way that then respects the common sense and the common good of the people that they’re communicating with. And that combination, believe it or not, is fairly rare and has become as rare as hen’s teeth as they used to say, in our own time. And yet this is an investigative journalist who is also – is one of the people on top of our computer science. This is going to be an exciting show. Stay right there, we’ll be right back.

Dr. Keyes: Welcome back. Well, today’s show involves someone who’s known – widely known – as the Health Ranger but it doesn’t go anywhere near covering the accomplishments of this extraordinary man. He’s somebody who at a young age, had already mastered the world of computer science. He built and then sold a company and then embarked on an extraordinary career that has ended up being a career of service to everyone who is trying to use the Internet to gain real and substantial knowledge especially in fields that are vitally important to our lives like health and how you maintain it. But also, with the willingness, to tell the truth about the things he has found over time that then led him to become an extraordinary investigative journalist who broke stories that then rocked both the scientific, the pharmaceutical and other worlds, again and again, and again. It’s with great pleasure, and as you can see, a lot of excitement that I introduce today’s guest, Mike Adams. The Health Ranger comes to visit us here at Let’s Talk America and we’ll talk about a range of things. With me, of course, as is now often the case, is Bob Sisson. He is my inspiration, the inspiration of IAMtv, and he is also, I think, really excited … with the guest that we have today. Welcome to the show, Mike. It’s an extraordinary pleasure to have you today.

Mike Adams: Well, thank you both. I am thrilled to be here. Thank you for the invite. I’m really looking forward to this conversation, so wherever you want to take it is just fantastic. But thank you for having me here. It’s great to join you.

Note: Here’s the full interview on video. You can follow more interviews with Dr. Alan Keyes and Mike Adams at the IAMtv channel on Brighteon.com.

Dr. Keyes: You’re welcome. Well, the first place I want to go is to talk to you a minute about a couple of things that – you have a fascinating biography that’s presented on the Health Ranger site. And it’s like some of the things that are key beliefs in your life. If you don’t mind my reading two of them, they lead to a question that I think makes a good introduction to the show. Because you are yourself, somebody who is both a well-educated – self-educated – well-read scientist who has applied to that science in ways that produced extraordinary results and are still doing so. But you are also somebody who’s remarkably honest about the – I guess some of the problems we’re currently facing with the way science interacts with the challenge of really informing people.

He says, “Modern science is currently run by a “cabal” of closed-minded, dogmatic “intellectual monopolists” whose mission is to block the advancement of real science and protect the profit interests of drug companies, vaccine manufacturers, and chemical companies. Science has been hijacked by corporate interests at the expense of progress.” Later on, in the same exposition of his thinking, it says, “The for-profit medical system that exists today is highly destructive to human civilization and threatens the very future of it. The system rewards keeping the population in a never-ending state of disease and suffering rather than finding ways to prevent or cure disease.” That was one of these times when I read that I said to myself, you know, it’s just such a rare pleasure to hear someone exactly state what’s on your mind and you did it wonderfully. But I’d be kind of interested as to what you see to be both the sources of this problem and also the range of its impact on the lives of the folks who would be out there in the audience. We think of healthcare as an area that you should be able to trust with your life, right? But it seems that it’s gone in other directions in our time. Well, why do you think all this is so?

Mike Adams: So as a fundamental principle, I believe in free markets, I believe in competition and I believe in consumers being able to make informed choices about products and services that can enhance the quality of their lives. But what’s happened under this rigged system now, which is not a free market system anymore, it’s a rigged system where the FDA grants monopolies to pharmaceutical companies that trick the FDA with rigged studies. For example, did you know the FDA doesn’t conduct any drug studies itself? It relies on drug companies to conduct their own studies. Drug companies then may conduct, let’s say, 20 studies and cherry-pick the ones that they want to present to the FDA. And the drug companies have a really dishonest relationship with clinical trial companies that are known to rig studies in their favor, and that’s their business model, so what we have is faked science, rigged studies.

In one case, virologists who used to work for a prominent vaccine manufacturer filed a false claims act with the federal government explaining that they were directed by the management of their company to spike blood samples from their human trial participants with animal antibodies against mumps and measles and rubella in order to trick the FDA into thinking that their MMR vaccine was effective when it wasn’t. And so, we have this revolving door of fraud. And the profit in it is in convincing everybody that they’re always sick, they always need synthetic chemicals, that they always need more and more vaccines. There’s never a limit when the truth is that these are not pathways to health. And society is harmed as a whole when people are harmed by these pharmaceuticals: They lose cognitive function, they lose longevity, and society suffers both in the GDP, but also even spiritually. People’s quality of life is reduced by this scourge on society. So that’s my short answer.

Dr. Keyes: Well, you know, Bob who is with me today, he has some firsthand experience with these effects and he has encouraged my interest, which has been there for years, but he encouraged my interest and I got actively involved with the work that he has been doing in Uganda and elsewhere, promoting an approach that is actually based on common-sense experience. And he’s also, of course, encountered some of the very things you talk about. So you must be excited, not only that Mike is here, but that he’s talking exactly about the things that are so important.

Bob Sissen: Hey, Mike. Excited does not really tell the truth about me. I woke up — I thought you might’ve been on yesterday because I couldn’t get in touch with Jim, so I couldn’t sleep night before last, anticipating what might’ve happened yesterday. And then the same thing happened last night about 2:30 – the Lord woke me up and I couldn’t go back to sleep for a while, so I was praying about what all might happen and how delightful you might be and you’ve more than fulfilled that, so we’re really thrilled to have you here… Let’s talk a little bit about glyphosate now, and you said you knew Dr. Stephanie Seneff?

Mike Adams: Yes. We’re familiar with her work. We’ve reported on it many times. And of course, I run a mass spec laboratory where we are doing quantitative analysis for glyphosate right now. I’m actually going there after this interview to do that exact work. We do a lot with glyphosate.

Bob Sissen: Yes. So glyphosate is apparently going to emerge as the biggest carcinogen that – at least it’s being made public right now. We’ll find out about other things they’ve been doing to poison us as time goes on; everybody remembers the “fluoride’s really good for you” scam that they pulled for multiple years. But anyway, Dr. Seneff has been working with Kerri Rivera, and we got a little clip that I wanted to show. Kerri Rivera has been curing autism for years and years and years. And this clip shows the moment that she understood that chlorine dioxide destroys glyphosate and I just want to show that. It’s about 30 seconds long. If we could cue that up, please.