Yesterday, the President sent a letter to the Speaker of the House regarding today’s impeachment proceedings. We urge you to read it. Today, the President will be in Battle Creek, Michigan, speaking directly to the American people about the insanity taking place in the People’s House. As of about 10am EST, when this was being written, it is noteworthy that Nancy Pelosi, Jerry Nadler, and Adam Schiff do not appear to be playing significant public roles, all under various pretexts, MIA! Today will be a little like watching a dirty movie, a lowering of the standard of impeachment which must be repudiated by a new House, devoted to the Constitution as of November 2020, lest we descend, as the Founders feared, into little more than a parliamentary system controlled by the hidden hand of the financial class.

The shock of the Horowitz Report, showing some of the visible parts of the coup which has been ongoing here since November of 2016, is now beginning to take hold. The FISA Court, facing the revelation of its own deep corruption, and facing direct calls for its elimination from Congress, has scolded the FBI and told them to come forth with reforms. Attorney General William Barr, leading an investigation whose present targets should be John Brennan and Barack Obama will be interviewed on Fox News this evening. We will continue to focus on the imperial hand in all of this, represented in the resolution of the British House of Lords that under no circumstances can this President have a second term.

We will be briefing these events today and you can expect our further analysis of the battle front tomorrow. We continue to be focused on the central battle, that between those who support an oligarchical model of society, premised on the assumption that men and women are no better than beasts, and those, like our founders and Lyndon LaRouche, who believe that individual men and women bear the divine spark of reason, and that political economy is the highest art –that of fashioning instruments of statecraft to bring forth that divine spark of creativity in the nation’s citizens.

This President believes that the nation state is the instrument for doing so. He opposes the contrary globalist vision which seeks to reduce the world’s population by any means necessary because its masters have no idea how to “promote the general welfare for ourselves and our posterity.” Their latest financial bubble teeters on the edge of collapse and they are desperate to preserve their rule. Lyndon LaRouche believed that the Constitution’s preamble, dedicating this nation state to promoting the general welfare of the population, embodied the mission of the government, the manifest destiny of a nation founded on individual freedom in which citizens must choose to use their divine nature to promote the common good, if the Republic is to survive. Think about that when you view the partisan spectacle of the insane Democrats today. Friedrich Schiller the great German poet said of the French Revolution, ultimately a blood bath which destroyed that nation for generations which followed: “A great moment found a little people.” Resolve that we shall not be so. 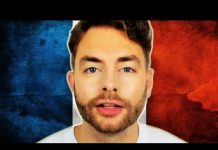