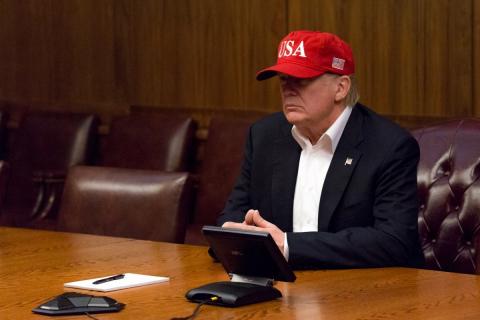 Since before President Donald Trump was even inaugurated to his first term in January 2017, there were shady characters in the Deep State working to undermine him and drive him from office.

It began with so-called “Russian collusion” — accusing the president of working in concert with Vladimir Putin to “steal the election from Hillary Clinton.”

That debunked narrative was actually part of a larger scandal, Spygate, which involved President Obama and several high-ranking officials in his federal law enforcement, intelligence, and diplomatic bureaucracy.

Now, after all of that was put to rest by the Robert Mueller investigation, the new false narrative is this: Trump threatened to withhold military aid from Ukraine unless that country agreed to investigate Joe and Hunter Biden as well as interference by some Ukrainian officials in the 2016 election, on behalf of Hillary Clinton.

But for some reason, none of the people involved with this massive scandal — former FBI Director James Comey, former Asst. Director Andrew McCabe, former CIA Director John Brennan, and former Director of National Intelligence James Clapper, among others — have been forced to testify in the House’s impeachment inquiry that is currently underway, even though they would have plenty to say about all of this.

That’s because Democrats who now run the House and are conducting the impeachment inquiry aren’t about to call these people in. They’re not interested in allowing the American people to hear the truth: That Donald Trump has not done anything even close to being deserving of impeachment.

So instead, these Democrat reprobates in the House are calling all of the president’s closest aides and advisers, including former White House counsel Don McGahn.

Democrats will burn down our institutions to ‘get Trump’

As reported by USA Features News:

Brown overturned a half-decade’s worth of legal understanding between the Executive and Legislative Branches regarding the latter’s authority to compel administration officials to provide congressional testimony.

The ruling said that ignoring a congressional subpoena is “an affront to the mechanism for curbing abuses that the framers carefully crafted for our protection.”

During his program Tuesday, he blasted Brown as a “tyrannical” judge who was depriving President Trump of his Executive Branch authority not to mention his right to private legal counsel.

“A president must be able to have legal advice … without Congress interfering, whether it’s an impeachment proceeding or any other proceeding,” Levin said.

“Otherwise, there’s no balance of power, because the House of Representatives — unless there’s a criminal investigation — is not subject to any subpoenas, they’re not subject to FOIA because they don’t apply it to themselves, and they have all the legal counsel they want — privileged,” he added.

“If the president can’t turn to a lawyer for legal advice, then it’s a disaster. So what she’s doing is she’s tilting the balance of power far away from the president to the Congress, changing the structure of our government and the ability of the chief executive to function,” the host explained.