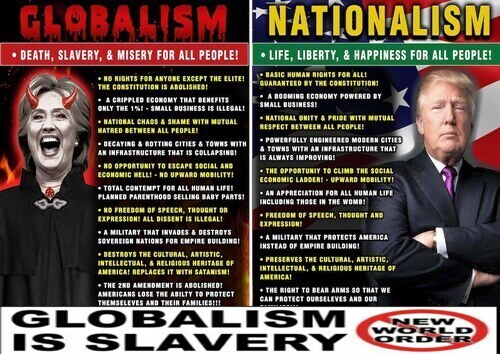 – All ‘Free Americans’ Would Be ‘Slaves’ If Democrats & Globalists Had Their Way!

It is a shock, surprise, and not slander to admit that slavery arrived in the New World long before Europeans arrived. In several tribes in the American Northwest, slaves constituted between 10 and 15 percent! Indians held red, white, and black slaves. And ate them during bad times.

However, we are not supposed to speak or write about the “noble savage” being so ignoble.

In the colonies, Europeans carved out a civilization from the forests, drained the swamps, removed the rocks, dug precious metals from the earth, and built the most philanthropic, powerful, and prominent nation in history.

During the 1600s, slavery became a trade and a valuable commercial venture. The early Puritans thought slavery was justified if the captives were taken in a just war, and even Roger Williams condoned slavery for a time!

(ANP EMERGENCY FUNDRAISER! Due to Susan Duclos’ recent heart attacks and hospitalization, All News Pipeline will need a little bit of financial help in the days ahead. If you like stories like this, please consider donating to ANP to help keep us in this ‘Info-war‘ for America at a time of systematic censorship and corruption.)

I would be unfair and inaccurate if I implied that Blacks were without some guilt in this whole wretched business of slavery. Richard Hufstadter wrote in America at 1750: “Africa had a system or systems of slavery long before white men came to the Guinea Coast, and had regularly enslaved war captives and criminals . . . Other persons sold themselves or their families for food during famine, or were kidnapped by native gangs. Many native [black] kings ran profitable slave businesses, and responded eagerly to opportunities for greater profits. The slave trade became a recognized and entirely legal form of business in Africa.”

In different parts of Africa, slavery became a major source of income for the authorities. The river ports became an efficient way to move slaves from the mainland to the New World. Whites and Blacks cooperated in this nefarious business of selling humans.

One black King of Bonny said in response to England’s demand for an end to slavery, “We think that this trade must go on,” he exclaimed. The king continued: “That also is the verdict of our oracle and the priests. They say that your country however great, can never stop a trade ordained by God himself.” And the trade went on until it seemed as if some countries would be emptied of its strongest people. Notice that the black king appealed to religion to justify what he was doing to his own people. Of course, men have used religion to justify their wickedness for centuries.

Some countries protested, but the trading in human lives went on—and grew, aided and promoted by local black chiefs. One former slave wrote, “But I must own, to the shame…of my own countrymen, that I was first kidnapped and betrayed by some of my own complexion, who were the first cause of my exile and slavery; but if there were no buyers there would be no sellers.” And there were plenty of buyers—Portuguese, French, English, and Dutch.

Historian John A. Garraty wrote: “The local king dictated the rules of trade and filled a slave ship in his own good time. The Europeans’ power lay in the insidious luxuries which became necessities: liquor and firearms.” So Whites used liquor and guns to reward black kings and chiefs for attacking their own villages at night and carrying away in chains their own people to be sold at auction in the markets of the West Indies, Latin America, and Jamestown.

The slaves were sold for two ounces of gold in some ports while in other ports, a healthy, strong male brought 115 gallons of rum to his owner. Women sold for ninety-five gallons of rum.

Some slavers were convinced that the Blacks didn’t have souls so that made slavery acceptable! However, the Portuguese believed Blacks had souls and could be redeemed like anyone else. They convinced themselves that slavery was not wrong because slaves would be taken to Christian lands where they would be exposed to the Gospel. Many thousands of black slaves were sprinkled (called baptism by some church leaders) before the ships sailed out of the harbors of the Congo and Angola.

Some have estimated that from ten to twenty million blacks were sold into slavery yet many never reached land and were buried at sea. Garraty reports they were kept below decks “in two rows, one above the other like books on a shelf.” One ex-slave Olaudah Equiano wrote, “The stench of the hold (beneath the ship’s deck) while we were on the coast was intolerably loathsome but now that the whole ship‘s cargo were confined there together it became absolutely pestilential. The closeness of the place and the heat of the climate, added to the number in the ship, was…aggravated by the galling of the chains.”

Many colleges use Equiano’s book; however, few admit that he was not born in Nigeria as the story is told, but in South Carolina and got his very interesting information from other slaves. However, Equiano’s statement was true. The air was so foul below decks a candle would not burn! Many Blacks committed suicide rather than endure such conditions while others simply stopped breathing, dying of suffocation.