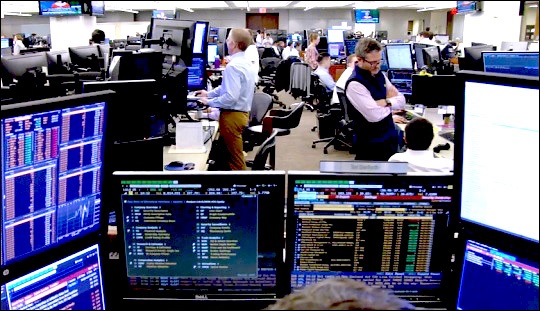 Since September 17 of this year, the central bank of the United States, the Federal Reserve, has been pumping hundreds of billions of dollars each week to unnamed trading firms on Wall Street. We know the loans are going to trading firms because the loans are being made to the 24 primary dealers (see list below) with whom the New York Fed conducts open market operations. (The list includes one foreign bank and 23 stock brokerage houses and investment banks.) The New York Fed has publicly disclosed that the loans are going to primary dealers but will not say which firms are getting the bulk of the money.

The Fed did something very similar to this under a facility it called the Primary Dealer Credit Facility (PDCF) during the financial crisis. It kept the names of the firms getting the bulk of the money secret. When the Government Accountability Office (GAO) conducted its audit of the Fed’s loans and released the results to the public in 2011, it turned out that the trading units of Citigroup, Morgan Stanley and Merrill Lynch had received 63 percent of the $8.95 trillion that was loaned under this program. Citigroup’s trading unit received $2 trillion; Morgan Stanley got $1.9 trillion; and Merrill Lynch received $1.775 trillion.

There is nothing in the history of the Federal Reserve Act to suggest that elected members of Congress ever intended that the Federal Reserve would become the lender-of-last-resort to bail out the reckless trading floors on Wall Street – and yet that appears to be what happened in 2008 and what is happening again today.

Today’s Fed loans are being made at the ridiculously low interest rate of 1.55 percent (as of last Friday) and structured as repurchase agreements (repos) with U.S. treasuries or federal agency mortgage-backed securities (MBS) accepted as collateral for the loans. This is the first time that the Fed has made such loans since the financial crisis and yet no Fed official can explain what the crisis is today. It is completely possible that the Fed is loaning money at 1.55 percent to a trading firm and the trading firm is re-loaning that money as a 9 percent margin loan to a stock trading customer or using the funds to trade for itself.

Veterans on Wall Street find it particularly noteworthy that the stock market has been hitting new highs since the Fed starting pumping out this money for a crisis that has yet to be credibly defined.

What we do know from Reuters reporting is that JPMorgan Chase withdrew the vast sum of $158 billion from its liquid reserves at the New York Fed in the first six months of this year and is now claiming it doesn’t have the liquidity to make repo loans, thus leaving the Fed as the lender-of-last resort.

JPMorgan Chase owns the largest commercial bank in the United States (Chase) with more than 5,000 branch offices that have collected $1.6 trillion in deposits from mostly moms and pops across America. Those deposits are Federally-insured (up to specific caps) by the U.S. taxpayer – who will be on the hook if a mega bank like JPMorgan Chase fails.

For more than six decades, until its repeal in 1999, the Glass-Steagall Act kept America’s banking system safe by barring Wall Street’s trading firms from merging with federally-insured commercial banks. Just nine years after the repeal, Wall Street trading firms like Lehman Brothers, Citigroup, and Merrill Lynch – which also owned federally-insured commercial banks at the time – blew themselves up. Citigroup and Merrill were resuscitated by those trillions of dollars in secret loans from the Fed. Lehman filed bankruptcy.

The normal and rational response from Congress would have been to restore the Glass-Steagall Act. But owing to the gutting of campaign finance law, Wall Street is now a major player in financing the political campaigns of members of Congress. So those dangerous trading firms on Wall Street are still under the same banking holding company roof with mega federally-insured banks.

Last evening, the CBS investigative news program, 60 Minutes, conducted an interview with the Chairman and CEO of JPMorgan Chase, Jamie Dimon. As part of the interview, Lesley Stahl strolled with Dimon around just one of his trading floors. The conversation went like this:

Jamie Dimon: “This is one of six trading floors in the building. There’s like 450 people in this trading floor. An equivalent to this in London, half of this in Hong Kong, and in 23 other countries around the world.

Voice Over: “JPMorgan Chase moves more money in a day than most countries earn in a year.

Jamie Dimon: “We move $6 trillion of money every day.

Jamie Dimon: “Every day. We deal with, like, 10,000 clients, which include governments, central banks, mutual funds.”

At this point, it would have been an excellent time for Lesley Stahl to say, “which one is the precious metals trading desk that was charged this past September by the U.S. Department of Justice with running a criminal enterprise?” Or Stahl could have asked: “Where is the trading desk that was criminally charged by the Justice Department in 2015 for rigging foreign exchange trading?” Or Stahl might have queried Dimon on the location of his trading desk that admitted to the European Commission that it was part of a cartel rigging the interest rate benchmark known as LIBOR. Or, she could have galvanized her audience by asking to see the trading floor where the London Whale traders blew a $6.2 billion hole in the deposits of JPMorgan Chase’s insured bank by gambling in derivatives in London in 2012.