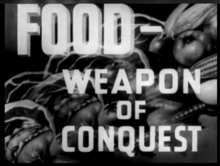 As we gather together for this Thanksgiving to enjoy good food and loving family and friends, we may wish to  take a long look around and take in this Thanksgiving for all its worth because this holiday may change forever as the divide in America takes the country beyond the point of no return.

The purpose of this article is to take a look at how the feast of today, could become the famine of tomorrow.

The Historical Precedent of Subjugating Through Starvation

Food can be withheld from the masses by preventing it from being grown and harvested, by contaminating it and rendering it unfit for human consumption or by simply preventing food from being distributed to a targeted population. The two most notable examples of dictators using food a weapon in order to destroy the free will of their people comes from the regimes of Stalin and Hitler. Josef Stalin engaged in his own Soviet style Holocaust when, in 1932 and 1933, and estimated six to 20 million people in the Ukraine died from starvation when Stalin implemented his prescription of “hope and change” policies in order to eliminate the Ukrainian’s desire for becoming their own nation-state. Upon assuming power, the Stalinist Communist regime rapidly nationalized the food industry and forced all of the region’s farms into collectives. Thus, Stalin’s version of the Holocaust came to fruition in what history has dubbed, the “Holdomor,” in which millions perished in only a two year period when the Soviet government began to exterminate the Ukrainian population by taking control of food and food production.

Hitler proclaimed that food could be used as a tool “…to discipline the masses” and he did not hesitate to use the control of food as a type of carrot and stick in which he would reward accomplishment and punish failure as well as to promote preferential class distinctions in which his armed forces received the largest food ration cards and this is exactlywhat happens in North Korea in 2017. Skilled workers who were engaged in industries critical to the building of the German war machine, received food ration cards which were slightly less in value. And, finally, the prisoners and the Jews received the lowest valued Nazi food ration cards. Food ration cards were also utilized as incentives to increase industrial production and were also increased in value when productive Nazi workers would be promoted. Food ration cards were diminished in value for the failure to meet Nazi production goals. Hitler’s use of what psychologists refer to as classical conditioning techniques reduced the will of the German population to a pack of Pavlovian dogs who were conditioned to be totally dependent upon the government for their survival.In recent times.

Most recently, Somalia thug, Farah Aideed, systematically starved his people into submission as a brutal civil war raged in both Darfur and Rwanda where the Islamic regimes sought the annihilation of ‘infidels’ and the use of food was one of the primary weapons designed to force compliance. And of course, Pol Pot, Castro and Mao all used food deprivation to quarantine their political opposition and exact absolute allegiance to their respective dictatorial regimes. After reviewing this brief history lesson, does any reasonable person not believe that the Deep State, who is losing control of the national narrative, through the failed impeachment efforts, willl not resort to these extreme measures? It is safe to say that the abovementioned dictators did not rule over countries that enjoyed a Thanksgiving feast similar to what you and I are enjoying in the present time.

The US Government and Its Mass Starvation Policies

It may surprise the readers to know that the use of food by the U.S. government has been a matter of official U.S. governmental covert policy since 1974-1975. In December, 1974, National Security Council directed by Henry Kissinger completed a classified study entitled, National Security Study Memorandum 200: Implications of Worldwide Population Growth for U.S. Security and Overseas Interests. The study was based upon the unproven claims that population growth in Lesser Developed Countries (LDC) constituted a serious risk to America’s national security.

In November 1975 President Ford, based upon the tenets of NSSM 200 outlined a classified plan to forcibly reduce population growth in “Lesser Developed Countries (LDC)” countries through birth control, war and famine. Ford’s new national security adviser, Brent Scowcroft, in conjunction with CIA  Director, George H. W. Bush, were tasked with implementing the plan and the secretaries of state, treasury, defense, and agriculture assisted in the implementation of these insane genocidal plans. NSSM 200 formally raised the question, “Would food be considered an instrument of national power here in the United States? … Is the U.S. prepared to accept food rationing to help people who can’t/won’t control their population growth?” Worse yet, could food be used a manipulative political tool within the United States? Kissinger has answered these questions when he stated that he was predicting a series of contrived famines, created by mandatory programs and this would make exclusive reliance on birth control programs unnecessary in order to control population, in this modern day application of eugenics in a scheme that would allow Henry to have his cake and eat it too in that the world would finally be rid of the “useless eaters!” The term “use eaters” is derived from the Fabian Socialist notion that if one consumes more than they produce, they should be exterminated. Subsequently, we should all be asking the following question:

With automation looming, and the demise of most occupation likely prior to 2030, should the American people be concerned about being labeled a bunch of useless eaters”?

Before you answer know, perhaps you might want to consider some other very salient factors.