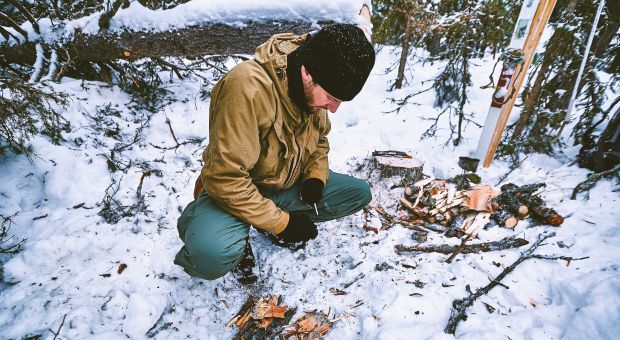 This article describes how we began our self-reliance path, and where we are now.

I am a retired career public safety employee with a secondary career of teaching disaster preparedness. My husband is in sales and has a past career in carpentry. We are both in our 60s and have four grown children. We were raised and still reside in Ohio.

THE MOVE TO THE FARM

When our children were still pre-adolescent we moved from a small city (50,000) to our present location. There was something within us that preferred a country setting even though we weren’t exactly living in downtown Los Angeles. So we purchased a home with just over 10 acres with an average sized house and lots of space outdoors.

Our land is mainly meadow/pasture with some wooded areas. It was because of this “pasture land” that caused us to consider (and eventually purchase) livestock. The land is beautiful but the soil composition is far from acceptable, mainly clay and shale. This makes gardening a challenge, but not an impossibility!

As I stated earlier we live in rural Ohio, only 40 miles from a large metropolis. On different occasions I have perused SurvivalRealty.com with thoughts of relocating to the American Redoubt. But then I realized that what I needed was not a change of scenery, it was a change of attitude!

Our “true neighbors” are friendly but non-intrusive, gardeners and gun owners. But our closest neighbors are actually in a home on our property. Several years after we moved to our farm, we invited my parents to build on a corner of our land. This was extremely beneficial for all involved. As my parents aged and needed assistance, we were only 100 steps away. And our children received the blessing of growing up with grandparent involvement.

This residence is now rented by a friend who is like minded in the area of preparedness/self-sufficiency. This is more of a blessing than you can imagine. His area of expertise is security (more on this later) where as mine is food and medical. He is a wonderful addition to our farm.

LESSONS LEARNED FROM OUR PROPERTY

I would describe myself as a modern day house wife of the 1950’s. I have not ventured far from the way in which I was raised. I enjoy cooking from scratch, sewing and repairing clothing, cleaning house, gardening, and preserving food.

My handyman husband is in sales but has a background as a carpenter. He can build or fix anything if it’s made of wood. He also handles electrical and mechanical with ease and competency.

We consider ourselves blessed beyond measure but in reality we are your basic middle class family trying to live within our means. Our lifestyle is thought to be miserly by some but we are frugal due to our “low debt tolerance”. We have learned throughout the years that “new” is not always better, and that “best” isn’t always needed. The last brand new vehicle we purchased was in 1986! But you would be wrong to think we are scrooges or that every dime we earn goes toward prepping. We take vacations, have family gatherings, live comfortably, and have been happily married for almost 35 years.

LESSONS LEARNED FROM OUR FAMILY/MARRIAGE:

We have always had extra food in the pantry and the freezer as well as being prepared for just about any emergency whether at home or away. But our journey into “hardcore” prepping began when I met a man through my second career as a disaster preparedness educator. He would ask me “what if…” questions and we would discuss different disaster scenarios. Then he mentioned the novel by William Forstchen, One Second After. I devoured the book.

It was as if my eyes were opened to the friviolousness of my previous prepping. I felt like a preschooler talking science with a professor from MIT. Looking back, we had unknowingly done what the professionals call a hazard risk analysis- we had prepped for the most likely of disasters, those being tornadoes and power outages. We were on the right path for disaster preparedness, just shortsighted in our planning. We needed to consider and plan for the possibility of long term grid down. Things were going to change.

I began with gardening. Remember how I said the soil was not suitable for growing vegetables? The past land owner had a spot where dirt had been brought in for a garden. I began growing vegetables. Some years I did well; some years the weeds won out. I realized that because of the location of the garden (it was over the hill and out of sight from the backyard) that I would often forget about it until the weeds were taller than the plants and the vegetables were nowhere to be found.

This problem was corrected by building some raised beds right outside of the back porch. Every year I add to their number and to the variety of vegetables I grow. The raised beds also seem less overwhelming when it comes to weeding. An author I read while researching raised beds suggested that you consider building your raised beds in the fall because you may be too busy in the spring. I found this to be true for us.

As the years passed, I began composting, building my own barrel composters from 55 gallon food grade drums. I still use the composting drums but sometimes I just throw the food scraps directly on the garden during the off season.

Several years ago I decided to buy a small (6×8’) greenhouse kit. My husband and daughter braved a cold April day to assemble it for me. Much to my embarrassment I haven’t used it to its full potential. It is more of a place of storage rather than a place of growth. I am trying to correct that this fall!

LESSONS LEARNED FROM OUR GARDEN:

The next logical step was to begin preserving food- either by canning (both water bath and pressure canning), dehydrating, vacuum sealing for the freezer(s), and/or buying in bulk.

I set up some shelves in the basement laundry area which became my extended pantry. I purchased how-to books on preserving food and equipment for the process. Most of the equipment was used- purchased from Craigslist or at auctions. When a friend heard I was learning how to dehydrate food and using a small plastic dehydrator, he gave me an extra Excalibur dehydrator that has a temperature gauge and lots of room. What a gift!

When I have extra cash I make a trip to purchase foods in bulk, generally at a nearby bulk food store. The foods I get here are things like flour, sugar (brown, white, and powdered), and pancake mixes. I had read that most people cannot grow enough wheat to provide the amount of flour their family will need. For this reason I buy flour in 50# bags. Before sealing the flour in food saver bags, I store the flour in the freezer for at least a week to kill any bugs that may be lurking. I was given an electric grain grinder and I purchased #10 cans of wheat berries for long term prepping. These have a 30 year shelf life.