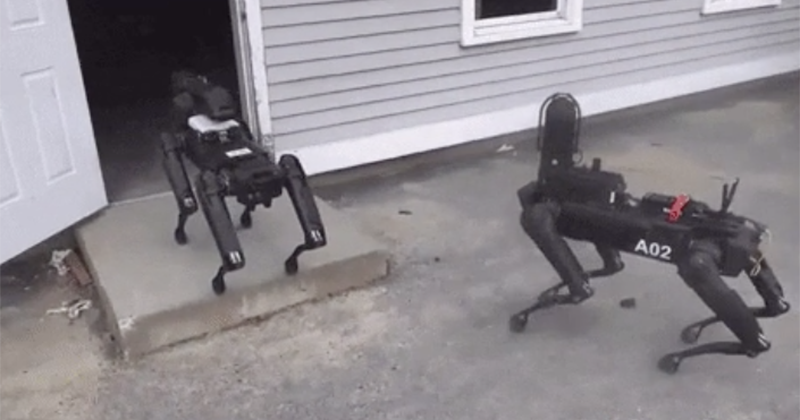 Massachusetts State Police have become the first law enforcement agency in the US to use robotic dogs, in a first that has critics warning that the machines could be weaponized in the future.

WBUR News reports that the metal dogs, made by Boston Dynamics, have been leased to the police and used on multiple occasions in active law enforcement incidents since August.

The robots, named ‘SPOT’, have been used as ‘mobile remote observation devices’ according to records obtained by the American Civil Liberties Union of Massachusetts.

Details on their use are scant, but the documents suggest that the dogs were used to provide troopers with images of suspicious devices or reveal where suspects were hiding.

Video of MA State Police testing the dogs shows one of the robots opening a door, mirroring footage released previously by Boston Dynamics.

Boston Dynamics vice president for business development Michael Perry confirmed that the machines were leased to law enforcement, with the provisio that the robot not be used in a way that would “physically harm or intimidate people.”

“Part of our early evaluation process with customers is making sure that we’re on the same page for the usage of the robot,” he said, adding “So upfront, we’re very clear with our customers that we don’t want the robot being used in a way that can physically harm somebody.”

The company routinely releases slick videos of the machines in action:

The AI on the dogs is open, so it can be customized, and the machines can be fitted with weapons. Along with the lease to law enforcement, that is enough for Kade Crockford, director of the technology for liberty program at the ACLU of Massachusetts to issue a warning.

“We just really don’t know enough about how the state police are using this,” Crockford said. “And the technology that can be used in concert with a robotic system like this is almost limitless in terms of what kinds of surveillance and potentially even weaponization operations may be allowed.”

“We really need some law and some regulation to establish a floor of protection to ensure that these systems can’t be misused or abused in the government’s hands,” Crockford said, adding “And no, a terms of service agreement is just insufficient.”