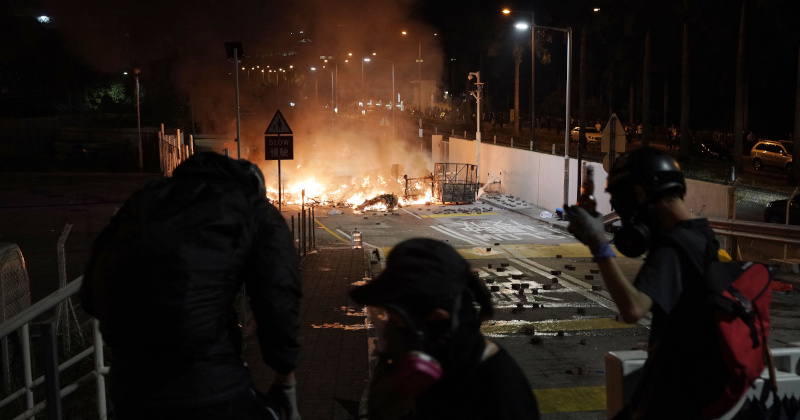 Authorities raised security levels on Wednesday around Hong Kong after a night of renewed violence.

Many of the clashes took place at university campuses, with a large number of students joining the anti-government protests, despite Chief Executive Carrie Lam urging students to obey the law.

Police confirmed on Wednesday that they had carried out a raid on the university campus amid fears that gasoline bombs were being produced there. “Nowhere in Hong Kong is a lawless land,” said police spokesman Tse Chun-chung.

Protesters stepped up their “blossom everywhere” campaign of road blocks and vandalism in an attempt to bring the city to its knees. During the Wednesday lunchtime rush hour over 1,000 demonstrators blocked roads in the heart of the city’s financial district. Many wore face masks in defiance of an ongoing ban.

Scores of riot police tried to disperse the crowds, beating some people. One police spokesman warned that the city was on the “brink of a total breakdown.”

Hong Kong Hospital Authority estimated on Wednesday morning that 81 people were injured in the preceding 24 hours. A man shot by police on Monday and another man set on fire by protesters both remain in critical condition.