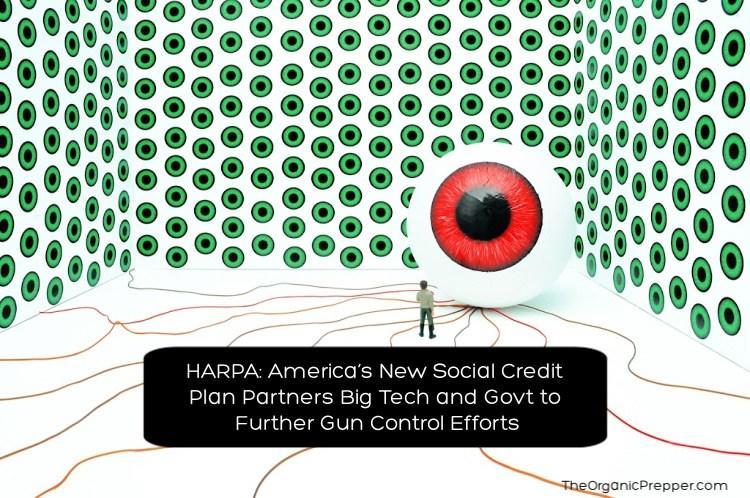 The Trump Administration is considering a very disturbing proposal that would use Big Tech companies including Facebook, Google, Amazon, and Apple to collect data on users who exhibit characteristics of mental illness that could lead to “violent behavior”.

Supporters see the plan as a way Trump could “move the ball forward” on gun control.

Naturally, a new federal agency will be created to implement this program. The push to create this new agency – called the Health Advanced Research Projects Agency or HARPA – began two years ago, reports The Washington Post:

“The concept was advanced by the Suzanne Wright Foundation and first discussed by officials on the Domestic Policy Council and senior White House staffers in June 2017. But the idea has gained momentum in the wake of the latest mass shootings that killed 31 people in one weekend in El Paso and Dayton, Ohio.

“The Suzanne Wright Foundation re-approached the administration last week and proposed that HARPA include a “Safe Home” — “Stopping Aberrant Fatal Events by Helping Overcome Mental Extremes” — project. Officials discussed the proposal at the White House last week, said two people familiar with the discussions. These people and others spoke on the condition of anonymity because of the sensitivity of the conversations.” (source)

Trump is reportedly a big fan of the HARPA proposal

HARPA would be part of the Health and Human Services Department. Its director would be appointed by Trump, and the agency would have a separate budget, according to The Post. The agency would be modeled on another controversial federal agency – DARPA.

“Coupled with “red flag” laws, this sounds like the beginning of a dystopian nightmare.

“You have give the people pushing HARPA credit for their ability to seize on tragedies in order to garner political support for their proposal. The HARPA plan apparently hadn’t really gained much traction since it was initially proposed in 2017. By focusing on gun violence, the supporters of HARPA may have found the political lever they needed to push their plan forward and get the agency created.

“The SAFE HOME plan sounds innocent enough, but it would create the foundation for further expansion of the U.S. surveillance state and accelerate the erosion of privacy rights.” (source)

Trump reportedly responded “very positively” to the proposal. “Every time this has been brought up inside the White House – even up to the presidential level – it’s been very well-received,” a person familiar with the discussions told The Post.

This project will cost taxpayers an outrageous sum

Oh, and this four-year project will cost taxpayers an estimated $40 million to $60 million.

I’d like to pause for a moment to remind everyone that the national debt is over $23 TRILLION and is rapidly climbing. Check out the US National Debt Clock (the figures are real-time) to see how much we pay in taxes, how much the government is spending (they are spending far more than they are stealing from us), and unfunded liabilities (kiss your retirement goodbye if you are years away from trying to collect).

All we need is more government spending, right? Collapse is already inevitable, and unnecessary programs that place more financial burden on taxpayers is going to hasten it.

The Post spoke to some people who have knowledge of the project. One of them is Geoffrey Ling, who is the lead scientific adviser on HARPA. Ling is also a founding director of DARPA’s Biological Technologies Office. He explained that the project will use “volunteer data” to identify “neurobehavioral signs” of “someone headed toward a violent explosive act”.

“Everybody would be a volunteer,” Ling said in an interview. “We’re not inventing new science here. We’re analyzing it so we can develop new approaches. This is going to have to be done using scientific rigor,” he said. (source)

Everybody would be a volunteer? What does Ling mean, exactly? The Post article does not clarify, but it does emphasize that the project would not collect an individual’s information without their permission.

By “permission” do they mean that because users generally agree to allow companies like Google and Apple to share their private information when they accept terms and conditions, HARPA would have access to your private data whether you want them to or not? Is this some kind of “permission by proxy” scam?

Here’s a bit more about what the proposal states:

“The idea is for the agency to develop a “sensor suite” using advanced artificial intelligence to try to identify changes in mental status that could make an individual more prone to violent behavior. The research would ultimately be opened to the public.

“HARPA would develop “breakthrough technologies with high specificity and sensitivity for early diagnosis of neuropsychiatric violence,” says a copy of the proposal. “A multi-modality solution, along with real-time data analytics, is needed to achieve such an accurate diagnosis.”

“The document goes on to list a number of widely used technologies it suggests could be employed to help collect data, including Apple Watches, Fitbits, Amazon Echo and Google Home. The document also mentions “powerful tools” collected by health-care provides like fMRIs, tractography and image analysis.

“Advanced analytical tools based on artificial intelligence and machine learning are rapidly improving and must be applied to the data,” states the document.

“Those familiar with the project stressed it would not collect sensitive health data about individuals without their permission. The government is simply trying to identify risk factors when it comes to mental health that could indicate violent behavior, they said.

“Privacy must be safeguarded. Profiling must be avoided. Data protection capabilities will be the cornerstone of this effort.” (source)