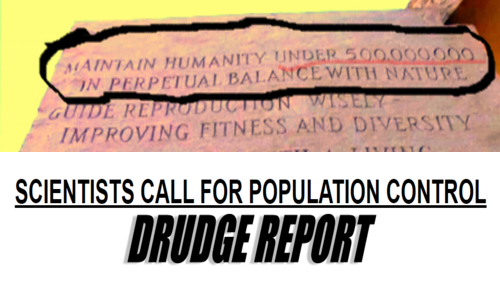 I must begin this story by informing you that Susan Duclos had another heart attack last night while in the hospital. They have moved her back to critical care and she will not be getting out today as hoped. Please join me in praying for a return to health for the most wonderful woman in the world. Thank you.

The lead story over at Matt Drudge’s much-less-visited-website (Drudge has lost 1/5 of his readers and 200 MILLION page views since turning on President Trump!) most of the day on Tuesday said it all.

Blaring loudly with the nearly 1″ tall center headline: “SCIENTISTS CALL FOR POPULATION CONTROL“, the story over at Yahoo News it linked to helped confirm the ‘globalists depopulation agenda‘ the independent media has been reporting upon for many years. According to 11,000+ radical leftist scientists, our planet Earth needs far fewer people if it is going to survive the so-called “climate emergency” it is now going through, warning the failure to do so will lead to ‘untold human suffering‘.

Although the ‘global depopulation agenda‘ of the ‘elites‘ has long been called ‘conspiracy theory‘ by the mainstream media, many believe that agenda is also enshrined in granite on the Georgia Guidestones, a monument erected in 1980 that contains a set of 10 different ‘guidelines‘ inscribed on the monument in 8 modern languages. And while at first, those ‘guidelines‘ sound benevolent, once you read the first one, you’ll see how sinister they are.

Starting with guideline #1, “Maintain humanity under 500,000,000 in perpetual balance with nature“, that statement sounds ok until you realize that currently, the Earth’s population is 7.7 billion people, meaning 7+ BILLION people will have to ‘go‘ for the globalists to reach that 500 million number on the Guidestones.

Called by this Wired story the “American Stonehenge: Monumental Instructions for the Post-Apocalypse“, as their story pointed out, some believe the ‘guidestones‘ are actually forecasting ‘the apocalypse‘. Though as one videographer warns us of the recent ‘population control‘ story in the final video at the bottom of this story, we may actually be being told what is about to come as he warns of a ‘grand purge‘ ahead. And as the Wired story points out in the excerpt we’ve republished below, great mystery surrounds this massive monument with no one really knowing who had them built or exactly why though as we’ll explore below, many believe they contain the ‘10 Commandments for World Government’ . First, from the Wired story.:

The Georgia Guidestones may be the most enigmatic monument in the US: huge slabs of granite, inscribed with directions for rebuilding civilization after the apocalypse. Only one man knows who created them—and he’s not talking.

The strangest monument in America looms over a barren knoll in northeastern Georgia. Five massive slabs of polished granite rise out of the earth in a star pattern. The rocks are each 16 feet tall, with four of them weighing more than 20 tons apiece. Together they support a 25,000-pound capstone. Approaching the edifice, it’s hard not to think immediately of England’s Stonehenge or possibly the ominous monolith from 2001: A Space Odyssey. Built in 1980, these pale gray rocks are quietly awaiting the end of the world as we know it.

Called the Georgia Guidestones, the monument is a mystery—nobody knows exactly who commissioned it or why. The only clues to its origin are on a nearby plaque on the ground—which gives the dimensions and explains a series of intricate notches and holes that correspond to the movements of the sun and stars—and the “guides” themselves, directives carved into the rocks. These instructions appear in eight languages ranging from English to Swahili and reflect a peculiar New Age ideology. Some are vaguely eugenic (guide reproduction wisely—improving fitness and diversity); others prescribe standard-issue hippie mysticism (prize truth—beauty—love—seeking harmony with the infinite).

What’s most widely agreed upon—based on the evidence available—is that the Guidestones are meant to instruct the dazed survivors of some impending apocalypse as they attempt to reconstitute civilization. Not everyone is comfortable with this notion. A few days before I visited, the stones had been splattered with polyurethane and spray-painted with graffiti, including slogans like “Death to the new world order.” This defacement was the first serious act of vandalism in the Guidestones’ history, but it was hardly the first objection to their existence. In fact, for more than three decades this uncanny structure in the heart of the Bible Belt has been generating responses that range from enchantment to horror. Supporters (notable among them Yoko Ono) have praised the messages as a stirring call to rational thinking, akin to Thomas Paine’s The Age of Reason. Opponents have attacked them as the Ten Commandments of the Antichrist.

Yet while ‘many people widely believe‘ the Guidestones are meant to instruct survivors of a future apocalypse, what survivors of an apocalypse are even going to see this monstrosity in sparsely populated Elbert County, Georgia? Certainly not the 99.999999% of ‘surviving Americans‘ who don’t live anywhere near Georgia; and certainly not the 100% of ‘survivors‘ around the world who live nowhere near the USA. So what are these ‘Guidestones‘ really about?

(ANP EMERGENCY FUNDRAISER! Following Susan’s recent heart attack, All News Pipeline is going to need financial help in the days, weeks and months ahead. Anything that you can do is greatly appreciated as we’re now facing an uphill battle ahead of us. Yet we WILL fight on! Thank you so much. Please consider donating to ANP to help keep us in this ‘Info-war’ for America at a time of systematic censorship and widespread US government corruption.)

In the final video at the bottom of this story, videographer ‘Vlad Gruetz‘ takes a long look at this new warning from scientists that there are too many people in the world, immediately warning us “they’re telling us what they’re about to do” as the globalists often do. Reading for us this story over at Bloomberg Quint titled “Earth Needs Fewer People To Beat The Climate Crisis“, our videographer warns that the globalists are likely preparing a massive ‘event‘ to ‘purge‘ as much of humanity as they can from the face of our planet via some kind of ‘manufactured event‘ whether that be nuclear war, an end-times pandemic, EMP, ‘economic armageddon‘ or whatever else the luciferians can think of and manufacture.

And as this new Zero Hedge story on this warning by scientists titled “11,000 Experts Propose Final Solution To Global Warming: Just Kill Billions Of People“ reports, these so-called ‘scientific experts‘ believe “the solution” to “global warming” is very simple: Fewer people! And as we see in the excerpt from their story below, these ‘scientists‘ were influenced to write their letter by the likes of ‘Extinction Rebellion‘ and other far-left folks who bought into the ‘global warming hoax‘ and have lived much of their lives in fear.

When absorbed in sequence, the charts lay out a devastating trend for planetary health. From meat consumption, greenhouse gas emissions and ice loss to sea-level rise and extreme weather events, they lay out a grim portrait of 40 years of squandered opportunities.

The scientists make specific calls for policymakers to quickly implement systemic change to energy, food, and economic policies. But they go one step further, into the politically fraught territory of population control. It “must be stabilized—and, ideally, gradually reduced—within a framework that ensures social integrity,” they write. -Bloomberg

“We are encouraged by a recent surge of concern,” reads the letter. “Governmental bodies are making climate emergency declarations. Schoolchildren are striking. Ecocide lawsuits are proceeding in the courts. Grassroots citizen movements are demanding change, and many countries, states and provinces, cities, and businesses are responding.

Perhaps world leaders will consult with China, which has reportedly been sterilizing Muslim women in their infamous reeducation camps.

There are 10 “commandments” engraved on the Georgia Guidestones/American Stonehenge in eight languages and in four ancient languages. These 10 commandments read as follows:

4. Rule passion – faith – tradition – and all things with tempered reason.

5. Protect people and nations with fair laws and just courts.

The most suspicious and peculiar fact that leads to most of the controversy of the 10 commandments left on the Georgia Guidestones or American Stonehenge is the knowledge behind such a finance operation and the fact that they worked so hard to remain anonymous. As well as the stones were designed and built to withstand a monumental amount of stress as if the financiers knew that either a cataclysmic event from outside this planet is upon us or that we may be bringing ourselves upon our own near destruction and they may have their hands in the events to come. Either way it is almost safe to say that the financiers of this project “knew” something we common folk do not.

A lot of people do not agree nor take what the commandments pose against them lightly that live in the area of Elbert County, GA where the monument stands. Quite often vandalism occurs on the stones in red paint that totes against the NWO, New World Order, as well as against the Rothschild banking cartel and against proponents for world government such as the U.N. Although security cameras have been added and security personnel can be found patrolling the monument from time to time vandalism still regularly occurs at the Georgia Guidestones and American Stonehenge.