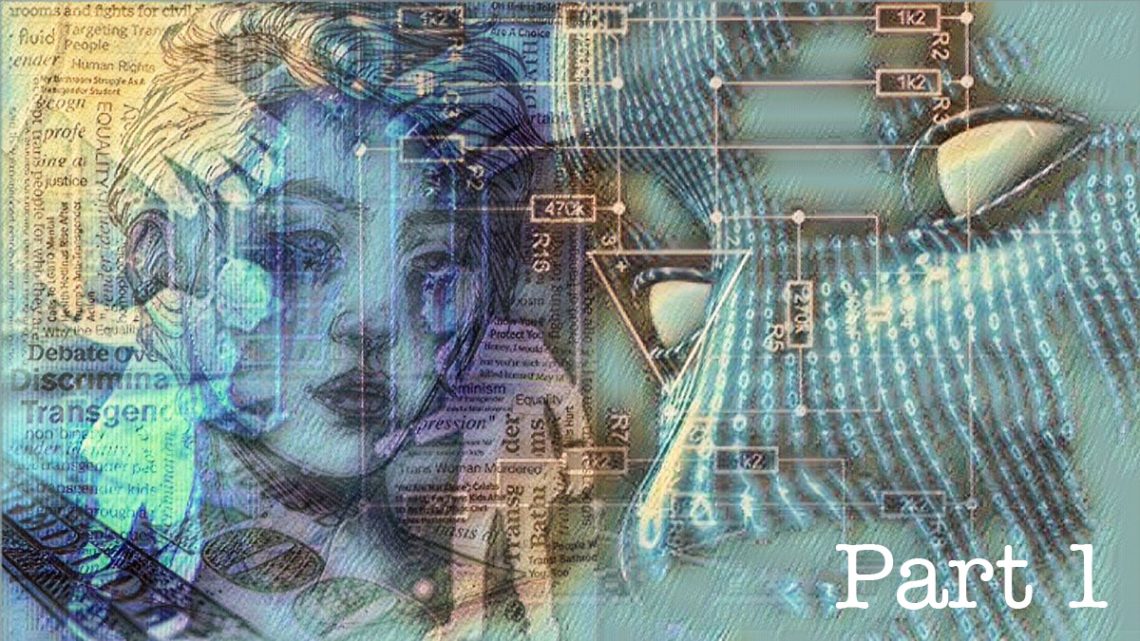 How do you build an industry? How do you market it and provide support backing up your marketing? How do you exploit a community, while creating a glamorized trend throughout society, stemming from chaos and confusion? How do you grow your margins and take it all the way to the bank? How do you do all of this, and still sleep at night? The exploitation and manufacturing of the transgender “industry” kicked off in the 1950s with a mix of social and medical engineering, with a moving target on children. The manufacturing of this industry goes far beyond anyone’s wildest imagination, and if you dare question it, it is discrimination. The real discriminators are those exploiting a community who truly suffer from trauma, depression, and an attempted suicide rate of 40 percent. They are the ones who should be angrier than anyone about the atrocities these people have committed. They are now exploiting your children, and they have taken this to dangerous extremes.

• A study by Johns Hopkins researchers shows “gender-affirming” surgeries have increased four-fold from 2000-2014.

• More than 40% of transgender people attempt suicide with a higher portion resulting after reassignment surgery, and the suicide rate is nineteen times higher than the general population.

• Less than 1% of the population identifies as transgender with 23% of them identifying as heterosexual.

• Only 4.5% of American adults identify as LGBTQ, yet teaching about these different sexualities and sex has already made it into state law in four states and counting, while seeding young children’s minds with the idea that switching genders is like choosing between an Almond Joy or a Snickers bar.

• There are over 25,000 adverse reports including 1500 deaths on Lupron products for puberty blockers, endometriosis, and prostate cancer. Manufactured by AbbVie, Lupron Depot-Ped is the number one prescribed puberty blocker, which is being used on children for early stages of gender transitioning, despite never having been approved by the FDA for that purpose.

Why are transgender people being glamorized, the idea of switching genders pushed upon children, and it’s all prohibited from being discussed or debated? The remaking of a population by creating mass confusion and chaos while dishing out puberty blockers as though it’s the next best Botox treatment, has avalanched into dangerous territory. Faster than one could daringly speak the incorrect pronoun, gender clinics are popping up across this country, surgeons are sharpening their scalpels, and money is pouring into this agenda. With the suicide rate of transgenders being nineteen times greater than the general population and a large percent of transitioned transgenders wishing they hadn’t done so, one wonders how this destructive agenda got its kickstart and who’s really benefiting from it. Certainly not those dealing with gender dysphoria.

Part one will take you through the timeline and origins of the social engineering used to create this industry. Part two will cover the medical engineering behind this, and the danger to children. Part three will get into those funding this agenda and those profiting from it. Part four will show how they have manufactured a reality, who’s assisted, and how it must be stopped.

Pivotal Moments & The Kickstart of Exploiting Transgenders to Manufacture an Industry

Though the first gay periodical dates back to 1896 in Berlin, the first pro-gay film was released in 1919, and the first gay bar in America was established in 1936, many transgenders are not gay. This isn’t about sexual desires, but rather sexual identity. The timeline below focuses on the transgender movement specifically.

1918
Magnus Hirschfeld, a German physician in Berlin, coined the term transvestite at his Institute for Sexual Science. He was the first to offer gender reassignment surgery. Much of his work was allegedly destroyed in 1933 when the Nazis burned books. In 1922, her performed a castration. He went into exile during Nazi Germany and his Berlin institute was destroyed.

1947
Biologist Dr. Alfred Kinsey founded the Institute for Sex Research at Indiana University, now known as the Kinsey Institute. He received his Ph.D. in biology from Harvard University. In 1948 his first volume of results by the ISR research team was published, called ‘Sexual Behavior in the Human Male,’ which became number two on the New York Times bestseller’s list.

1952 (Hollywood glamour kickstart phase 1: setting the stage for the pivotal push)
Christine Jorgensen was the first American to undergo a sex change operation, which was promptly featured in American national media in both The New York Times and the New York Daily News. She was glamorized and turned into an instant celebrity, who spent her life advocating for the transgender community, with Hollywood’s help. The operations were performed in Denmark, and vaginoplasty done in New York with the oversight of Harry Benjamin. (more on this below)

1962 (the push on children)
The first gender identity research clinic opened at UCLA. They worked with children and adults on conversion therapy but did not perform surgeries.

1963
Reed Erickson became a patient of Harry Benjamin to transition into an American transgender man, then in 1964 created a foundation to donate millions to promote transgender and gay equality, between 1964 and 1984. His foundation helped fund the creation of the Harry Benjamin Foundation and $72,000 funded Johns Hopkins Gender Identity Clinic between 1967 – 1973.

1965 (first US clinic to perform surgeries)
John Money and Claude Migeon quietly opened the Johns Hopkins Gender Identity Clinic, the first sex reassignment surgery clinic in America, which was later shut down in 1979 over controversy because some of the psychiatrists believed that the patients were not better off after surgery. Though, somewhere along the way, they began doing surgeries again under the name ‘Sex and Gender Clinic.’

1969 (setting the stage for a disorder in children)
Marshall and Tanner published the results of their study of 192 white British girls. They claimed that the average age of thelarche (onset of secondary breast development, whereas the initial growth occurs in fetal development) was eleven years and they defined “precocious puberty” in girls if this began before age eight. For boys, it’s if pubertal development occurs before age 9.

1969 (setting the stage of victimhood as a focal point for the future)
LGBTQ people rioted after police raided the Stonewall Inn in Greenwich Village in New York City. The Stonewall Inn was a gay bar that transvestites, transgenders, hustlers, and even homeless youth went to.

1970 (building the discrimination wall)
The first gay and lesbian pride parade in the world kicked off in Chicago, followed by a march in New York and parade in Los Angeles, priming the public for accepting what was to come down the road, while building up a case of discrimination along the way.

1971 (the medical push on children)
Discovery and synthesis of gonadotropin-releasing hormone (GnRH) by two research teams, Andrew Shally of the New Orleans Institute Laboratory, and Roger Guillemin from the Salk Institute in California. They devised analogs that led to a Nobel Prize in 1977. This is what is used for puberty blockers, under the guise of a “disorder,” so it could be used for transgender transitioning in the future.

1971
The University of Michigan established the first LGBT office.

1971
Richard Green was the founding 30-year-editor of ‘Archives of Sexual Behavior.’

1975
The Gender Dysphoria Clinic at Queen Victoria Hospital, Melbourne was established by Dr. Trudy Kennedy and Dr. Herbert Bower. Then, in 1979 the Victorian Transsexual Coalition and the Victorian Transsexual Association were formed, creating Australia’s first transgender rights and advocacy organizations. (The industry was simultaneously being built across the globe. This is just one example of many.)

1976 (pushing it into the education system)
First course in LGBT studies were taught at UCLA.

1979
The BBC put out a documentary about Julia Grant, a transgender woman, titled ‘A Change of Sex.’

1989 (creating medicine for a false need in children)
Patent for Supprelin was filed in May by The Salk Institute, which is a histrelin acetate injectable puberty blocker for children with “central precocious puberty.”

1991
Supprelin was approved by the FDA on December 24th as the first product of its kind. However, Johnson & Johnson’s were the pharmaceutical company selling it.

1993 (the political push)
Roberta Achtenberg became the first openly gay or lesbian person to be nominated by the president and confirmed by the U.S. Senate. She was appointed by President Bill Clinton. Though not transgender, this is included because both the Clintons and Obamas were cohorts in pushing the agenda full speed ahead.

1997 (Hollywood glamour kickstart phase 2)
Ellen DeGeneres came out on television as being gay. Though DeGeneres is not transgender, she became the Hollywood face of the gay community to push the LGBTQ agendas. It all connects.

1998 (discrimination push for future legislation)
The murder of transgender woman Rita Hester, lead to the ‘International Transgender Day of Remembrance,’ which began in 1999.

2000
Hillary Clinton became the First Lady to march in a LGBT pride parade.

2002 (the legislation push)
The Transgender Law Center was founded in California to fight for discrimination against transgender people, and alter laws and opinions.

2003
The National Center for Transgender Equality was founded in Washington D.C. by transgender activist Mara Keisling, focusing on policy advocacy and media activism.

2007 (the push for children to change genders, as young as 3-years-old)
The first youth gender clinic opened at Boston Children’s Hospital. They are a comprehensive general transitioning clinic for 3 to 25-year-olds. (more on this below)

2007
Supprelin-(R)-LA was approved by the FDA. Rather than being an injectable puberty blocker like their method designed in 1989, this is a subcutaneous implant that is inserted into the upper arm for a continuous release over a 12 month period.

2008 (backup support to alter children)
The Endocrine Society, with members in more than 100 countries, “approved” puberty suppressors as a treatment for transgender adolescents as young as 12 years old.

2011 (the push of laws to include LGBT in school’s for children)
California passed a law requiring schools to teach LGBT history, and began distributing LGBT-inclusive textbooks for K-8 in 2017.