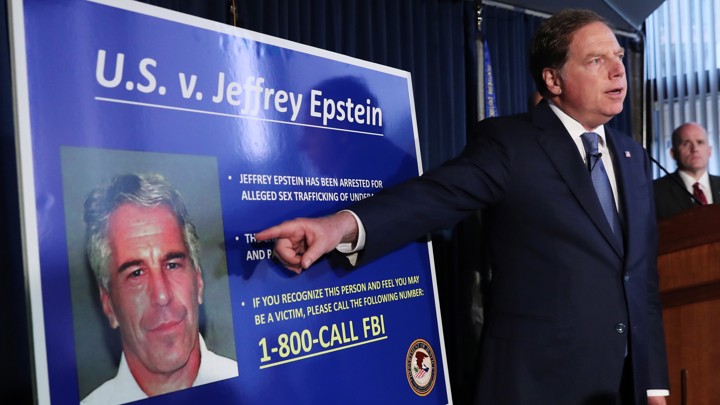 A number of Jewish-led media networks are working together to hunt down the whistleblower who provided a damning tape featuring ABC News anchor Amy Robach admitting to a conspiracy covering up the Jeffrey Epstein VIP pedophile ring. The video, which currently has 2.3 million views on Youtube, has enraged the public and further discredited the US oligarch-controlled media.

The pressure doesn’t seem to be getting to ABC’s Jewish president, James Goldston, whose company released an official statement claiming that the Epstein story did not have sufficient “corroborating evidence” and was not news worthy. The standards for running sex scandal stories are notoriously low at ABC, which has published a number of farfetched allegations against Brett Kavanaugh and Donald Trump.

The Zionist cabal involved in protecting Epstein – who has been exposed as having been working at the behest of Israeli intelligence since at least the 1980s – has been reduced to a paranoid dragnet intended to track the individual that released the ABC tape. CBS News’ Jewish president Susan Zirinsky recently fired 25-year-old Amy Bianco after ABC executives speculated that she might be the leaker. Bianco denies all of the allegations.

While the American media has actively stopped covering the Epstein scandal and his mysterious death, the questions continue to linger, with Project Veritas promising to publish more.

This is not the first elite pedophile scandal to rock a liberal democracy.

In 1996, hundreds of thousands of Belgian citizens protested and initiated a labor strike over their government’s handling of the Marc Dutroux case. The indignation over an obvious official coverup almost led to the overthrow of Belgium’s political order.

Dutroux, a convicted child rapist and killer, claimed publicly that he was merely an enforcer for a trans-national pedophile ring catering to powerful men.

Dutroux and his accomplice, the mysterious French-Jew Bernard Weinstein, had constructed an underground dungeon where they kept little girls they kidnapped.

After witnesses reported Dutroux’s license plate, police investigated his home and reported nothing of interest. The persistence of a judge, Jean-Marc Connerotte, led to a subsequent raid of the compound, which uncovered the underground lair where two live girls were found imprisoned, chained by the neck.

Connerotte brought to a light a number of allegations against one of Dutroux’s accomplices, a businessman named Jean Michel Nihoul. According to one victim, Nihoul would host sex parties for clients – ranging from judges to politicians – where they would rape, torture, and in some cases even murder children. Nihoul allegedly secretly filmed them all in the act.

Connerotte was later dismissed from the case by Belgian state officials, which angered the public. A few months later, a special police unit assembled to collect related testimony from other witnesses, including a young woman who described a party where a girl was tortured and murdered with details not known to the public, was also dismissed. Overseeing this case was

The judge has publicly decried Dutroux’s “powerful protectors” who not only knew of the criminal’s activity, but actively thwarted investigations into it. The heroic figure was the target of contract killings and endured organized attempts by the Belgian press, and politicians to discredit him. He fought a politically motivated police investigation accusing him of forgery and coerced testimony, but was found innocent. Connerotte’s replacement, Judge Langelois, threw out much of the relevant evidence collected and refused a motion to DNA test a hair found near one of the dead bodies dismissed as a Dutroux victim.

Documents exposed by the magistrate’s team prove full knowledge of Dutroux’s role in the rape and murder of two 8-year-old girls before his arrest, and that he was acting on behalf of “foreign traffickers” and a ring. Dutroux has claimed that he defied his overlords in keeping the two girls found for himself because he had grown attached to them.

Judge Van Espen, who was tasked with overseeing unsolved murders Dutroux and a number of witnesses have accused the pedophile network of, was later revealed to be a friend of Jean Michel Nihoul, which he never disclosed and did not recuse himself despite the conflict of interest.

At this point, the Belgian public and families of those raped and killed have completely given up on ever getting the truth amidst such vast web of official corruption.

In 1984, MP Geoffrey Dickens gave a speech denouncing a homosexual pedophile network infiltrated deep into the heart of the British government, business establishment, the Church of England, pop icons and the Royal House.