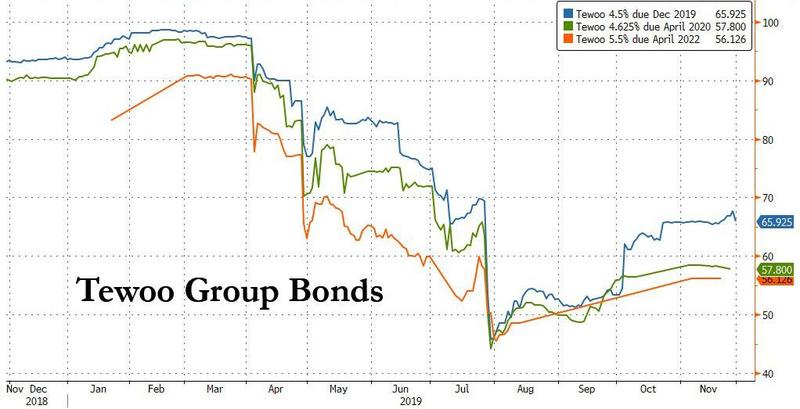 Something is seriously starting to break in China’s financial system.

Three days after we described the self-destructive doom loop that is tearing apart China’s smaller banks,  where a second bank run took place in just two weeks – an unprecedented event for a country where until earlier this year not a single bank was allowed to fail publicly and has now had no less than five bank  high profile nationalizations/bailouts/runs so far this year – the Chinese bond market is bracing itself for an unprecedented shock: a major, Fortune 500 Chinese commodity trader is poised to become the biggest and highest profile state-owned enterprise to default in the dollar bond market in over two decades.

In what Bloomberg dubbed the latest sign that Beijing is more willing to allow failures in the politically sensitive SOE sector – either that, or China is simply no longer able to control the spillovers from its cracking $40 trillion financial system – commodity trader Tewoo Group  – the largest state-owned enterprise in China’s Tianjin province – has offered an “unprecedented” debt restructuring plan that entails deep losses for investors or a swap for new bonds with significantly lower returns.

Tewoo Group is a SOE conglomerate, owned by the local government and operates in a number of industries including infrastructure, logistics, mining, autos and ports, according to its website. It also operates in multiples countries including the U.S., Germany, Japan and Singapore. The company ranked 132 in 2018’s Fortune Global 500 list, higher than many other Chinese conglomerates including service carrier China Telecommunications and financial titan Citic Group. Even more notable are the company’s financials: it had an annual revenue of $66.6 billion, profits of about $122 million, assets worth $38.3 billion, and more than 17,000 employees as of 2017, according to Fortune’s website.

The state-owned company is neither publicly listed nor rated by the top three international ratings companies, although it does have publicly traded bonds whose performance in recent months has been nothing short of terrifying for anyone who thought purchasing a company explicitly backed by Beijing can never fail.

As one can deduce from the above chart, the first time Tewoo Group’s financial difficulties emerged was in April when it sought debt extension from its lenders on its offshore, dollar bonds and sold copper below market rates amid a cash crunch. At that time, Fitch Ratings – the only rating agency to appraise the company’s credit standing – slashed the company’s credit score first from BBB to BBB- on April 18, and then by a whopping six notches, from BBB – to B- on April 29, to reflect its weak liquidity and higher-than-expected leverage.

According to Bloomberg the company has proposed an exchange/tender offer on the three dollar bonds due to mature over the next three years, as well as a perpetual note. What makes what would otherwise be a mundane exchange offer in the US, is that this is the first ever distressed plan of its kind from a state-owned Chinese firm.

What is just as striking is that the Tewoo Group – with its $66 billion in revenues and $38 billion in assets – is likely to default on its $300 million dollar bond due Dec. 16, a Bloomberg source said, unless the exchange is consummated. This means that the company’s bondholders have just a few weeks to decide between either taking as much as 64% in losses or accepting delayed repayment with sharply reduced coupons on $1.25 billion of dollar bonds, something which the rating agencies will describe as an event of default.

A de facto default by Tewoo would be considered a “landmark case,” said Cindy Huang, an analyst at S&P Global Ratings. Central government support for SOEs is likely to be selective in the future, while local government aid will be limited by the slowing economy and weaker fiscal position, she said.

The “distressed exchange offer” comes after Tewoo Group said last week it would be unable to pay interest on a $500 million bond, prompting Industrial & Commercial Bank of China to transfer $7.875 million to bondholders on its behalf. ICBC provided a standby letter of credit on the note – a pledge to repay if the borrower can’t. However, the firm’s remaining $1.6 billion of dollar bonds lack such protection.

Worse, Tewoo Group is already in effective default after some of its units previously missed local debt payments – in July, Tianjin Hopetone missed a coupon payment on its 1.21 billion yuan note sending the company’s dollar bonds tumbling below 50 cents on the dollar, while Tianjin Haoying Industry & Trade missed a loan interest payment due in June. Also in July, rating agency Fitch – which somehow missed all of this when it was rating the company investment grade – withdrew its rating on Tewoo Group due to insufficient information to maintain the ratings. It last rated the issuer at B-.

And as furious bondholders scramble to demand an explanation how a state-owned enterprise can default, Beijing is already bracing for the inevitable next steps: earlier this month, Tianjin State-owned Capital Investment and Management, an entity wholly-owned by the Tianjin municipal government, was appointed to manage the company’s offshore debt. For now, the entity has no plan to hold controlling stakes in Tewoo Group, although that will likely change as soon as the company’s financial situation fails to improve. Meanwhile, Tewoo Group said it plans to take a series of debt management measures, by which we assume it means it will restructure its debt.

The fact that a state owned enterprise such as Tewoo has just days before it defaults, in either a prepack or “freefall” form, suggests that Beijing will no longer bail out troubled SOEs, let alone private firms, perhaps due to the strains imposed by the economy which is slowing the most in three decades. It also raises concerns over Tianjin, where it’s based, following a series of rating downgrades and financing difficulties suffered by some of the city’s state-run firms. The metropolis near Beijing also has the highest ratio of local government financing vehicle bonds to GDP in China.

In short, if there a glitch with Tewoo’s default, the Chinese dominoes could start really falling.

Since the first SOE bond default emerged in China’s domestic market four years ago, 22 such firms have failed to make good on a combined 48.4 billion yuan ($6.9 billion) onshore bonds as of the end of October, according to Guosheng Securities. However, as Bloomberg adds, despite periodic scares such as late repayment, Chinese SOEs have yet to suffer any high-profile default in the dollar bond market since the collapse of Guangdong International Trust and Investment Corp. in 1998.

Tewoo would be precisely that high-profile default.