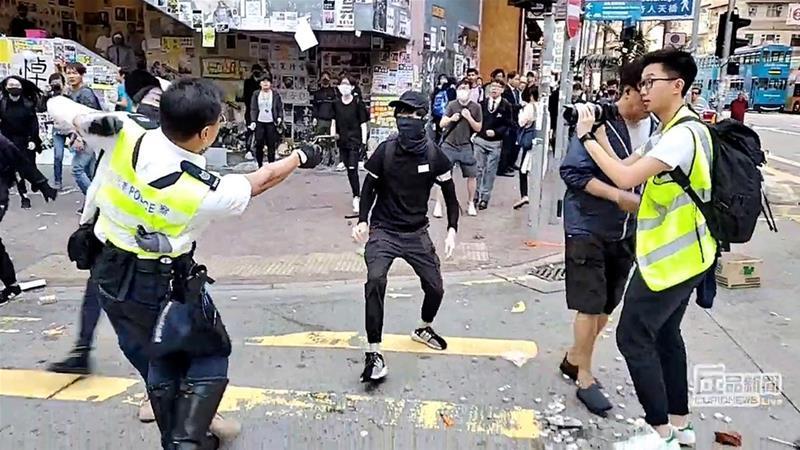 Hong Kong police opened fire and hit at least one protester on Monday according to multiple news sources, as chaos erupted across the city a day after officers fired tear gas to break up demonstrations that are entering their sixth month.

Police fired live rounds at protesters on the eastern side of Hong Kong island, and local Cable TV said one protester was wounded when police opened fire.  Video footage showed a protester lying in a pool of blood with his eyes wide open. Police also pepper-sprayed and subdued a woman nearby as plastic crates were thrown at officers, the video shared on social media showed.

A longer clip of the shooting is below. Reader discretion advised.

The shot protester is said in critical condition, according to CableTB.

Riot police soon appeared after the shooting,  helping the traffic officers subdue the protesters according to RTHK. Angry people started demanding explanations for the shooting, but were pepper sprayed by riot police. A woman who continued to confront the officers was thrown to the ground, then subdued, as the enraged crowd threw objects at the officers and cursed them.

An ambulance arrived around six minutes after the shooting, by which time the first man who was shot appeared to be barely moving, lying in a pool of blood. The camera operator was by this time sobbing as he recounted the shooting to his audience.

Following the shooting, police cordoned off the area, but a large crowd of many hundreds of people quickly gathered at the intersection, yelling abuse at the officers, many of them extremely emotional. Police ordered them to leave immediately, only to be ignored. Officers then used pepper spray on the crowd. Some then left, and officers rushed forward to arrest a few of them.

Police issued a statement saying that radical protesters had set up barricades at multiple locations across the city and warned the demonstrators to “stop their illegal acts immediately.” They did not comment immediately on the apparent shooting.

Services on some train and subway lines were alsodisrupted early on Monday, with riot police deployed near stations and shopping malls. Many universities cancelled classes on Monday and there were long traffic jams in some areas.