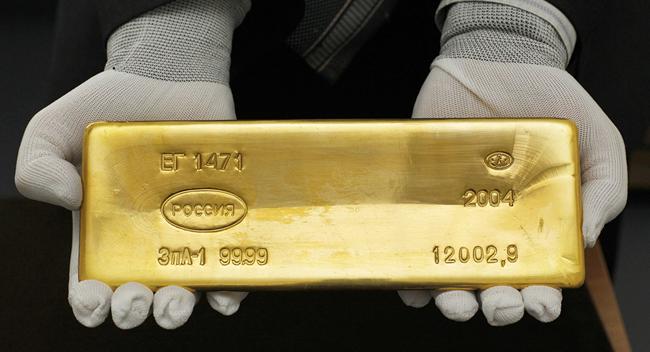 When we last looked at Danske Bank, the Danish lender was at the center of what has been dubbed the world’s largest, $220 billion money-laundering scandal that allegedly involved Russians transferring funds offshore in violation of European regulations (it also involved the chronically criminal Deutsche Bank). Then, two months ago, the scandal took a lethal turn when the CEO of the bank’s Estonia branch was found dead in a still-unexplained suicide. Now, we learn of yet another bizarre twist in what some have dubbed the biggest dirty money scandal of all time: the Danish lender was offering gold bars to wealthy clients to help them keep their fortunes hidden.

According to Bloomberg, the bank’s Estonian branch – whose CEO committed suicide – which was already wiring billions of client dollars to offshore accounts, told a select group of mostly Russian customers some time around 2012, that they could now also convert their money into gold bars and coins.

So for those asking the benefits of holding money in physical gold instead of fiat (or crypto), here is the answer: aside from offering a hedge against risk, Danske presented gold as a way for clients to achieve “anonymity,” according to the documents. More importantly, the bank said that using gold ensured “portability” of assets, according to an internal presentation dated June 2012.

As one would expect, the gold/money-laundering service did not come cheap: Danske charged a fee of 0.5% on larger orders, while smaller orders had a commission of as much as 4%.

This is the first time we learn that Danske offered such “services” – in the bank’s own report on its non-resident unit, the bank listed the services it provided to clients. Aside from payments, these included setting up foreign-exchange lines, as well as bond and securities trading. The bank didn’t list the sale of gold bars.

While it’s not known how much gold Danske managed to sell while the now defunct Estonian unit was still running, an internal email seen by Bloomberg revealed that at least some clients used the service. Local private banking clients were also offered the service.

Furthermore, for gold bars weighing 250 grams or more, Danske clients could obtain the precious metal without a sealed pack or paper certificates. Bloomberg adds that anti-money laundering approval was needed before customers could collect the gold, but such approvals weren’t necessary if the gold was kept in long-term storage, according to the documents.

The report goes on to note that the alleged “gold laundering” service – somewhat similar to the Turkey-Dubai-Iran PetroGold Triangle that emerged in 2012 as a means by which Iran evaded the Western blockade – was no longer offered after 2013, when the price of gold tumbled. A bank presentation dated from June 2012, when gold was trading close to an all-time high, told clients that “the product is not being advertised publicly or in the media.”

Additional documents revealed that Danske’s Estonian branch sourced its gold from two partners, depending on the size of orders. One partner handled orders that exceeded 300,000 euros, equivalent to 6 kilograms at the time, and bought the gold from the Austrian mint; the other was used for smaller orders, according to the presentation, which didn’t name the suppliers.

Some of the documents promoting gold bars are signed by Howard Wilkinson, the whistleblower who brought the Danske Bank laundering scandal into the public light. His lawyer, Stephen Kohn, didn’t immediately comment on the matter when contacted by Bloomberg.