Top executives at ABC are ‘freaking out’ amid a probe into who leaked a hot mic video where Amy Robach is seen ranting that the network spiked a Jeffrey Epstein story, an insider has claimed.

The source claims ABC has searched emails and news logs in a bid to find the culprit and has been isolating and encouraging staff to turn against each other amid their investigation.

Confusion surrounds a letter published after former ABC News producer Ashley Bianco, 25, was ‘wrongly accused’ and fired from CBS, in which the author admitted they sent the tape to Project Veritas and was mysteriously signed off ‘Ignotus’.

Ignotus means ‘unknown’ in Latin but is also the name of a wizard that has an invisibility cloak in the Harry Potter franchise. 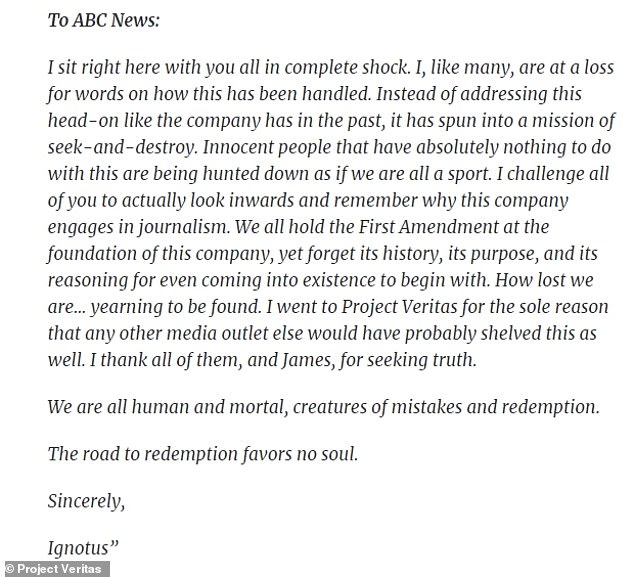 ‘Ignotus’ means ‘unknown’ in Latin and the source asked about the letter: ‘How many young producers speak Latin these days?’

‘They are freaking out over the Harry Potter reference,’ the ABC insider told Page Six. ‘Does this mean the leaker is a Potter fan, likely one of the younger staff members who work the overnight shift? Or is the leaker citing Latin, which means he or she could be an older member of staff. I mean, how many young producers speak Latin these days?’

Page Six reports the source as saying the company has been ‘isolating certain employees and putting them under pressure to turn on their colleagues’ regarding the footage from the Good Morning America anchor while she was not on air.

Robach said ABC didn’t let the story go to air because the palace threatened to sue the network and there were concerns Prince William and Kate Middleton would no longer grant ABC any interviews.

There has been a good deal of backlash against ABC ever since the video first emerged, with many people pointing out that none of the network’s news programs have mentioned the story.