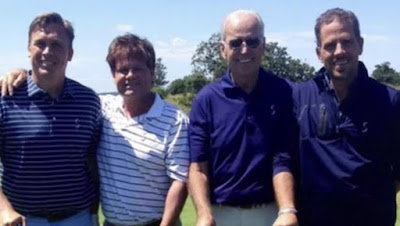 Make no mistake, Democrats and the Deep State bureaucracy have sought to negate the results of the 2016 election even before Donald Trump was inaugurated into office. And when the Russiagate Hoax failed following the release of the Mueller Report, House Democrats began feverishly looking for their next Quixotic windmill to use to try to impeach the President.

But perhaps what many like Pelosi, Schiff, and Biden did not plan for was the ouster of their Ukrainian puppet Petro Poroshenko, who had helped facilitate schemes that enriched these politicians with fraudulent jobs for their children, and cash contributions for their coffers.

Joe Biden:Among the documents, as Fox News reported Wednesday, are notes from an interview Trump attorney Giuliani conducted with fired Ukrainian prosecutor Viktor Shokin earlier this year, in which he claimed he was told by former U.S. Ambassador to Ukraine Geoffrey R. Pyatt to back off an investigation involving that firm, Burisma Holdings, and its founder. According to interview notes, Shokin claimed Pyatt — currently the ambassador to Greece — told him to handle that investigation “with white gloves.” In that interview, Shokin also claimed that former Ukrainian President Petro Poroshenko told him he should not investigate Burisma, “as it was not in the interest of Joe and/or Hunter Biden.” Shokin claimed Poroshenko told him that due to his investigation, Joe Biden held “up to one billion dollars in U.S. aid to Ukraine.” Poroshenko eventually removed Shokin. – Fox News

In  2013, Pasternak hosted a fundraiser in Washington for Schiff, who later came to embrace a strong stance in support of the United States sending military aid to Ukraine during its conflict with Russia. “Before this time, Schiff rarely, if ever, mentioned Ukraine,” Fox News’ Laura Ingraham said on her show Thursday night, after detailing Schiff’s connection to Pasternak. “But after the fundraiser, he used multiple television appearances to basically demand that we send money and arms to them.” – Fox News

House Speaker Nancy Pelosi’s son Paul Pelosi Jr. visited Ukraine in 2017 to meet with government officials in connection to a business initiative. Now, unearthed records reveal that Paul Pelosi Jr. was an executive of a gas industry company that did business in Ukraine – and his mother Nancy Pelosi was featured in one of the company’s promotional videos. – National File

Then of course there is Paul Manafort, who following his conviction for acting as a foreign agent to and with Ukrainian oligarchs was outed as a Democratic operative working within the Trump campaign.Ironically it appears that President Trump is the only politician actually following the law when it comes to Ukraine and his seeking their assistance in investigating corruption of American agents.  And that is because the American people do not know of, and the Democrats have conveniently forgotten, that in 1999 President Bill Clinton established an agreement between the US and Ukraine to aid one another in any and all criminal investigations, meaning everything Trump did in his phone calls and discussions was completely and utterly above board.

IS MICHAEL BLOOMBERG SLATED TO BE THE DEMOCRATIC PARTY’S NOMINEE?