Back on September 30th, establishment windbag the Washington Post put out this story titled “President Pelosi? It Could Happen” within which they laid out their fantasy of how a ‘Nancy Pelosi Presidency‘ might happen and while such a scenario might sound incredibly far-fetched, America came very close to having a ‘President Carl Albert‘ in the early 1970’s in the scenario the Washington Post is daydreaming about.

Albert, the Democrat Speaker of the House during the Nixon administration, became next in line to the Presidency following the resignation of Nixon’s VP Spiro Agnew and if Gerald Ford hadn’t have been approved to be VP by the time Nixon resigned or was removed from office, Albert would have taken over the highest office in the land.

As this entry for Albert over at Wikipedia points out, as Speaker of the House, Albert presided over the only body with the authority to impeach Nixon and had the ability to prevent any Vice Presidential confirmation vote from taking place in the House. This meant Albert could have maneuvered to make himself Acting President.

And while Albert showed some political ‘class‘ by concluding that, as a Democrat, he had no right to inherit a presidency that had been won by a Republican ticket in 1972, does ANYBODY reading this really believe that Nancy Pelosi would do the same in 2019/2020 should a similar scenario arise here? As the Wikipedia entry for Albert also pointed out, Albert later said that if he had become Acting President by succession that it would be in the national interest for him to resign immediately after the House and Senate had confirmed a Republican Vice President. Things have sure changed a lot in almost 50 years, huh?

Democrats who have been frothing at the mouth to get President Trump removed from office ever since he was voted in by ‘the sea of red‘ Susan Duclos reported on in this October 2nd ANP story could learn a great lesson from Albert yet they push and push the Russian collusion hoax and impeachment coup attempt and as the excerpt below from this previously mentioned Washington Post story proves, they’re still ‘dreaming on‘.:

What happens when a Democratic speaker of the House — second in line to the presidency, according to the Presidential Succession Act of 1947 — is suddenly thrust into the Oval Office, succeeding a Republican president and vice president who resign, embroiled in scandal?

Such a scenario is attracting attention — #PresidentPelosi was trending on social media after last week’s announcement of an impeachment inquiry — even though it may seem far-fetched that President Trump and Vice President Pence would be forced from office over abuse of power related to the administration’s dealings with Ukraine or other misdeeds.

Their story concluded that a secret, 19-page memorandum written by Ted Sorenson, a close advisor of President John F. Kennedy, would provide the ‘road map‘ to take down President Trump and ‘restore dignity‘ to America’s highest office. As if a ‘President Nancy Pelosi‘ could come even close to accomplishing that! The Post’s conclusion.:

No matter who succeeds this president, or when, the Sorensen memo is a road map to restoring the dignity, integrity and basic function of the nation’s highest office. The chaos created by the current occupant’s heedless, indulgent and volatile leadership — if it can be considered “leadership” — calls for attention to the national interest and preparation to avoid the kinds of hasty, unwise judgments and actions that can result in catastrophic mistakes. Although from another time, the Sorensen memo offers sage counsel for undertaking such preparations and a plan to steady our careening country and get it back on track.

So we’ll be taking a look within the rest of this story at the still ongoing coup attempt upon President Trump and what he might do about it as Commander in Chief while also looking at a call from a retired US Admiral for President Trump to be ‘removed‘ from office, “the sooner the better” in his words. We’ll also look below at an eerie new alert from the website of Steve Quayle from one of his readers who recently had a dream in which he bizarrely met a man by the name of ‘Carl Albert‘ at a place he remembered from the dream was called ‘Raven Rock‘. In reality, ‘Raven Rock‘ is where the US government will go to save itself at ‘the end of the world‘. 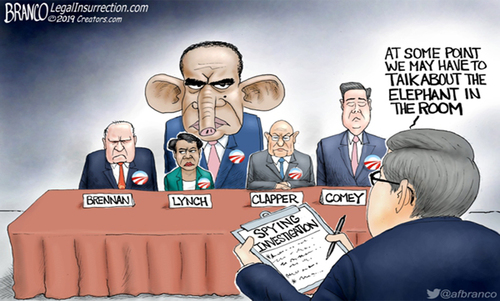 Back on May 21st, we published a story on ANP titled “In The Deep State Coup Attempt, All Roads Lead Back To Barack Obama – Watch Out For A Major Breakout Of Leftist Insanity Should Deep State Crooks Fall“ within which we reported that according to the Daily Caller, sources told them that President Trump was eventually going to invoke the Insurrection Act to deal with illegal immigration.

As the Daily Caller story reported, under the Insurrection Act of 1807, the president has the authority to use the National Guard and military in order to combat “unlawful obstruction or rebellion” within U.S. borders. Last invoked back in 1992 by George H.W. Bush to quell the Los Angeles riots, might President Trump invoke it to take down the seditious and treasonous coup attempt against him? As Mike Adams tells us in the 1st video at the bottom of this story, it’s way past time for those who’ve attempted to take down America’s legally elected President to be held accountable for their crimes of treason against America.

With Retired Admiral William McRaven, a Hillary Clinton fan, publishing an op-ed in Friday’s New York Times titled  “Our Republic Is Under Attack From the President” within which he argued that President Trump must be removed from office and “the sooner the better” hinting that things could turn terribly ugly in the days and weeks ahead, as Breitbart reports in this story, McRaven’s op-ed gives a military imprimatur to what President Donald Trump has already likened to a “coup.”

And we find it interesting that the Admiral who is basically calling for a ‘military coup‘ against President Trump is named ‘McRAVEN‘, especially when we take a look at the SQalert below sharing a dream that was on Steve Quayle’s website, and especially considering the ‘political war‘ now going on in America. While we normally don’t publish ‘dreams‘ on ANP, we’ve decided to go ahead and run with this one seeing the strange coincidences, with even psychologists saying dreams can sometimes be precognitive warnings.

As we see in this ‘dream‘, Site ‘R‘, Raven Rock, is the underground contininuity of government location that high ranking US government employees will be evacuated to in case of a major emergency such as nuclear war. From Steve Quayle’s website.:

LOOKS LIKE THIS DETAILED DREAM, THAT GOD IS WARNING THROUGH IT OF EVACUATION TO SITE R AND THAT IT WILL BE DURING SOME FORMAL EVENT OR OCCASION THAT THE EVENT TAKES PLACE AS IT IS ABOUT TO HAPPEN, PRELUDE TO NUKES FLYING!

Hi Steve, I want to share something that happened to me the other night. First off I rarely dream or if I do I almost never remember any of them. About a week ago I suddenly and frightenedly woke from what seemed like a real life scenario. So much so, I could see the detail in the mens suits and womens clothing, the rooms, tables and other such notes.

I found myself in Washington D.C. and somehow knew I was some type of aide or Paige for a prominent politician but I wasnt sure who. I was told by his wife we would meet her husband later at a dinner but then as we were being driven to this dinner meeting somewhere in D.C. the driver was warned by this women that we needed to go to a place immediately called raven rock. She seemed to be very upset from a communication she had received and she was telling the driver to hurry and get us to raven rock without delay and even told him to take a road which was separate from the one her husband and the men would take.

I remember entering a curving road that went through a tunnel taking us to this place she spoke of. As we entered an underground parking garage, everyone was walking in dresses, pant suits and mens suits, up a concrete walkway that doubled back on its self as we made our way up. I can so clearly remember the exact way people were dressed down to their shoes and colors of outfits. As we we walking up this concrete ramp way, people were arguing with one another saying that some of them were directly responsible for what was about to happen and how they couldnt believe they were having to go to this underground place for safety. People were angry with each other and kept shaking their heads in disbelief.

As we entered what looked like a huge cafeteria/dining area, the women told me that her husband was also on his way to where we were and would arrive shortly and I would finally be meeting him in person. I got separated from her (the woman who was showing me around DC and also this new underground area), when suddenly realized I now didnt know what table I was supposed to go to find her. As I was gazing out over the tables of people, a man approached me and said hello I’m Carl Albert, its time we finally met. But I assure you when I was the Speaker of the House, it was nothing like it is now. There is no way this would have been going on or happened when I was in charge am I’m embarrassed for what has happened now. As I was looking at him talk to me, I could see through him kind of, and knew he wasnt still alive.

The next morning as I was recalling this vivid life like dream to my wife, she looked up the name Carl Albert. She told me he actually was Speaker of the House in the early 70s I believe. Steve, I would have been in jr. high or high school back then, and never knew who he was or that he was a speaker of the house, let alone follow politics back then! Im not sure what my dream means but it freaked both my wife and I out and I have had a very uneasy feeling that something is wrong since that dream. Thought it might be something I should pass along as that never happens to me and feel it was some type of warning.—DescriptionThe Raven Rock Mountain Complex, also known as Site R.