While the lead story over at the Daily Mail for much of the day on Wednesday reports upon the death of Jeffrey Epstein and what pathologist Dr. Michael Baden claims were very clear signs that the pedophile had been murdered and didn’t commit suicide as was originally reported, adding another layer of mystery and intrigue to the still-ongoing ‘Clinton body count‘, independent news ‘guerilla journalists We Are Change‘ recently snuck onto Epstein’s Little St. James Island where they recorded the island in high definition as seen in the 1st video at the bottom of this story.

Exploring a series of satanic monuments as well as the very strange ‘temple‘ that has been seen in many pictures since Epstein’s death, they also had interviewed locals who said that everybody knew what was going on at that island with a series of very young girls being taken to it regularly over a long period of time. And as Luke Rudkowski of We Are Change warns within his video, with the US government helping to cover up Epstein’s behavior for over 20 years, Americans really can’t trust anything ‘officials‘ say about Epstein and his death, either, especially with Bill and Hillary Clinton’s long ties to the monster largely censored by the mainstream media.

And as Luke also points out in this video, with Bill and Hillary Clinton’s long ties to Epstein, and with the Clintons having much to do with the shape of the US Department of Justice and the ‘deep state‘ over the past  several decades with Bill as President for 8 years and Hillary as head of the Department of State, it’s really no suprise that ‘Justice‘ in America has been completely warped.

With some arguing that the US government and the DOJ had made one of their primary missions “the protection of the ‘Clinton crime family'” over the past several decades, with one Clinton scandal and crime after another completely ignored by the DOJ, we’re happy to report that President Donald Trump and the White House recently issued this Executive Order titled “Executive Order on the Commission on Law Enforcement and the Administration of Justice“ within which one section will address: refusals by State and local prosecutors to enforce laws or prosecute categories of crimes.

A great question on many minds on that last point might be, “why is the ‘Clinton crime family’ still walking free despite a laundry list of crimes and dead bodies that would have landed any other American in jail for decades?” Stretching back at least as far as 1987 and the Mena, Arkansas deaths of teenage boys Kevin Ives and Don Henry who allegedly witnessed Clinton-tied drug smuggling at the Mena Airport, that string of unusual and mysterious deaths has lived on for over 30 years now, totally covered up by ‘the powers that be‘.

So with Jeffrey Epstein’s ‘death‘ now looking more and more like murder than suicide according to one of the world’s top pathologists who has examined over 20,000 dead bodies over 50 years, and someone tied to the Clinton’s/deep state the ‘most likely suspect‘ in Epstein’s strangulation death, we’ll be taking a look within this story at the very long trail of suspicious deaths that follow the Clinton’s wherever they go as well as signs that those deaths are another sign America has become a ‘banana republic‘ with people like the Clinton’s able to ‘murder at will‘, pushing our nation even closer to outright tyranny. 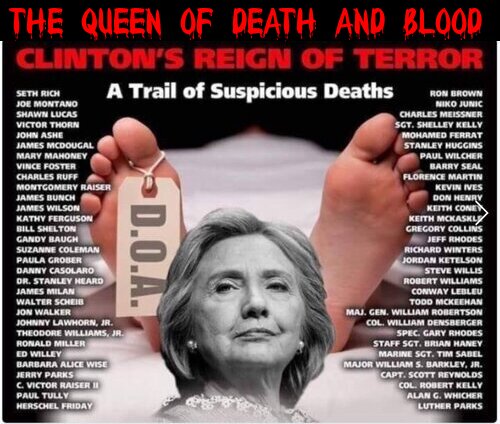 As this thread by ‘Loki Sullivan‘ over at the Reader App titled “Complete List of #Clinton Associates Who Allegedly Died Mysteriously or Committed Suicide Before Testimony, Including Jeffrey #Epstein“, the number of people surrounding Bill or Hillary Clinton who have died mysterious deaths, including numerous body guards and others who were preparing to testify against them, is absolutely astounding.


Numbering 46 currently, why would anyone anywhere in the world have so many suspicious deaths of ‘associates‘ unless the victims knew something horribly incriminating about the Clinton’s? As WND reported in this July story soon after Epstein had been injured in prison, WND themselves had compiled a list of 33 different cases involving mysterious deaths and Clinton associates including:

Attorney Shawn Lucas, 38, who helped serve the DNC with a lawsuit claiming then-DNC chairwoman Debbie Wasserman Schultz “rigged the [2016] primary for Hillary Clinton” and days later was found dead in his bathroom. The cause of death wasn’t determined.

Another was former U.N. official John Ashe, founded dead in his New York home. Officials said it was a heart attack, but local police said his throat had been crushed by a barbell.

Another man, an MI6 spy who had illegally hacked secret data on Bill Clinton, was found dead, naked, padlocked and stuffed in a duffel bag in a London hotel bathtub. Scotland Yard said it was a suicide.

If anybody else in America had that many mysterious deaths surrounding them, especially the deaths of former associates who were getting ready to testify against them, those people would have the book thrown at them by the DOJ. And yet here the Clinton’s are, decades after the long string of mysterious deaths began, still walking free, attempting to dictate politics to Americans, and still distorting truth and reality in America. And the ‘Russian collusion lies‘ clearly starting with Hillary as Susan Duclos had reported in this October 18th ANP story titled: “It Is Official, Hillary Clinton Completely Loses It As She Accuses Jill Stein & Tulsi Gabbard Of Being ‘Russian Assets’ – Has Clinton Started To Believe Her Own Propaganda Campaign?“.

As William B. Stoecker had reported in this October 17th ANP story titled “America Is Going Through A Classic Case Of Luciferian Inversion: With Decades Long Trail Of Dead Bodies Following Them Wherever They Go, The Clinton’s Are A Perfect Example“, the Clinton’s being looked at by the left as heroes when they’re really mass murderers with government protection is one reason we’ve witnessed the ‘satanic inversion of reality‘ in America where good is looked at as evil and evil seen by the hypnotized masses as ‘good‘.

And as Stoecker had bluntly stated within his story, echoing the words of America’s Founding Fathers who very wisely worked the 2nd Amendment into the US Constitution, as long as America has become a ‘banana republic‘, where government itself insane believes itself to be above the rule of law, “Americans Owe No Obedience To Tyrants: ‘Resisting Tyranny Is Obeying God‘”. From Stoecker’s story.:

We need to realize that, in a nation with no rule of law, patriots are no longer morally bound by government law. Certainly we are subject to God’s natural law, summed up in the Ten Commandments and the Golden Rule. But we are not subject to, for example, tax laws or weapons laws. Of course it would be wrong to take the law into our own hands if the law was in the books where it belongs and based on our late, great Constitution.

But it is not…it is in the hands of our corrupt masters, who enforce it or not as they see fit. And while no one is advocating violence, we are morally justified in resisting their will via massive civil disobedience as the left always does, in fighting back if attacked by criminals, terrorists, or Antifa thugs, and as our Founding Fathers perfectly understood, Americans and free people all around the world, even in Hong Kong, are always justified, and encouraged, to resist tyranny. 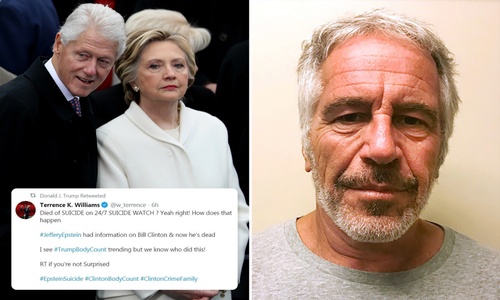 With America now incredibly similar to a banana republic according to money manager Michael Pento as was reported in this recent story by Mac Slavo over at SHTFPlan and heard in the 2nd video at the bottom of this story in which Pento was interviewed by Greg Hunter of USA Watchdog, Pento warns that “we are all screwed.” Largely because of decisions made by ‘the elite‘, with the entire monetary system being ‘juiced‘ and now on the verge of crashing down upon all of us, as Pento warns, once it does, it will be brutal.

Yet we really shouldn’t be surprised about ‘America’s descent into a banana republic‘ with us heading in that direction for well over a decade dating back to the ‘Patriot Act‘ and the slow but steady dismantlement of the US Constitution. As William Stoecker had also reported in this October 17th story, ‘selective law enforcement‘ like we’ve been witnessing in America is a hallmark of tyranny. From Stoecker’s story.:

The one thing worse than a lack of any law enforcement is ‘selective’ law enforcement, a hallmark of tyranny. We’re all familiar with certain African nations, for example, where street crime is largely unpunished and hence out of control, and corrupt officials get away with stealing the country blind, yet citizens seen as posing a threat to the power of the elites are routinely railroaded into prison or executed.

It is depressing and infuriating to see that the US is beginning to resemble one of these corrupt Third World hellholes in more ways than one. Going at least as far back as the decisions of the Earl Warren Supreme Court in the fifties, actual criminals seem to have almost unlimited rights. District Attorneys often refuse to prosecute even violent repeat offenders, and if they are prosecuted they often get off on some technicality. Executions are rare and the recidivism rate among those who have served their (often very short) sentences is high. Members of favored minorities who attack Whites are often never arrested, and the same is true of the violent and cowardly thugs of Antifa and other left wing fascist groups.

And while I’m quite aware that the theory I’ll broach to you here in closing is controversial, as you know, ANP will never shy away from controversy. So with the release of this story that Jeffrey Epstein was likely murdered instead of committing suicide getting so much play from the mainstream media, are we REALLY witnessing something even more devious with that story also only more ‘misdirection‘ from ‘the truth‘?