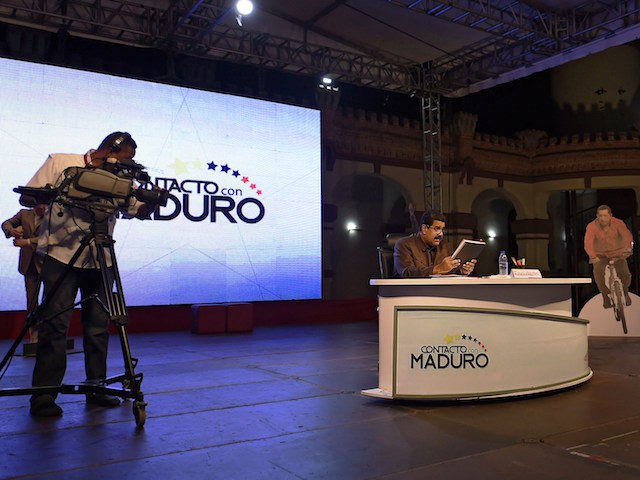 This is the second in a series of articles on life in Venezuela two decades into socialist rule. The series begins here.

CARACAS – Venezuela’s freedom of speech was mutilated long ago. It wasn’t done overnight but, rather, carried out through a series of incremental steps that led us to this point.

When I was young, comedic shows like Radio Rochela existed, in which the politicians were often the center of ridicule and satire. Today, no one would even dare to attempt something like that because the TV channel would be shut down within hours.

The left’s inability to make memes aside, they should be grateful that they have the ability to freely mock, satirize, and ridicule public figures without fear of being thrown in jail. If I were to adapt some of the “jokes” they’ve fielded against U.S. President Donald Trump to apply to Hugo Chávez, Nicolás Maduro, or any other high ranking member of the government, then could very well be facing twenty years in prison due to the new “anti-hate speech” law passed by the regime in late 2017.

There are people in Venezuela right now that have been arrested for the sole crime of posting something on social media. A group of firemen is facing up to twenty years in prison for comparing Maduro to a donkey in a viral video. The First Amendment is one of the things I admire most out of America — it’s a freedom of speech some of us can only dream of.

There is a reason why most of my tweets are in English and I dance around words, not directly naming anyone unless it’s required, because I’m at constant risk of getting jailed due to “hate speech.” If I get arrested then who will take care of my brother?

The biggest Venezuelan TV channel, RCTV, was shut down in 2007 for its open anti-Chávez stance. The remaining private local TV channels have self-censored to stay afloat while the state continues to expand its massive media apparatus. The largest state TV channel, Venezolana de Televisión, is nothing but a perpetual propaganda machine that presents a nonstop twisted reality riddled with the regime’s ideological payload.

Several international media channels have been outright banned from airing. Three of them were banned because they aired the Venezuela Aid Live concert that took place in February 2019. The German Deutsche Welle is the latest international channel to be taken off the air within these borders.

Globovisión, a news network, was sold in 2012 to people with ties to the government; some of the new owners have been recently sanctioned by the Trump administration.

Newspapers and radio have been subject to censure and closure as well. According to Venezuela’s National Press Workers Syndicate, 115 media outlets were closed between 2013 and 2018. Many newspapers have migrated to a digital format since the government refused to give them supplies (they control the import and distribution of paper). Cellphones stopped being safe a while ago. The government has no qualms about airing recorded conversations between opposition figureheads whenever they want to push a narrative.

With all traditional forms of media censored or outright neutered, the internet and social media have taken a pivotal role and they’ve rapidly become the main way for us to be informed (and inform) down here.

Of course, the regime has begun to tighten its grasp on this medium, too.

Our internet is among the world’s slowest, and it’s starting to be heavily censored as well. Most people (myself included), due to a lack of reach and service availability by private ISP alternatives, are forced to use CANTV, the government-run ISP and the most used domestic internet service provider.

Control and censorship of the internet has been a long-term goal for the regime that goes back to the late years of Chávez’s presidency. In 2010, the regime carried out some early attempts to censor the internet through laws. One of its most outrageous goals was to establish restrictions on the type of content based on the time of the day — much like how it’s done on television.

Everyone with two brain cells knows how absurd this would be – then again, this project was spearheaded by people who thought Internet Explorer and Mozilla were two different internets.

Nonetheless, the first concrete internet censorship cases targeted websites that showed the black market exchange rates, such as DolarToday. These first cases of website blocking were easy to circumvent with a simple change in your DNS settings.

The regime’s methods of censorship have become more sophisticated recently, selectively blocking websites and social media whenever the opposition leadership does a livestream (since they can’t be aired through local TV stations). Selective traffic throttling during specific hours is another of their tactics, one that I can sometimes bypass by spoofing my router’s MAC address in hopes that I land an IP address on a non-throttled gateway.

Wikipedia was banned for a couple of weeks because of an edit war that took place in their “President of Venezuela” entry. Access to the TOR network has been severely restricted as well, which was often used to circumvent the ever-growing censorship. The government has been caught in acts of phishing as well and, according to leaked documents, they’re actively engaging in the formation and maintenance of online “Troll armies”.

China has exported their censorship and control ‘expertise’ to Maduro’s regime. They have already provided them with the technology and tools required to implement a form of social control, and now the Chinese art of censorship has inevitably extended to our Internet access.  Chinese operators are directly operating inside CANTV’s infrastructure in order to selectively suppress and inhibit access to specific websites and services.