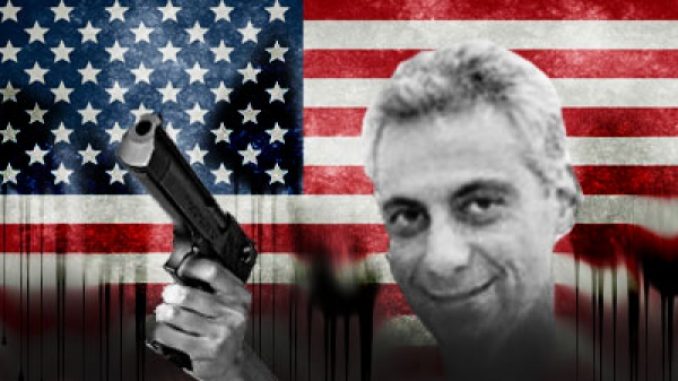 The Murder Capitol of America: What’s Going On in Chicago?

The capitol of the heartland is the once great City of Chicago. The city, the heart of the greater Midwest, was once the center of commence for the rest of the heartland. Today; however, it is a wasteland of crime with a murder rate that rivals third world nations deeply engulfed in war. The question is, what’s going on in Chicago?

To say that Chicago is a victim of over a hundred years of one party Democrat rule would not come close to understanding the depth of the problem. Many cities, like Detroit, have the same background; however, they don’t come close to the murder rate of Chicago. While the homicide rate in Detroit isextremely high, it pales in comparison to Chicago. The problem lies in how Chicago got to where it is today, and the deep seeded corruption that
emanates from the top.

Chicago could also be called Richard Daley City, because between Father, Richard J., and son, Richard M. Daley, the city has a combined 43 year Daley stewardship. From 1955 until his death in 1976, Boss, Richard J., ruled over the city where he built the worst housing projects in the nation that led to a crime wave that could not be controlled. His big money backers all earned huge incomes from those projects. Corruption has always been a big part of the equation in Chicago politics.

From 1989 until 2011, Richard M. Daley held the reins at city hall, where his greatest legacy was tearing down the projects that his father built; replacing them with luxury hi-rise apartment and attracting wealth back into the city.
Daley Jr.’s big money backers made even more than under Daley Sr. To maintain this rejuvenation of wealth, Daley understood that crime needed to be kept to reasonable levels.

Both senior and junior, fully supported the police and their efforts to control crime. It showed in the crime statistics under each mayor, where in the thirteen years between them the crime rate grew when police support waned. The Daley’s knew that in order to maintain a robust city they needed an effective police department with minimal interference, both local and federal.

In 2011 Daley retired and was replaced by Rahm Emanuel, a feisty socialist know it all, who cut his teeth as President Barack Hussein Obama’s first Chief of Staff. Therein lies the clue to the downfall of Chicago. Emanuel put into practice what Obama was trying to do for nation. Obama hated the police; and Emanuel found himself in a position to do something about it.

Rahm placed socialist political policy over corruption. It is the reason he did not run for a third term, even though most state it was due to his cover up of the police shooting of Laquan McDonald as the reason. That is not the
reason, he lost his big money supporters, used to getting their share of the pie. Due to the murder rate and fleeing middle class in the city because of high taxes and restrictive business laws, all a part of the socialist agenda, the big money donors went looking for someone who could better support their corrupt needs.

As part of that socialist agenda, after taking control of city hall, Emanuel implemented changes to the police department that hindered their ability to investigate crime, and pandered to minority voters, providing cover for criminals, a situation that had never before been allowed. City hall no longer supported the police department, nor did they hide their disdain for law enforcement.

Emanuel was so controlling that he directed strict enforcement of the wealthiest areas, trying to please his big money donors, while prohibiting aggressive patrol in the poorest areas trying to pander to the victim class of voter. This led to a wild lawlessness in the poorer areas of Chicago.

Shortly after taking office, Emanuel enacted three changes to the Chicago Police Department. He closed down detective bureaus in Chicago’s highest crime districts, disbanded the Gang Crime Units, and in conjunction with the ACLU, instituted mandatory filling out of voluminous forms each time officers or detectives stopped someone.

On these forms officers had to justify why they made the stop and how they chose the subject to stop. It put an abrupt end to investigative stops, more commonly known as aggressive or proactive police work. These policies have made it much harder to catch criminals. Prior to this officers filled out contact cards which aided gang crime investigators and detectives in clearing crimes because they provided nick names, tattoos, addresses and known associates. All very valuable information that helps solve crimes. The new ACLU approved forms put a stop to this information.

When you don’t catch criminals, the result is more crime. The proof comes from crime statics which show that the Chicago Police homicide clear up rate prior to Emanuel was at 67% as far back as 1991, but plummeted to a mere 17% in 2018, after Emanuel’s interference with the police department. With an 83% chance of never being caught, what was to stop gang members from random shootings or wonton murder, when as they saw it, they would never go to jail for their crimes?

That lawlessness spread to the wealthier areas, as could have been expected by anyone who wasn’t in fantasyland, but stricter law enforcement in those areas mostly held the overwhelming wave of murders and shootings to the poorer areas of Chicago, giving Emanuel the moniker of the ‘rich man’s mayor.’

Emanuel did one other thing that decimated, literally, the police department, he froze police hiring. The police department is almost 2500 officers short of allotted numbers. Not only do Chicago Police have their hands tied behind their backs trying to protect the citizens of Chicago by bad political policies, they don’t have the numbers of officers necessary to fulfill their mission.